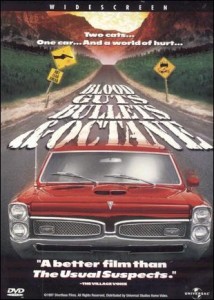 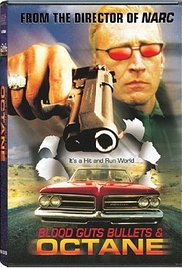 One Liner Review: Joe Carnahan’s first film feels like a student film version of reservoir dogs without all the things that made reservoir dogs so great.

Blood, Guts, Bullets, and Octane, despite its catchy title, are a very lousy movie. The only reason why anyone would ever rent it is because it’s Joe Carnahan’s first film. And his second film was a great success. So were most of the other things he did thereafter. Carnahan has always been known as a guy’s guy’s director, a real bad ass. His most recent movie, the grey, is probably his best film to date. For one thing, it is totally original. Sure it’s a sort of combination of alive and cliffhanger, but it really comes down to a movie about a bunch of guys trying to survive being stranded, the arctic cold, and a pack of hungry wolves. The wolf’s part is what makes it so original.

Carnahan’s first big movie was Narc. That’s what brought him to the attention of the public. Narc is a good movie, filled with tough ideas and a very gritty style. it also gets great performances out of Ray Liotta and Jason Patrick. The only problem is that its ideas are a sort of recycling of the Japanese Kirosawa film, Rashomon. The setting is of course different, this movie being a police thriller and not a samurai rape movie, but still. The basic concept about seeing an event from all different points of view is the same.

After Narc, Carnahan had some disappointments. There were smoking aces, with its star-studded cast, that turned out to be too much for this director to handle. There were too many characters and story lines and the base story at the heart of the film wasn’t all that great to begin with. And after smoking aces, he made the team, which was also pretty lousy. The comedy wasn’t funny and the action wasn’t all that exciting.

But with Narc at the start of his career and the grey as his most recent film, Carnahan has two excellent films under his belt. And so I went digging into his career a little further and rented his first feature. And boy was that a mistake. Blood, guts, bullets, and octane feel like a student film. It is so poorly and cheaply shot that it really feels like a bunch of college students set up shop in local bars, focused the camera on two guys sitting at the bar talking, and thought they had a movie.

The movie is about two used car dealers. Carnahan plays one of the guys. And these two fellas are not doing very well with their business when some guy who owes them a lot of money offers them a deal. He doesn’t have the money to repay them, but what he does have is a car. And that car is worth a lot of money. All the boys need to do is let it sit on their lot for a few days and then they will be paid generously for their efforts.

Only they don’t do that. They mess around and wonder what’s in the car and decide to pursue an answer. They are told that if they try to drive the car or try to open the trunk then the car will explode. So they don’t do that. Instead, they bring it to their friend, a mechanic, to take a look and let them know what he thinks.

There isn’t much else going on. There’s a long blonde haired hitman that is coming to town and keeps killing people in his path. And he’s one of the guys who are responsible for the car and having it sit at the dealership. And it’s only at the end that we find out what was in the trunk and why it was so important. That one moment of the film is kind of cool, but otherwise this movie is an absolute mess.

The reason why it’s such a mess is because it is so poorly made. The story doesn’t move, but just sits there, throwing us into one boring conversation after another. And then there are constant black and white slow motion shots that are completely unnecessary. Every time someone mentions a gun or a threat, we see a quick black and white shot of a gun going off. It is very annoying.

I definitely think this movie wanted to be like reservoir dogs, and there’s a whole bunch of reasons why. The first is how wordy the movie is. It is basically all dialogue. It’s characters talking fast and talking over each other and constantly arguing with and insulting each other. the dialogue is meant to sound like taxation’s with characters constantly pointing out each other’s mistakes, only it really doesn’t sound like Tarantino at all. Even when the movie dissects a Johnny Cash song and talks about what it really means, it doesn’t get anywhere close to the conversation about Madonna’s “like a virgin,” song that opened up reservoir dogs. And clearly the movie is trying to copy that scene.

Another thing this movie does in an attempt to be like dogs is a use title card for chapters. And while Tarantino does this in nearly all of his movies, giving us a few chapters in each movie, Carnahan’s film overdoes it, big time. Just about every scene in this movie has it’s own title card. Can you imagine? We have to sit through about thirty different black screens with a title floating at us about what’s about to happen. There is no reason for this many, and really no reason for the movie to be using title cards at all. Tarantino might do it all the time, but he always has a reason for it. The title cards fit the stories of his movies (which are usually numerous stories packed into one). Joe Carnahan’s debut movie, Blood, Guts, Bullets, and Octane is an absolute mess and a pretty terrible experience.