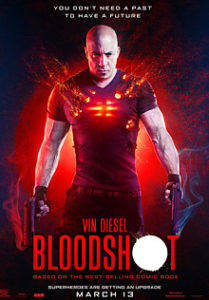 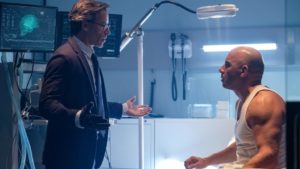 There’s one cool idea to this movie, about how a company manipulates a man into doing their killing for them, but other than that this is a pretty dopey action movie.

Not a good movie in any way, this one has an intriguing enough premise, but nothing more. The premise is that a company has found a way to bring soldiers back from the dead, and use them as assassins. They do this by manipulating them. And they do that by going into their memories and changing things around. In the case of Bloodshot, (Vin Diesel,) his wife and he were murdered, and the company changes the face of the murderer in Bloodshot’s memories, over and over again, to have him keep going after new targets; This could have worked if it had been handled differently. Maybe if each target he went after was interesting in its own way. But instead, we get a movie that has a misleading trailer, (makes it look like a take on Groundhog Day,) some lousy CG action, and a plot that is both transparent and also seems to be stalling way too often because it is out of ideas. Not exactly a fun time at the movies.

Bloodshot is a pretty bad movie. That’s to be expected when you consider the cast and even premise at work here. Vin Diesel is a movie star because people like the Fast and Furious movies (and I’m one of them.) Those movies made him into a fun-loving tough guy, but the truth is Diesel hasn’t been very good in anything else, (unless you count him voicing Groot in the Guardians of the Galaxy movies.) There have been other action movies that tried to showcase this guy in different ways, from the revenge thriller that was A Man Apart to the sci-fi series Pitch Black movies to the XXX: Xander Cage movies. None of these were very good. Diesel just isn’t the kind of guy you can go to bat with. He’s not the kind of actor you really want to spend two hours with. Either that, or he’s just really bad at picking projects. And Bloodshot is no exception.

The movie is based on a comic or graphic novel, which sounds promising. It means that there’s a lot of material there to pull from and work with. And so what one would hope for is this movie took the time to find the best and most interesting ideas in the comics and turn those into the storyline for the film. No such luck. The story here is an origin story if ever there was one, and it’s pretty lame. Vin Diesel’s character, named Bloodshot, is a special forces military man who runs raids on the enemy and goes where the government tells him. We see him lead a team into killing some faceless bad guys at the beginning. There’s a cool moment where he tricks a killer into pointing to a phone in order to get a shot on him, but that’s about it in terms of anything worthwhile, interesting, or entertaining going on during these scenes.

After pulling off a particularly challenging job, Bloodhshot (Still can’t believe that’a the character’s name,) and his girlfriend take a vacation somewhere on the Amalfi Coast, and that’s where they are attacked by a team of villains who have been following them. They are taken to a meat freezer where Bloodshot’s girlfriend is killed right in front of him. Then Bloodhshot is shot and killed as well. When he wakes up, Bloodshot is in a lab being told that he died and that this is just the robotic version of his body. That’s a hell of a thing to lay on someone. And it might have come as a better surprise or more impactful scene if the movie waited a little while before having Bloodshot learn that. If he began to work for and trust these guys, or somehow continued his life with things coming back to hm slowly, and only later did he learn the truth about himself. It could have been kind of Sixth Sense-ish, and a hell of a lot more compelling than just telling him right away.

But the movie does tell him that he was killed as quickly as it can, with Dr. Emil Harting (Guy Pierce,) as the head scientist who explains everything. And then we get into how this new robotic body he is in, is capable of superior things. We see him punch through a wall and regenerate cells when he gets shot. That’s it. It might have been cool to see him have amazing jumping abilities or something like that,  like in the movie John Carter. But Bloodshot’s powers are basically standard cut of the mill abilities. Even his regenerating is something that we have seen again and again in other comic-based movies such as Wolverine in the X-Men films. Now it does look kind of cool here, with the blood flying through the air and then moving backwards to reform, but we don’t it’s really only used once or twice, and then we move on.

Bloodshot stays at this facility for a little while, meeting the three other “test subjects,” who have been robotically rebuilt and now work for Doctor Haring. One of these is a woman named JT, (played by Eliza Gonzalez, who was so good in Baby Driver,) and she has a soft spot for Bloodshot. She lets Dr. Harting know that what they are planning to do to Bloodshot is wrong, but she goes along with it anyway. Maybe that’s because the company controls the breathing aparatus under her neck, and can shut off the air anytime they’d like. She’s the only female character amongst a bunch of guys, and the love interest here.

The overall story is that the company is using Bloodshot as an assassin, and the way they do it is by going into his memories and changing the face of the killer. They completely wipe out the face and then replace it with another person’s face each time. Then when Bloodshot wakes up, his immediate goal is to find and murder the man who killed him and his wife. It’s a creative premise. But there needs to be more. Otherwise, it’s pretty just a one-liner idea and not a whole lot more. The trailer makes it look like this movie will be an action-movie take on Groundhog Day, which is a pretty cool idea. Groundhog Day is, of course, the film where Bill Murray lived the same day over and over again, not knowing why, and searching for a way out of it. About twenty years after that film, Edge of Tomorrow took the concept and reworked it as an alien invasion action film. The results were pretty thrilling.

The problem is that since Edge of Tomorrow made it okay to rework the idea, tons of other movies have gone the same route. The floodgates have been opened. So we have the horror movie version (Happy Death Day,) the comedy version (Palm Springs,) and now another action movie version with Bloodshot. And even though the idea has been done over and over again at this point, it still might have been interesting. After all, each of those other movies is pretty good in its own way. Bloodshot is the first movie to try using the Groundhog Day concept and turn out to be a disaster. And maybe that’s because the movie doesn’t really use the concept. The trailer advertises a song that’s uses again and again to reset the character’s memories and mind. That song, and these sequences are not in the movie at all.

Instead, the song is replaced by “Psycho Killer,” by the Talking Heads, which is a fine song. Only it doesn’t do what the other song was doing in the trailer. It isn’t being used to reset the memories, but simply as a song playing in the background while the murder takes place. And we only see it twice. So it’s hardly, “Baby, I’ve Got You Babe,” from Groudhog Day, being repeated over and over again as. a way to indicate that we are reliving the same day once again. And as far as that reliving the same day idea goes, it’s barely in this movie. We maybe see the murder of Bloodshot’s girlfriend happen one other time, besides the first time, and that’s about it. There certainly isn’t the repetition of ideas, with it being just a tiny bit different each time, mainly because of the way our protagonist reacts different each time he goes through the events.

Maybe the reason why this movie doesn’t use the Groundhog Day premise (even though it sure does advertise that it does in the trailer,) is because Bloodshot knows exactly what’s going on with him. In Groundhog Day, Edge of Tomorrow, and all of those other films, the protagonist had no idea why this was happening or who was doing it to him, and so going through the same situations day after day seemed very strange and hard to believe. Here, with Bloodshot waking up and being told he is dead, and learning all these new rules to his situation, it seems like anything goes. So repeating the same day (even though this movie doesn’t really do that,) would not be such a big deal. So

The movie Bloodshot takes a cool concept and handles it in all the wrong ways. First, it doesn’t use the Groundhog Day concept at all, the way it advertises that it does. Second, it tells the protagonist as soon as he wakes up, exactly what’s going on. There goes the mystery and idea that he can discover it on his own, or that we can discover what’s happening alongside of him. The action is overly computerized, which means it looks pretty fake. And even the mech-suit that a character wears at the end, which looks really cool in the trailer, turns out to be a little nothing here. Nothing compared to other much more elaborate mech suits that we’ve seen in other movies, from Avatar to Edge of Tomorrow to the third Matrix film. The action is not memorable in any way here, and the story might have a cool initial concept, but it really doesn’t do anything with that or know how to make it work for an entire movie. Because of all this, the movie turns out to be pretty lousy.