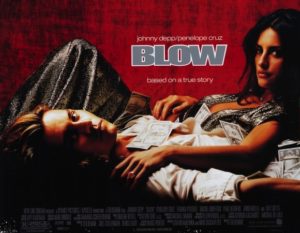 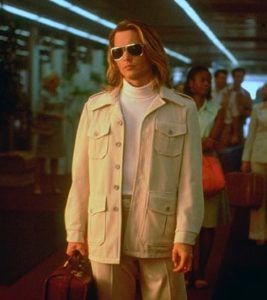 A Scorcese-like telling of the Pablo Escobar drugs story and how they made their way into America at the hands of one man.

A pretty solid movie, this one very much feels like a Scorcese film, even if it isn’t one. That means it includes the pop rock seventies soundtrack, the voice over, the freeze frame, and the quick cuts. What it doesn’t include enough is the violence. Luckily that’s about the only place where this movie is lacking. In terms of storytelling, it does a great job, with the story constantly evolving. And the casting here is right on the money with them really digging up talented actors for some of the smaller parts, from Ray Liotta to Franka Potente to Paul Reubens. The soundtrack is dynamite and the pacing really carries this thing along so that we feel like we are right there, with George Jung, living his life of excitement and energy. It’s a pretty great movie.

Blow is a pretty solid attempt at telling the story of the American contact and drug dealer for Pablo Escobar, the biggest Columbian drug kingpin of the 1970s and 1980s. This character is George Jung, (played by Johnny Depp.) There have been countless movies and TV shows about Escobar and those who worked for him, (another somewhat recent one is the Tom Cruise movie American Made, about Escobar’s American pilot.) There’s also the Netflix show Narcos, which chronicles his operation. And why not? As Jung puts it in this movie, “if you were doing coke in the 1970s or 1980s, there was about an eighty percent chance it was their stuff that you were using.” That’s how big this guy, Escobar, was. And Blow is quite possibly the best movie to showcase that.

The movie was definitely made in the same vein of Goodfellas, meaning director Ted Damme seems to have approached this one to tell the story as if Martin Scorcese were telling it. This includes using Jung’s voice over, using a wide array of popular rock n roll songs from the time, using freeze frame and slow motion, and using quippy dialogue. But what Demme is missing, and what would have really gone a long way here, is the violence. It does appear in the movie, from time to time, but almost always off camera or out of focus. It’s in the background, whereas Scorcese would have put it right up front and center. After all, what would either Goodfellas or Casino have been without the violence and Joe Pesci character (he basically plays the same character in both.) The Goodfellas scene where Pesci asks Liotta “why am I funny?” has no real violence in it, and yet it is scary as hell, because the movie has already established Pesci as an Uber-violent and intimidating character. Blow never does this. It’s the one thing missing that would have really brought the movie to the next level.

But pretty much everything else about the movie works, and taking the Scorcese approach in all areas besides violence is definitely a smart move, (I guess if we want a movie about violence and drug dealing during this time, there’s always Scarface.) From the very opening scene, in the fields of Columbia where we trace the steps of how the cocaine is grown and then processed, set to the Rolling Stones song, “Can You Hear Me Knocking,” the movie gets things off on the right foot. (Other great songs featured here include Ram Jam’s “Black Betty,” Manford Man’s “Blinded by the Light,” and Lynyrd Skynyrd’s “That Smell.”) After the cocaine processing opening, we meet a young George Jung, living with his parents, played by Ray Liotta and Rachel Griffiths, (Liotta, a nice Goodfellas connection.) Both of these actors are terrific in the movie, especially Liotta, playing the kind of guy who thinks his son can do no wrong. At least not enough for him to ever turn his back on his son, and stop supporting him. His mom, on the other her hand, has a very different relationship with him.

The connection between father and son is established early with scenes of Fred, (Liotta,) taking his son to work. George’s voice over explains how his father owned his own construction company, and how he tried to earn an honest living, but in the end, the banks caught up with him, and there was no escaping bankruptcy. All of this clearly taught George that there was no way to succeed with honesty and that it was the man who was willing to bend and cross the lines, who would really prosper. And so George moved to California with his best friend, Tuna, (Ethan Supply,) and the two of them began a life there, looking to sell drugs.

The drug here was marijuana. We watch as George and Tuna meet two girls who live right above them, (Barbara, played by Frank Potente, goes for George,) and then get connected through these girls to a man who will supply them with drugs. First, we get George’s take on California, which was the mellowest, most fun place. Everyone was partying all the time, and everyone was always getting high. Ans so George saw an opportunity and got Barbara to introduce him to Derrick Foreal, (played by Paul Reubens,) the man who would become his supplier. One thing pretty amazing about this movie is its casting. This is one of those films that did its research, and dug up some terrific stars who weren’t exactly on the A list. Reubens was a rare gem, (he had very few screen credits other than Pee Wee Herman, including Mystery Men and Buffy The Vampire Slayer.) Franka Potente was coming off of Run Lola Run and The Bourne Identity, but was also not very well known, and even Penelope Cruz was pretty new to the acting scene, (at least in terms of American movies.) The casting went all the way down the line to include Liotta, Rachel Griffiths, and Ethan Supply. Even Cliff Curtis, (an actor who seems to be used every time a movie needs an actor to play a part that looks “ethnic” these days,) was pretty unknown back then.

Whether you knew exactly who all the actors were or not, their faces were certainly familiar, (most people probably couldn’t name Potente, for example,) and they were all mega-talented, whether they had been given the credit for it or not. Another one of these actors has got to be Max Perlich, (Drugstore Cowboy, Beautiful Girls,) and still another one is Bobcat Goldthwait. The list goes on and on. But the casting is just one of many accomplishments of this film. Another one is the way that the story really puts you at the center of what was going on with Jung, from showing his mentality since childhood to chronicling his experience once arriving in California. Jung set up a team with Derrick, Tuna, Barbara, and even Kevin, (Perlich,) Jung’s childhood friend who became his contact back in the midwest. And the movie uses quick cutting to show us exactly how this team worked, with Barbara working as a flight attendant, bringing the drugs in her bags, onto the planes and across the country to Kevin, who unloaded them out east, and sent George the profits.

The movie misses a few steps right around the time that George is first arrested. It doesn’t show us how George was caught or arrested, but just jumps right to him getting his mugshot taken. And it also doesn’t tell us anymore about what happened to Tuna. Up until this point, the movie was hitting every beat exactly right, even showing us a scene of George taking Barbara out to eat to meet his parents for the first time. But then he is suddenly in jail, and we are wishing we saw the scene where the cops caught onto him. Now, this isn’t such a big deal because we will get many other scenes where the cops bust him throughout the film, (there are three other memorable ones, from them coming when his mother turns him in, them busting up a birthday party of his, and them coming as part of a sting operation and setup, designed entirely to catch George after the completion of a job, at the end.) So not getting this scene here isn’t such a big problem, (maybe Demme felt like there were too many scenes of the cops busting him, and so this was the one that had to go.) But not hearing about Tuna anymore seems like a mistake. This guy was his right hand man. Throw in just one line of dialogue where Jung explains what happened to him.

What we do get is Jung telling us that he ran away from California to escape his bail in order to take care of Barbara (who was sick with cancer,) and then after she died, just kept on running. And that brings George to his parent’s house, where his mom turns him in, and then let’s him know that it was her, (prompting her to get looks of death from both George and his father.) And it’s in prison now that George meets Diego, his cell mate who will be the man that connects George to Escobar. When Diego asks George what he is there for, George tells him murder. And it isn’t until the two of them are teaching a class together to inmates, trying to knock off some of their sentence time, that George reveals to the students, he knows everything there is to know about selling drugs and is willing to teach them. This makes Diego’s eyes light up.

Once the two of them get released, George finds a brand new opportunity doing the same old thing, only on a much larger scale. And with a new drug. Cocaine. He flies down to Columbia, meets Escobar, (Cliff Curtis,) and the rest is history. George unloads the drugs in the states in no time. He goes through it, and turns it into cash, faster than they can grow the stuff. He is so good at his job, and so valuable to Escobar, that when George steals the finance from one of Escobar’s men, nobody does a thing about it. George even explains, in voice over, that breaking up a Columbian marriage was a capital offense, but he was too valuable to Escobar for anyone to even think about touching him.

The movie keeps evolving with it’s plot, and in the second half is pretty much about a whole new lifestyle. This includes a new partner, (Diego,) a new woman, (Mirtha, played by Cruz,) a new drug and a new supplier. The one thing that George keeps from his former life, as a pot dealer, is the man who supplied him with all of that, Derrick. George now uses Derrick has his distributor back in the states, and refuses to reveal Derrick’s name to anyone. And this becomes a major plot point in the second half, with Diego furious that George won’t tell him who he giving the drugs to. Things get pretty interesting when George eventually does fill Diego in, and that includes the event that leads to George breaking his rule and telling Diego his secret. And then the final portion of the story is about George’s daughter, and how much she means to him. It ends on a pretty heart-breaking note. And it’s perfect for such a powerful movie. Very well-told, well-made, and well-executed, this is a hell of a film.