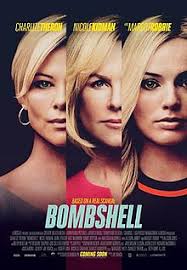 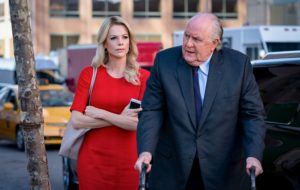 A pretty good movie that tells the story of sexual misconduct and harassment at the workplace of Fox News, through the eyes of three different women.

Here’s a movie that tells the story of the Roger Ales, Fox News scandal, where he, Bill O’Reiley, and a number of other male employees were harassing women at work. It tells the story of the women through the eyes of three different characters. There’s the veteran reporter who is now being fired after not submitting a while back, (Gretchen Carlson, played by Nicole Kidman.) There’s the reporter who is currently going through this, the new, young, and innocent one, (Kayla Popsial, a fictional character, played by Margot Robbie.) And then there’s the woman who is on the fence, not sure where she stands, still on the ins with the company but able to see what’s coming, and what she needs to do. This is Megan Kelly, played by Charlize Theron. The three women represent a sort of past, present, and future telling of the story, meaning that Carlson is way down the line into the future of what will one day presumably be the fate of Kelly and Popisal. For Popisal, on the other hand, we experience the fish out of water story, seeing the fine details of exactly how everything works. The movie is pretty good in telling a full rounded out picture. There’s just one problem. Because Popisal is the only one who is currently dealing with the film’s villain, Roger Ales, we only get to see what he does to her, and not to the other women. And we don’t really hear much about it either. It can be assumed that he did the same thing to each of them, but considering that so much of this movie hinges on Roger’s actions, it would have been nice to know a little more.

Bombshell is good, but not great. It tells the story of three women, but probably would have been better if it told the story of only two or one. You see, the story is incredibly interesting. It’s about these women who were being sexually harassed at Fox  News by their employer, Roger Ailes (as well as by some others.) But the movie seems more interested in giving us a rounded picture telling us a little bit of each story, than it does in going for the jugular, and getting into detail about any one of them.

With a movie like this, the exciting parts are also the most upsetting parts. They are the moments when Ales does the best extreme and inappropriate things that will get him into trouble. But the movie doesn’t feature enough of that or enough information about it. For example, we never really learn what happened to two of three protagonists, the Charlize Theron character, Meghan Kelly, or the Nicole Kidman character, Gretchen Carlson. We know that somehow they were harassed at some point, but that’s about the extent of what we find out about them.

Now, the movie definitely does that on purpose. It doesn’t want to spell everything out for us, and instead wants us to go through the movie feeling the same way the public, or even an employee at Fox News might have felt… not knowing. Having suspicions and ideas, but never having anything confirmed. Walking on eggshells, trying to put the pieces together ourselves, instead.

So instead of really getting into the story of Meghan Kelly and her experience being harassed by Ales, the movie spends the first half of her story dealing with Trump and the way she grilled I’m by asking about the how he refers to women in demeaning ways. Kelly got sick right before monitoring the debate and was vomiting in the bathroom. The question comes up as to whether or not she may have been poisoned. Nothing comes of this, of course, it is just a suspicion and a question to throw out there, to get us thinking about the toxic environment these characters live in.

The Kelly story with Trump and this debate goes on to showcase the situation where Trump made some very strange and inappropriate comments about her. “She has blood coming out of her eyes. Blood coming out of her…wherever.” My guess is that Trump didn’t hear himself say that in his head before saying it, and realize how it sounded. But it sure did sound like a crack about menstruation, and the movie milks they situation for all it can get. That means it shows us the events before, during, and after the comment, as Kelly, and her attack by Trump, becomes the story.

None of this really has to do with Roger Ales and the harassment situation. And that’s the problem. The movie is a little too all over the place. It wants to tell the story of the environment for female reporters over at Fox News, but is very careful to pick and choose exactly what it tells and what it doesn’t. So we don’t just get the story of these three women, (the third one being Kayla Pospisal, (Margot Robbie, the young newbie who Ales sets his sights on,) but also about a fourth woman, Jess Carr, (played by SNL’s Kate McKinnon, who might actually be more interesting than all of the others.)

Jess’ story is that she’s a liberal lesbian working at Fox News. She understands how to play the game, and so when Pospisal comes to her, wanting to talk about that happened with Roger, Carr tells her she can’t help. Carr knows that anything Pospisal tells her, Carr might have to give up in order to save her own job, if she is asked.,So Pospisal is better off not telling her anything at all. But the two of them do have a one-night-stand where it is revealed that Carr has two posters of Hillary Clinton hanging up. Pospisal asks about these, and we get to learn a little bit about Carr’s story.

Pospisal represents the fish out of water character in this movie. She’s the one who brings us the closest to Ales and the way he harassed women. Pospisal is new to the job and looking to rise through the ranks as quickly as possible. When she gets brought up to Ales’ office for a meeting, she has no idea what to expect. She certainly doesn’t expect him to ask her to twirl and then to hike up her skirt so high that it reaches the point where he can see her underwear. It is by far and away the most uncomfortable scene in the movie. But it’s an important one, and takes us in to witness the harassment first hand.

If Pospisal is the character who is currently being harassed, the Gretchen Carlson is the character making the case against Roger Ales for what he did to her in the past. And Megan Kelly is the character caught in between. She’s on the fence, and spends the movie getting to the point where she’s ready to come out and join Carlson’s cause. The case Carlson is building involves the way she was moved from a cohost position on the popular TV show, “Fox and Friends,” to a different, much less desirable time slot. And then once the ratings were low at that time slot, she was fired. Carlson’s story in this movie mainly consists of her taking meetings with two lawyers who will be representing her.

The story here is definitely interesting. Watching the takedown of one of the main offenders of sexual harassment in the workplace makes for a pretty powerful film. One day, we’ll get a movie just like this about Harvey Weinstein, I’m sure. But the problem is that because the movie wants to spread itself so thin by telling the story of three different women, it isn’t able to get into the fine details of any one of them. Everything we see of the Gretchen Carlson takes place long after she had been harassed. If that’s the case, then how about some flashbacks? I suppose the movies point is to tell a sort of past, present, and future story, so that we can see how it unfolds at all different places in time. So we can assume, for example, that if things kept going the way they were, one day Pospisal would be in a similar position to Gretchen Carlson, being fired by the company because she no longer was agreeing to the sexual demand of Ales, (although a fine difference is that Carlson never did agree to those demands to being with, whereas the fictional character Popisal did.) If it’s the past, present, future thing, showing women at all different stages, then I suppose it works, but it would have been nice to get a few more specifics from Gretchen and Kelly, about what Ales did and how these women handled it.