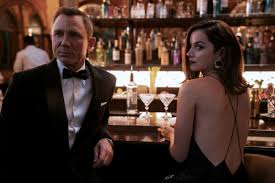 A nice sendoff for Daniel Craig as James Bond, this one isn’t as strong as his better two films, but far exceeds his two weaker movies.

There are lots of good ideas here, including the way that this movie continues the storyline that has been weaved through all five Daniel Craig movies. This time around, a major character is Madeline Swan, the daughter of Mr. White, a character who goes all the way back to the first Craig- Bond movie, Casino Royale. Spectre is also on hand here, as is Chrisoph Waltz as the villain Blofeld. And despite all that, the movie still takes its time to get going. The action is pretty solid and includes a stairwell sequence that’s the best action scene in a Craig Bond movie since the parcor constuction site scene that opened Casino Royale. Yet, despite these things, the movie definitely has flaws. It is way took long at two and a half hours, and the nanobite evil plan seems pretty far-fetched.

No Time To Die is a pretty decent Bond movie. It’s not nearly as good as the two best Daniel Craig Bond movies, Casino Royale and No Time To Die. But its also not nearly as bad as the lousy ones, Quantum of Solace and Spectre. This one is right down the middle, and certainly more good than bad. For one thing, it features the best action sequence since the opening contruction site scene from Casino Royale. It’s a good movie that is just a little too long, and has a really lousy villain. Still, it manages to come out on top in large part due to Daniel Craig really giving it his all and reminding us why he is so perfect for this role.

One of the coolest things about the Daniel Craig Bond series is that there is a continued story that connects each of his five films. The first movie ended with Mr White showing up and with Bond kidnapping him and throwing him into the trunk of a car. The second movie, Quantum of Solace, began with a continuation of this scene, and took us into Mr. White’s evil organization, Qunatum. The third movie featured a villain with ties to Bond’s past, but he was also part of a bigger picture orchestrated by Blofeld, the lead villain in the fourth movie. Blofeld’s organization, Spectre, was featured in that movie, as was Madeline Swan, the daughter of Mr. White. You see how everything keeps tying together? And both White and Blofeld were featured in the final movie. White, through his daughter, Swan, and Blofeld through his appearance and his organization.

In fact, the final movie opens with a sort of call back to a character who was introduced in the first film… Mr White. At the start of No Time To Die, we see Madeline Swan as a child, at home with her sickly mom. Her mom lies on the couch asking for medicine and going in and out of sleep. That’s when a man wearing a Phantom of the Opera-like mask shows up on the ice outside of the house, on a mission to kill the mom. He’s after her because she is wife of Mr. White, and because Mr. White has killed this man’s entire family. It makes for a pretty exciting opening scene and perhaps the first one in a Bond movie that doesn’t feature Bond himself. And it sets up what is to come later in the film.

The only thing that would have made this moment cooler is if we could have seen Mr. White make an appearance. Maybe he could have come home to find his wife killed and to help save his daughter. Madeline did survive, of course, but only because the villain, Lyutsifer Safin, (Rami Malik,) allows her to. Kind of. He does shoot through the ice while young Madeline is underneath it, but apparently he wasn’t shooting to kill, and instead was shooting to break the ice up so that Madeline could get out. But couldn’t those bullets have easily killed her? I suppose we are meant to believe that this baddie knew just what the bullets were capable of, and clearly didn’t want to kill her or else he would have kept firing. Or maybe he first wanted to kill her (after all, she had just shot him, back at the house,) but then had a change of heart. Either way, it’s a cool opening scene that would have only been better if we got an appearance from Mr. White himself, to tie this movie back to the first one. And even though White died in the last movie, featuring him in a flashback here would have been the perfect way to bring him in, and tie this movie back to the first one, Casino Royale, where he was featured at the end.

After that great opening scene, we cut to Bond and Swan taking a vacation together in Italy. They are kicking back, and relaxing, and it seems like his days as a spy are behind him. That is until he goes out to visit Versper’s grave (another call back to the first film,) and assassins attack him. This leads to some very cool action moments including a scene where Bond dodges a car that’s trying to run him down on a bridge by hiding behind a small pillar that the car slams into, and another moment where Bond rides a motorcycle into the air and onto an overlook. We also meet a henchman with a bionic eye, which is a total call back to the original Bond films of the sixties and seventies, where henchmen like Jaws and Odd Job featured unique physical characteristics.

Bond survives the attack, but his relationship with Swan doesn’t. He believes she set him up, which makes total sense since the last woman he fell hard for was Versper and she ended up betraying him. Bond sends Swan off on a train, letting her know that he thinks she betrayed him. And then he goes and retires to Jamaica. That is until he gets a visit from his old pal Felix, (Jeffrey Wright,) a character who has been in all of these Daniel Craig movies. Felix has a case that he needs Bond’s help with, despite the fact that Bond has long since been retired. A scientist has been kidnapped who was working on a nanobite experiment where these nanobites can be coded to a specific person’s DNA so that if lots of people are in a room, the nanobite’s can target just that one person. The way they target that person is through a gas that is spread through the air. And it only affects one person, or however many people it is programmed to target. The whole thing sounds very much like Kingsman’s mind control or some other ridiculous futuristic evil science plot idea. None of it sounds very realistic, but it does lead to some pretty cool scenes.

One of these has Bond go to Cuba where he teams up with Anna De Armas’ spy and together they raid a Spectre party. The party has some weird touches going on, including waiters who carry a pillow around with a bionic eye sitting on top of it. The eye is connected to Blofeld’s own bionic eye in his head, as Blofeld himself sits in a prison cell far away. This is another very bizarre idea, that almost doesn’t feel right in a Daniel Craig Bond movie because of how silly it is. Most Craig Bond films and ideas have been pretty serious. And yet, despite how ridiculous it is, the moment still works. In fact, most of these creative, yet bizarre scenes work. The nanobites material is very far fetched, but it still makes for a cool moment when all Spectre members in the room start dropping dead.

From there, Bond goes to visit Blofeld (Christoph Waltz,) in his prison cell, and due to some of that nanobite chemical which gets onto Bond’s hand through Madeline Swan, Bond ends up killing Blofeld. And then it’s about trying to find this scientist who was kidnapped. The MI6 team brings Bond in and we meet the woman who has replace him on the team, as the new 007. She an athletic black woman, played by the same actress who played the best friend in Captain Marvel. And here, she does a pretty good job of convincing us that she’s as deadly and ruthless as she seems. There’s also a lot of funny banter mixed throughout the film about who has the title 007, and why.

And then it’s off to the secret island to go after the villain, Safrin. Ramik Malik’s character has some terrible motivation here. If he just wanted to kill Madeline, after what her father did to his family, that would’ve been fine. If he was after Bond, in order to hurt Madeline by taking the one person she loves, that would make sense. But Safrin is actually after everyone. He wants to destroy humanity, for no good reason at all. He doesn’t even explain his motivation, other than a quick throwaway line that he wants the world to be “a little tidier.” This villain’s motivation is all over the place. A personal vendetta against Bond makes a lot of sense. Having him want to destroy the world is a little much.

The secret island lab is also a little too extreme. It’s very much like the end of the Incredibles and again is more Kingsman than it is Daniel Craig Bond movie. Still, it leads to the best action moment since that opening parcor scene in Casino Royale. This action moment has Bond in a stairwell shooting it out with bad guys, and the camera follows right behind Bond, tracking him at all times, just like in the World War I movie 1917. The tracking works wonders for the moment, especially in this stairwell setting. At one point, Bond even gets down on the ground and ducks behind a body, and we are right there, with him. Aside from that, the movie has a pretty cool conclusive ending that raps up the Craig Bond films. Still between the weak villain and weaker even moitivation, this one definitely has its flaws.