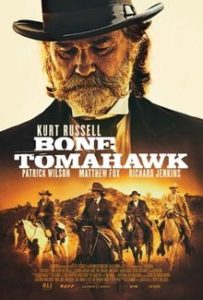 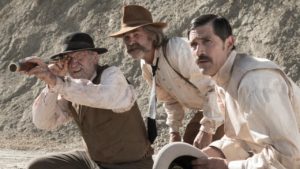 An entertaining movie that is all build up and luckily does deliver in its climactic ending.

A very unusual movie, this one has great dialogue and interesting characters, but boy does it take a while to get to the excitement. It’s about a posse that goes out into the desert in search of a tribe of cannibals who kidnapped members of their town. The movie does a nice job of establishing characters and relationships in the town, in the first part of the story, but once they get out into the desert, things slow down quite a bit. Everything here is a build up to the final showdown, but a little more excitement throughout the course of the film would have gone a long way.

Bone Tomahawk is a strange movie. For one thing, it’s by a first time filmmaker, yet the movie does everything imaginable to not play it safe or be like other movies. And that’s understandable, in the sense that the way to make a name for yourself is by being original and creative, and giving the world something it hasn’t seen before. But with this movie, it really goes to town with doing things that will turn so people off, and doesn’t seem to think twice about any of them. The movie features dialogue that is generally smart and unique, a story takes its time to develop characters, and a final act takes what has so far been a pretty tame movie, and turns everything into a burst of outrageous horror. As a fan of the horror genre, and someone who never, ever has a problem with anything, this movie actually had me covering my eyes. It was only once, for one quick moment, but still, that says something.

The movie is about a posse of four men that goes out into the desert, searching for a tribe of cannibals who kidnapped a number of the citizens from their town. Before we get to that, however, the movie takes its time developing both the characters and the situation. First, we open on two killers, who are going through the pockets of the people they have just murdered. These two men talk about things like how people always wet themselves right before they die, and the number of arteries there are in a person’s neck. It’s interesting without being very intelligent. And maybe that’s the point. The writing is good, but these guys just aren’t very bright. Which might be why they don’t realize they are standing on an ancient Indian burial ground, until one of them receives an arrow through the chest, and the other goes running off.

Now we come to the nearby town. A well-dressed man, named Brooder, (Matthew Fox,) walks into the bar and  notices the piano player, either drunk, asleep, or both. He wakes the man up and questions the sign on the piano, which charges more money per song as the amount of songs selected goes up. “Shouldn’t it be the opposite?” Asks Brooder, as an incentive to buy more songs? The piano player explains the reasoning as the more songs he plays, the more tired he gets. This is definitely the kind of writing we would expect to hear in a Tarantino movie, with a character explaining something unique about his craft, and why he does things a certain way. It’s also the kind of dialogue you would not expect to find in a movie like this. Based on the general content of what is known about this movie before actually watching it, (a posse going after a tribe of cannibals,) one expects this film to be more action based. It’s not. It is mostly character based, and with that in mind, the extra attention to dialogue definitely helps.

Pretty soon the murderer, Purvis (David Arquette,) who got away, in the opening scene, stumbles into the bar. Then in comes the sheriff,  Sheriff Hunt (Kurt Russell.) Hunt starts questioning the stranger, until his backup arrives on the scene, and once they happens its guns drawn and this man, Purvis, quickly being taken off to a cell. They might not be sure of who he is, or what he’s done, but they’re pretty sure it’s something worth looking into. Meanwhile, away from all this excitement, we get a quiet bedroom scene with Arthur (Patrick Wilson,) and his wife, Samantha. She is a doctors assistant and he is the local foreman, now injured and laying in bed with a broken foot. Apparently he went up on a roof to check something out, despite his wife’s pleading against it, and fell off, injuring himself. These two are clearly pretty in love and talk about the kinds of things that tell us how lucky they both think they are.

Arthur’s wife is called to the jail to tend to the injured prisoner. The local doctor is too drunk to do it himself, and so the doctors assistant has to come in his place. And that night, instead of coming back to her husband, it’s the sheriff and his men, coming to tell Arthur why his wife never came home. A tribe of savages broke into the prison and kidnapped everyone who was there. This included Purvis, Arthur’s wife, and the local deputy who was on duty. The first mistake the movie makes is not showing us this break in scene. Consider that a good action movie needs at least three action scenes, interspersed throughout the film. Well, this movie only has one, at the end. It is most certainly not an action movie, but it could have easily been more exciting. Understandably the reason for not showing us the savages until the end is to keep the mystery of them growing through the film, but there are ways that could have accomplished both of these things. For example, we could have seen the break in and kidnapping, but only see the savages in the shadows or to a minimum effect.

So now it’s time to get the group together that will form a posse and head out after this savage tribe. There’s Sheriff Hunt, Broder, Arthur, and the local doctor, Chicory, (Richard Jenkins, almost unrecognizable in terms of the voice he’s doing here.) Consider that two of these men are here only because they feel guilty that the woman got kidnapped. Broder came to get her at the house and bring her to the jail that night, and Chicory is the doctor who she went to the jail in place of, because he was too drunk. Also consider that three of the four of these men are there just for her. Arthur, of course, is the third. These are hardly the best guys for the job. Especially with Arthur’s injured foot.

Still they head off and the journey begins. It’s slow moving for a while. The characters wander through the dessert until they need to stop and sleep. Then they are attacked. The same thing happens the next day, and they are attacked again. Not by the savages, but just by people out in the west, who are passing through. This movie had a promising beginning, but during the mid-section it definitely slows down a little too much for its own good. If the characters were able to put together clues in order to find the sacred ground of the savages, it would have been more exciting. Instead, the mid-section feels tiring and uneventful.

And then we come upon the cave of the savages, high up in a mountain. The movie wisely spends some time both below the cave, on solid ground beside the mountain, and then of course, in the cave itself. And boy are these savages terrifying. Between their white skin color, bone mouthpieces in their necks, shrill screaming call, and inability to speak any clear language, these guys are pretty menacing and monstrous. And they are all about harming our guys. They attack and continue to attack, and as much as we’ve been rooting for our posse and crossing our fingers, it seems pretty clear that they don’t stand much of a chance.

And that brings us to the cave. The savages lock our heroes in cells made of wooden logs that they hammer into place. And we get to witness firsthand what they do to these people, when they are good and ready. This is the scene that is a hand over the eyes moment. Without giving too much away, let’s just say that a character is stripped of all of his clothing, and that makes it even worse, because it means the viewer can see everything. Every little thing that they do to him. And boy is it horrifying. Luckily, this is the only real moment like this in the movie, because it single-handedly takes things to a different level, and not a very good one. Let’s put it this way… this is the moment that has all other horror movies beat, only in the worst and most graphic of ways.

Luckily there is some promise by the end of the movie. And that makes a difference, because if this one had ended on a downer there would be few who walked away enjoying the film. There’s only so much a person can take. But the movie pulls off a solid ending, (unbelievable as it might be.) And overall, it was a pretty solid and unique piece of entertainment. Where else have we seen a movie about a tribe of cannibals terrorizing people in the old west. Talk about a niche. The dialogue really moves this thing along, and the characters are all likable enough to want to be out on the road with. If only that road journey were a little more fulfilling. The climax and final act does give us everything we want, (and then some,) but it’s the mid portions of this film that don’t quite measure up.