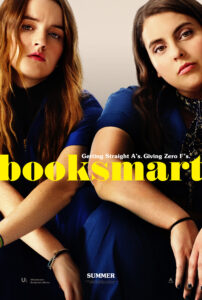 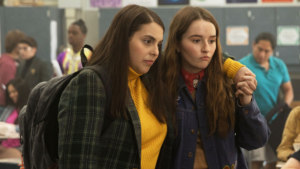 A fun movie about the last night of high school graduation party, we’ve seen this sort of thing before, but this movie manages to find a new approach, making the adventure of two girls having to find the location of the party into the journey.

It’s Can’t Hardly Wait meets Superbad, and this movie fits right along with those other gems as a pretty solid comedy. What we have here is a fun movie about two girls who are best friends and have always been book worms. They don’t care that their classmates consider them nerds until they find out that their classmates are going to colleges just as good as the ones they are going to. Suddenly the night of adventure is on. These two are out to prove that they can party as hard as anyone else. For most of the way through, this leads to some very funny scenes and ideas. But the movie does lose momentum in its final act with a few too many plot points that either take away from the story or just don’t feel right.

Booksmart is a solid movie. It’s a last night of high school, big house party to end the year movie. We’ve seen the type before. Can’t Hardly Wait did it in the nineties. Then Superbad did it in 2007, nearly a decade later. Now, in 2019, we have this decades version of the movie. It’s funny how we keep getting them about once a decade. But what’s even more funny is that they are all good. Three for three. All filled with some pretty smart comedy. Superbad, in particular, is an absolute comedic gem. Can’t Hardly Wait is the one that feels dated (it is, after all, the oldest.) That movie exists in a time before cell phones and the internet, but even more than that, the movie doesn’t go far enough. The teenagers are more interested in dating than in sex, for example. Booksmart goes the exact opposite route. It’s definitely the version for this decade, told from somewhat of a feminist point of view, about girl power and friendship. And for the most part, it works.

The movie is about Amy and Molly, (Beanie Feldstein, the sister of Jonah Hill,) two best friends who have been nerds throughout highschool. Only nerds today aren’t what they used to be two decades ago. The Saved By the Bell / Steve Urkell / Can’t Hardly Wait – Charlie Korsmo character version of nerds is a totally new thing. In today’s high schools, based on movies like this and 21 Jump Street, as well as others, there isn’t as much division between the different social groups of kids. The popular kids are into the nerds and the nerds are into the popular kids. And there’s nothing wrong with that.

Even still, this movie does play the nerd angle as far as it can, having our two protagonists be friends with the teacher and excited about scoring her phone number in one of the opening scenes. The other kids in their class do mostly laugh at them. But these two girls don’t care. They have never cared what other people thought of them before, and are not about to start now. Or are they? Everything changes for them when Molly goes to the bathroom (which is for some reason unisex,) and hears some kids talking about her, and how much of a nerd she is. Not that this really bothers her. What does get to her, however, is when she asks them all what colleges they are going to next year and the answers that come back are all Ivy League schools. It doesn’t occur to Molly that these kids might be messing with her, or maybe it does, and so she goes into the hallway and starts asking whoever she can find, where they are going. And the answers that come back are the same. All Ivy League.

The reason this bothers Molly is because she and Amy have been working their butts off throughout the entirety of their time in high school, never going to a single party or cutting loose even a little. And they have done it just to get into the best schools possible. Which they have. But now they find out that the other kids, who were indeed partying and out there having fun, have gotten into the same schools. It makes Molly and Amy feel like all of their hard work was for nothing. I like how this one girl, Triple A (because of a story where she gave a guy “roadside assistance,”) tells it, “we do care about school, we just don’t ONLY care about school.” In other words, these kids were working hard too, just not quite as hard as Molly and Amy. But it’s not like they are burnouts and druggies or something.

So now Molly is freaking out, because she feels like she missed out on all of the fun that high school could have been. Luckily, however, she and Amy still have a chance. Tomorrow is graduation, but tonight is the biggest party of the year. I’m not sure that would make sense, (who wants to be hung over at graduation?) but then again, I believe Can’t Hardly Wait did the same thing, so who knows. Either way, this movie is all about the one night party, and getting to it. In that regard, and also the two character friendship story, this is very much like Superbad. That movie was also all about the journey to get to this one party, where both characters had crushes on girls who were going to be there. The same thing is going on here.

This story of the crushes they have is mostly about Amy. She’s is out of the closet, and has a major crush on a female skateboarder. Early on, Amy approaches that girl and makes awkward small talk with her, (again, very similar to Superbad, with Evan and Becca by the lockers.) In the case of Molly, however, she doesn’t realize she’s into a guy until we are more than halfway through the film. But we are smart enough to figure it out. Movies generally go the same way, with the characters who hate each other at the start, falling in love by the end. Luckily, this film has a few curveballs as far as who ends up together at the end. But for a while it certainly feels like it is headed into cliched territory, as far the hookups go.

The movie does a great job of presenting a variety of different high school characters, and giving each one of them a unique personality. We get the Triple A character, or the semi-burnout long haired guy who is not going to college (he has a job lined up at Google instead,) and has a crush on the teacher – in what turns out to be a Stifler’s mom like scene at the party. We get the characters who laugh at Molly and Amy, not so much to be mean, but more like because Molly and Amy are a little ridiculous. And we get all of the strange classmates that they come across, including Jared (a wealthy kid who isn’t embarrassed by how crazy his ideas are,) his girlfriend Gigi, (Billie Lourd as an out of control crazy girl,) or the drama kids who take their plays way too seriously.

The fun here comes from a number of places. It’s the way these two girls interact with each other, complementing each other every chance they can get, and telling stories to each other. It’s the way that Amy’s parents (played by Lisa Kudrow and Will Forte,) think the girls are in a lesbian relationship, and that Molly is totally fine with that because it makes them seem more like rebels – they got fake IDs to use college libraries. It’s also the way that the night of trying to find this party leads the girls from one strange destination to another. And all of those strange destinations turn out to be other parties that other classmates are throwing. There is Jared’s party on a boat with nobody there, other than Gigi, and then there is the party at the drama students’ house, which is a murder mystery. All of this is a lot of fun.

But the movie does run into some problems during its final act. First, Molly and Amy show up to the party and are embraced by everyone, especially the kid who is throwing the party, (the coolest guy in the school.) It’s one thing for him to be nice, but another for him to be like “I’ve always had a thing for you.”) And he’s not the only one. Other characters say things like “I’ve always wanted to see you out.” But this niceness is just scratching the tip of the iceberg. Another problem here is that every other student from the movie is at the party. Which means that the kids who were at other locations they went to are also at the party. So Jared, Gigi, and the drama kids. Now, understandably they came to this party after their parties were over, but it just takes away a little from everything the girls have been through during the night to know that all of these characters ended up in the same place. Like they could have just stayed at the drama party, for example, and found this cool party by hanging out with those kids until they were ready to leave. And they probably would have gotten to the cool party at the same time. But the biggest problem has to do with what happens to Amy. Without giving anything away, let’s just say that where she winds up at the end of the night takes things way too far.

Booksmart may lost it a little bit by the end, but for most of the way through, this is a pretty good movie. The characters are funny. The story might be familiar, but the different locations they go to and situations they find themselves in, in order to get to the party, are pretty great. There’s one part, for example, where the girls try to hold up a pizza man just to find out the address of where he delivered a whole bunch of pizzas And this does not go the way the girls have planned it. The situation here, about these girls trying to take this last night to prove themselves, after learning where their classmates got into college, is also a clever take on the last night of high school big house party story. Sure, we’ve seen similar movies before, but each one is fun in it’s own way and finds some new territory to explore. And considering a movie in this sub-genre really comes along only once a decade, and they are all pretty good, this one is another winner to add to the list.