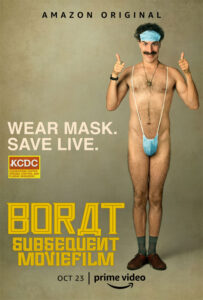 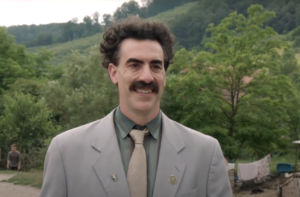 The one joke gimmick that worked in the first movie doesn’t work this second time around, and maybe that’s because audiences are at a different place now with comedy, or maybe it’s just not as smart and not as funny.

Here’s a movie that exists simply because the political climate in America was ripe for making fun of, and they wanted to get this one done before that climate had passed. The movie has Borat come to America (again,) and this time try to get close to figures in President Donald Trump’s organization. First it’s Mike Pence and then it’s Rudy Guiliani. But those moments actually make up only tiny parts of the movie. The real story here is about Borat and his daughter, and all of the preconceived notions Borat has about not only his daughter, but women in general. All that is fine, so long as the humor works. In this movie, it doesn’t. Borat tries to do his usual thing, which is acting in extreme and crazy ways that make people (who don’t know he’s an actor and that this is all fake,) very uncomfortable. Only here, we don’t get those reactions from the people involved. Most of them would rather just ignore Borat and pretend he’s not there. It makes for a pretty uneventful and unfunny film.

Borat 2: Subsequent Movie Film is not a very funny movie. And that really is the be all and end all with a movie like this. Borat, after all, is really just another version of the Punk’d reality show – catch you on camera when you don’t know you’re being recorded or know that what is happening is fake, kind of situation. It’s the same thing that actor Sacha Baron Cohen has been doing his entire career. Cohen got his start with the HBO show “The Ali G Show,” where he interviewed industry experts by often asking them ridiculous questions and managing to convince them that he was actually serious. It worked for that show. It even worked for the first Borat movie. But for this sequel, it just feels old and tired, and not very eventful or fresh.

The movie tries to make things appear fresh by disguising its story with the backdrop of the 2020 Presidential Election. Specifically it focusses on the Trump Presidential campaign. Both Mike Pence and Rudy Gulliani are actually in the movie, (unknowingly.) And you would think this idea of grounding the story in the midst of American political landscape would work. After all politics and the tension between the two sides is more volatile and compelling now than it’s been in ages. But once again, it’s the comedy that really counts in a movie like this, and having a great backdrop can only go so far. At the end of the day, if the jokes aren’t funny, the movie just won’t stick the landing. At all.

So why aren’t the jokes funny? There are two reasons really. The first is that humor has come a long way since the first movie. Borat came out in 2006. That’s fourteen years ago. Since then, reality shows have become the new normal. And that means plenty of prank shows. A good example would be the True TV show “Impractical Jokers.” That’s a show where guys come up with elaborate pranks to pull on people and then get their friends to execute them, all while the guys are behind the scenes feeding their friends the lines. The pranks on that show make Borat’s interviews seem pretty tame.

The second reason why the jokes don’t work here, in the Borat sequel, is because they are pretty much all the same. Borat or his daughter says or does something kind of crazy and everyone just stands around and watches. They don’t say anything. And if they do say something, it’s ignoring what just happened and then continuing on with their conversation. That’s not what we want. That’s not what makes these kinds of shows funny.  People having no reaction is the exact opposite to what we are looking for. We want to see the reaction and we want it to be big.

The running joke in this movie apparently is that Americans are incredibly stupid and racist and will let you get away with anything, if it means not having to confront you or call you out on it. There are some scenes that are more memorable than others, like one where Borat and his daughter go to see a fertility doctor to ask for an abortion. The doctor is a religious nut and all he cares about is that these two people don’t get the abortion. He doesn’t care at all about the idea that Borat is the girl’s father and is insisting that he is the one who knocked up his own daughter. Borat tries to tell the doctor this in every way, and the doctor goes from ignoring it to just telling Borat that he doesn’t want to hear it. And that’s about the most extreme reaction anyone has during the course of this movie. A person basically saying, “I’m ignoring you.” That’s it.

There is one person here who does call Borat out on things, but she doesn’t do it to his face. That would be the “babysitter,” an older black woman who is watching his daughter while Borat goes out for the night. Borat’s daughter explains to the babysitter all of the things her father has been telling her, and that she has come to believe. For a while, the babysitter listens. But then eventually she tells Borat’a daughter that her father is wrong. Then at the end of the movie, there is a talk with her and Borat about all of this. But none of it seems very confrontational. None of it is extreme. And yet it is the closest thing that we get to someone actually recognizing that what Borat is doing and saying is actually wrong.

One would hope that if the humor didn’t work, at least maybe the plot would be decent. But it really doesn’t have a whole lot going on. Borat caused is country lots of shame after the first movie, and has been an outcast from the country ever since. But now, fourteen years later, the president has come up with a way for Borat to redeem himself. He wants Borat to bring a monkey to Vice President Mike Pence as a present. So Borat travels to America with the monkey and his daughter. Only when he gets there and opens the box that they were both in, he finds that his daughter has eaten the monkey.

At this point, Borat is in America, with no ideas, having failed at his mission. Then he gets the idea to offer his daughter up to Mike Pence. When that doesn’t work he gets the idea to offer her up to Rudy Guiliani. And that’s pretty much the extent of the plot. It’s so basic, that it’s like someone drew three point on a piece of paper and told a writer to just connect them. It didn’t matter if there was logic connecting them, or anything that made sense in between, or not. And sure, there’s a lesson learned at the end, as Borat finds out that women can do things just like men, but it’s about the only real plot point in the entire movie. And it feels and seems pretty basic.

Aside from extreme reactions not being in this movie, the way they probably should be, the funny interviews that Borat did in the first film are also missing. The movie tells us the reason is because people now know who Borat is, so he can’t interview someone pretending to be a nobody, when they immediately recognize him. But even still, we feel the loss of those interviews. Maybe Borat could have just worn a  disguise. And on top of those things, what’s also missing are some scenes from the trailer, like one where Borat’s daughter is made to sit in a chair strapped to the top of his car while he drives, until they are stopped by the police Most movies have scenes cut out that were in the trailer, but this one feels like a big loss. Like it would have been one of the funnier moments in the movie. And it’s nowhere to be found.

Borat 2: Subsequent Movie Film isn’t funny or smart or anything that really works at all. There are a lot of problems here, and one is definitely that they took too long to make this sequel. Plenty that are made decades later as a rule generally don’t work. It’s like comparing the original three Die Hard movies or Indiana Jones movies to the much later follow ups. Borat 2 isn’t about taking a classic, the way those other examples did, but it does continue the idea that if you wait too long, the sequel probably won’t be very good. A main reason is because times have changed by the time the sequel comes out. In the case of Borat, so has humor. The movie is really not much more than a waste of time.