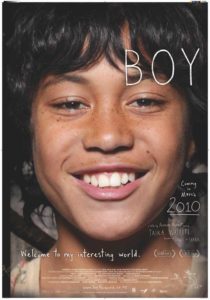 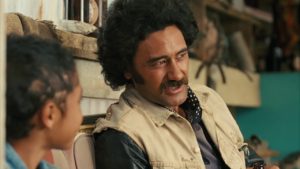 A funny little movie, this one is about a boy growing up in New Zealand with a bunch of kids and no adult supervision, until his dad shows up, and ends up being the least adult of them all.

A pretty interesting movie about a boy who is put in charge of taking care of his younger brother, Rocky, for a few days, living a life with little to no adult supervision, when suddenly his long lost father rolls back into town. This man, Alamein, has recently gotten out of prison, and has returned to find the money he hid before being incarcerated. The story is about his relationship with Boy. It ends up being a mix between comedy and drama, with Alamein being a terrible father, and Boy slowly figuring that out.

Boy is a movie by New Zealand director Taika Watiti. This is a filmmaker who has become pretty huge in the past five years. He rose to stardom with the movie What We Do In The Shadows, a vampire mocumentary about a group of three vampire flatmates who deal with regular human problems, (such as dirty dishes in the sink,) from a vampire perspective. After that, he made Hunt For the Wilderpeople, which was funny, but not quite on the same level as Shadows. And then he went to work for Marvel, and made Thor: Ragnorak, one of the more light-hearted, funny, and campy Marvel films. But Taika got his start with movies like Boy (and also another film called Eagle vs Shark.) Boy is by far his most independent and low budget film, and it’s pretty impressive what this guy was able to do with such limited resources at his disposal.

The movie is about an 11 year old, named Alamein, (although everyone calls him Boy,) who is put in charge of taking care of younger children for about a week, when his long lost father comes to town. The way it all works is that boy and these children live on a farm in New Zealand, with their grandmother. Boy’s younger brother is Rocky, and he looks up to Boy for advice and inspiration. When their grandmother leaves town for a few days to go to a funeral, Boy takes over with cooking and caring for the others. That’s when his father shows up.

The movie is really about Boy’s relationship with his father and reuniting with the man during the course of the week. Before we get to that, however, we are introduced to Boy in his daily life. He’a a huge Michael Jackson fan (the movie takes place in 1984,) and Boy practices and shows others his Michael Jackson dance moves. He has a crush on a girl named Chardonay, and hangs out with his friends, (one boy who always walks around shirtless, and painted blue,) telling stories  about their supposed sexual conquests. In the friends case, he says he tells girl he is allergic to undies, so that when they want him to go away, they just show him their undies. It’s so stupid that it’s funny.

Boy has some encounters with bullies who make fun of his dad. First, there’s a boy in school who tells Boy that his dad is a degenerate, locked up in prison somewhere for robbery. Boy attacks this kid and gets kicked out of class. Then, after school, the kid’s olde brother comes and threatens Boy not to ever go near his younger brother again. And this is the basic life we have been brought into, before the father appears and the real story of the film begins. It’s Boy, his brother, their friends, the girl he likes, and the bullies.

And then one day, the father, Alamein, shows up. He arrives with two goons who are his friends, and also members of his gang, the Crazy Horses. The three of them show up one night, in a car, sitting three across the front seat, which is a pretty funny image. Boy can’t believe his father has finally come back home. The timing of this, taking place right when his grandmother has gone away, is very much the timing in Napolean Dynamite. The grandmother goes away for a few days and suddenly the unusual uncle shows up. It might be pretty convenient, but it ends up making for a decent story.

Here, Boy quickly learns that his father hasn’t come home to take care of him, but to look for some money that he hid away before getting arrested. Alamein buried the money in a field, and he and his friends spend each day digging up various parts of the field, hoping to find it. They have no success. And Boy doesn’t mind at all that this is the real reason his father came back. He has been without a father for so long, that he’s just happy to have one again, and is willing to overlook quite a lot, including the fact that his father doesn’t even want to be called dad, but asks to be called Shogun, instead.

Alimein doesn’t talk about Boy’s mother at all, who died while giving birth to Rocky. And he’s not much of a father either. His advice about women, when Boy tells him about a girl he likes is “do what you want. Just don’t get her pregnant.” This leads to Boy to be way too sexual with Chardonnay while sitting in a car with her one day, to the point of being innapropriate, and making her want nothing to do with him.

At one point, to impress his father, Boy goes looking for the money himself. He digs up the field while his father is away and actually finds it. At that point Boy hides the money in the pen for his goat, and gets excited about showing his father what he found. He starts wearing Alimein’s jacket, and buying ice pops for all of his friends. When Alemein shows up, before Boy even has a chance to tell the man about his discovery, his father hits him for wearing his jacket. At that point, Boy starts to have second thoughts about giving his father the money.

By the time Alamein comes and apologizes, it’s too late. Boy goes to get the money only to find out that the goat has eaten all of it. And at that point, he’s starting to realize that his father isn’t such a great guy, anyway. Boy tells his father about the marijuana plants that his friend’s father grows and Alamein and his gang go and steal it. Then they are confronted by another gang, (the one where the man they stole from is a part of,) and get into a fight. Alamein and his boys are beat up, to the point where they leave him and want nothing to do with him anymore. And Boy soon follows.

By the end of the movie, he is taking a stand against his father and even physically attacks him. This ending seems a little forced bases on the need for a climax, (Alamein doesn’t seem like the kind of character who would just let a boy beat on him,) but here he does. Maybe it’s because he knows he was wrong and feels terrible about being left by everybody at this point. The movie ends with Boy and Rocky going away, and thinking their father went to Japan. Then they reunite with him for the final scene to ask him how his trip was. It’s a strange ending to an otherwise pretty smart movie. This one was equal parts comedy and drama. The underlying story is all drama, of course, but in the hands of Taika Watiti, the comedy element runs throughout nearly every scene.