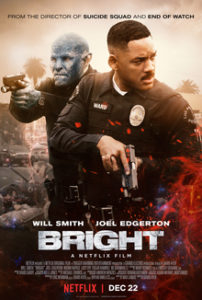 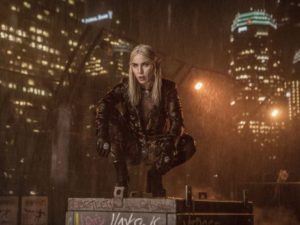 There are some definite cool things about this movie, but too much of it feels like a standard buddy cop movie, whereas it should have embraced the fantasy elements more and given us something even more creative.

What a great concept on hand here. A fantasy movie set in the urban gritty life of being a police officer on the streets. Two cops are partners, assigned to each other, and couldn’t dislike each other anymore. No, it’s not Lethal Weapon. This time, one of the cops is a human and the other one is an orc. Society is filled with fantasy creatures. Only not as many as you might think. There are humans, orcs, and elves (fairies get the minimal treatment here.) But instead of embracing these creatures and turning into a real fantasy, this movie becomes a pretty ordinary police drama with the characters just looking a little different. Both orcs and elves are symbolic representations of social classes, and if the movie beat you over the head anymore with the metaphors about society, this would be a Neil Blomkamp film, (District 9, Elysium.) While the overall idea behind Bright is great, the movie itself is just okay. It doesn’t embrace the crazy and the out there nearly as much as it should have. And despite the cool fantasy elements, it still often feels a little too familiar.

Bright is a movie that really wasn’t bad, but it also wasn’t nearly as cool or creative as it should have been. This movie is an important film for a lot of reasons. First off, it’s the first big budget Netflix movie. It’s the first real Netflix action movie. And it’s the kind of movie that apparently studios don’t make anymore. These days, if the studios are going to commit to a big action movie, than there has to be a built in audience already waiting at the door step. That means it has to be either a comic book movie, a video game-based movie, a sequel to something, or in some way connected to a series that audiences are already familiar with, (such as a remake.) But it can’t be something completely original and out of nowhere, and also get the green light for a large budget, the same way this movie did. So if we’re ever going to see fantasy by a studio, it has to be based on an already existing property, (like Lord of the Rings or King Arthur.) And that’s why the movie was brought to Netflix by writer Max Landis and director David Ayer. Because the studios wouldn’t touch it.

Now that’s a real shame, considering how cool the concept is. This is a gritty cop drama set in fantasy times. The world looks pretty much the same as it does today, except for many of the creatures who roam it. Instead of just humans, we now have orcs, elves, and fairies. The fairies are barely in the movie, and are really more like insects, (there’s just one main appearance by a fairy, at the start of the film, being killed like a fly.) But the orcs and elves are prominent, and the movie is really about the clash of these types of characters with each other. The plot may be kind of routine, for a cop movie, but having the different creatures in it makes this something we really haven’t seen before.

Or have we? You see, the creatures and characters are pretty clearly meant to be symbolic representations of the types of people and social classes we currently have in our society today.  Each type of creature really represents a different level of society. The humans are the average, blue collar workers. They’re represented by Will Smith’s cop, Daryl Ward. The elves are the wealthy, elitist group. They live in fancy cities, dress in suits, and seem to be above everyone else. And the orcs are the lowest income class. These are the character who live in the hood or the projects and resort to gang violence and crime. The movie is all about racism. It’s about one orc, Nick Jacoby (Joel Edgerton,) who is on the police force and has to deal with all kinds of discrimination, simply because of the race or group he belongs to.

Only that’s really just scratching the surface of what this film is about. The racism is just part of the setup. The human cops don’t like Jacoby simply because he’s an orc, and they want Ward to do something to make Jacoby go away. That means first they want Ward to make up a lie about Jacoby and report it to the senior officer, to get Jacoby kicked off the force. And later on, when the stakes get raised,, they actually want Ward to kill Jacoby. Now all of this is pretty interesting. So is the idea that the Internal Affairs division of the police unit approaches Ward with a story about how they believe Jacoby let an orc who shot Ward get away, simply because he was an orc.

But again, all of this is just the first part of the film. And maybe that’s the problem. The movie tries to do too much. Instead of running with this story, about a cop caught between doing what he knows is right, (being a good partner to this guy who has never done anything wrong,) and going along with what everyone else wants him to do, this movie becomes something else entirely. It becomes about a magic wand. In other words, it turns into a simple mission movie. On that note, it  wants to exist in a world of creatures and racism and different classes, but then It wants to give us this fantastical plot about pursuing this sacred and valuable item. The wand, of course, is a Macguffin. Consider it the same as a movie without the fantasy creatures, where two characters find a bag full of money, and now everyone is after them. So, without the different creatures of fantasy lore, this thing is actually pretty simple. And therein lies the problem.

It’s nice to see a fantasy movie with creatures like this. And it’s even cooler to see them taken out of their usual element of kingdoms and battlefields. But the problem is, this movie throws them into a very ordinary plot. Considering that this storyline could easily not have the fantasy creatures, and simply be about two cops who found something of value, at the end of the day, we really have the same old thing dressed up in different wrapping paper. And just to make sure they hit every cliche, the guys aren’t just protecting the wand. They’re also protecting a female elf, who has escaped the bad elves. So the bad elves are after this woman and also after the wand. That means the cops are not only protecting the item, but also protecting the “witness” who everyone is trying to kill. It all feels very familiar.

Maybe that’s because this movies director, David Ayer, has made a career for himself by writing and directing police dramas, to the point where he really doesn’t know much else. Ayer wrote Training Day and Dark Blue. Then he directed End of Watch and Street Kings. He’s basically the go to guy, when it comes to cop movies, (with Shane Black being the other one.) Only unlike Black, who keeps looking to branch out with what he does in the genre, Ayer is perfectly content with doing the same old thing. Sure, there are slight variations. He directed Fury, which is basically a version of a team of cops in a tank, and Suicide Squad, which is a version of a team of cops going into town to stop a bunch of criminals. But when the plot points start feeling identical, in different movies, despite the genre or setting change, you know there’s a problem.

Case in point, during one pivotal scene of the movie, a main character is about to be shot down by a gangster when suddenly the gangster’s son announces, “wait a minute, this is the cop who saved me earlier on in the film.” This plot point is directly out of Training Day, with Ethan Hawke in the bathtub as a bunch of angry Latinos hold a shotgun in his mouth. That’s the moment when Hawke’s character makes the connection between these guys who are about to kill him, and the girl he rescued from being raped earlier on in the film. Now, since it’s really just Ayer wrapping off himself, (since he wrote Training Day,) it’s not as bad, but even still, this guy needs to get some new material.

Someone should have also told him, (or the screenwriter,) that a general rule of movies is that if you talk about something having amazing powers or being able to do something incredible, you better be prepared to show us that later on in the film. In the John Wick movies, for example, there’s this legend about John Wick killing guys with a pencil. And he keeps getting asked about it. So in the second movie, we see him actually do it. But here, in Bright, there’s talk about what the magic wand can do, “if you want to be taller or shorter. If you want ten million dollars.” In other words, it sounds like a genie’s lamp. Only we never see any of that. We see it used for fantastical things, like brining someone back to life, but never for these sort of “wishing” materialistic things.

The best thing about this movie, by far and away, is the relationship between Ward and Jacoby. As played by Joel Edgerton, (under a ton off makeup, to the point where he is unrecognizable,) the Jacoby character is pretty compelling. And he and Ward have some really great conversations here. Some of them are bickering, while others are about putting the situation of their society into perspective. The arguing between them, and hating on each other goes all the way back to something like Lethal Weapon. And it definitely works here. What doesn’t work is the story about the bad elves who are after the wand. They’re lead by Naomi Rapace, as the queen of her order, and we really don’t get much personality from her. But that’s okay, because this is the best and most creative thing Will Smith has done in years, and it’s nice to see him out there, taking changes again.