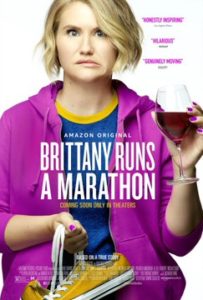 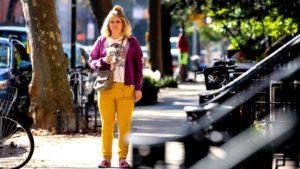 A movie that works on multiple levels including being both funny and dramatic, this one doesn’t takes some careful watching to really get, and is certainly not a guilty pleasure movie, but it’s surprisingly pretty good.

This movie happens to be pretty entertaining. On the surface it looks like a simple romantic comedy about a girl trying to lose weight and get her life together, but it’s actually a whole lot more. This is the movie of a girl with some major issues, including the way she dealt with relationships… not just romantic ones. The movie is part comedy and part drama and that formula works out nicely, because when the comedy parts aren’t working, the dramatic story elements make up for it. There’s a lot going on here, as Brittany spends about a year going through some huge ups and downs. And seeing the way she handles different situations and the many characters she comes across in her life, make for a pretty fascinating experience. This is no guilty pleasure film. It’s one to watch and put some real effort into, in order to appreciate.

Brittany Runs A Marathon is surprisingly a pretty good movie. I say surprisingly because nothing about this movie looks very appealing. On the surface, it appears to be a comedy about an out of shape woman getting into shape and eventually running a marathon. We’ve already seen plenty of movies like this, such as Run Fatboy Run, with Simon Pegg and Thandi Newton. So what makes this one special? If anything, it’s cast of barely known actors doesn’t help it much. There are three recognizable faces here, and most of them are the kinds of actors where maybe you can name some things they have been in, but certainly don’t know their names. Those actors are Jillian Bell, Lil Rel Howry, and Michaela Watkins. And while it’s not much of a selling point for the movie, being told that these actors who are barely known are the only “names,” in the movie, the truth is, they all signed up for this project because there was actually a pretty smart script.

The movie is indeed about an overweight girl who gets into shape and runs a marathon, but it’s about a lot more than that too. It’s about an out of control girl who is throwing her life away and doesn’t seem to care. Brittany, (Bell,) is a party animal who hangs out with all of these super attractive friends, because they get to say she is “the funny one.” She’s the girl who never gives them competition. Who they know is a safe bet to take around. But these girls aren’t exactly nice either. Her roommate is the example we get to see the most. Her name is Gretchen, and she is a fit, young Asian girl who parties like there is no tomorrow. She also has makes videos about her life and how fabulous it is, and has tons of followers. She and Brittany go through some major ups and downs during the course of this movie.

After an opening scene at the playhouse where Brittany works, (and where we get to see Brittany being pretty funny to the audience members who have come to see the show – “intermission is just a girl screaming on stage for ten minutes straight,”) we go to the club where she and her friends are hanging out. There is one guy who seems interested in Brittany, but really he just wants her to do him a sexual favor. And Brittany is so down on herself, that she accepts. The next day, she goes to see a doctor. And the doctor tells her to lose weight. Watching her try to trick him into giving her adherol is pretty funny. She pretends not to know the people use it for recreation. But the doctor gets serious with her about her body and need to lose weight, and Brittany walks away giving it some serious thought.

She goes to look at a nearby gym and meets with a trainer there, who takes her on a tour. The trainer, (Mikey Day from Saturday Night Love,) talks to Brittany about equipment and price, and is pretty blunt with her. For example, he tells her that for a certain price, she can use all of the equipment in the gym except for half of it. And Brittany gets on him about the price and how people can just run outside for free. It’s another funny scene. And it leads to Brittany trying to run outside on her own. Which doesn’t go so well. She has to deal with New Yorkers crowing the side walks as she tries to get past them. And her goal becomes to try and run for just one block.

But Brittany gets encouragement from Catherine, (Watkins,) a neighbor who lives in the building, and who hears Brittany crying once, before coming up to check on her. Catherine opened up a little to Brittany that night, telling her that she used to do heroin and has a problem. Brittany thought Catherine’s life was perfect, because she has a lot of money. Turns out Catherine has got real problems of her own, but we’ll get to more of that later. At first, Catherine just tells Brittany about a group she goes running with, and the time and place of the meetup. And Brittany shows up. While running, she meets a guy named Seth, who is almost as out of shape as she is. He tells her about hyperventilating after doing a potato sack race with his son, and how he needs to start doing impressive things around his son, instead of looking like a failure. Seth is gay, so there’s no romantic chemistry there or anything, but he quickly becomes a good friend.

Speaking of romantic chemistry, however, there is romance in this film. For a while, Brittany has a hard time getting a job. She tries to be a nanny, but is not what people are looking for. As one woman tells her, they are looking for someone who will just fade into the background, and Brittany doesn’t seem like she has that kind of personality. But she does find out about a service where people are paid to just go to the houses of people who are out of town, and walk their dogs for them, a number of times a day. So Brittany starts working for this service, and soon she meets the night guy, who during the course of this movie, ends up becoming her love interest.

The night guys’ name is Jerm. He has very different views on life than Brittany does, and is kind of like an alternative version of the character Aziz Ansari played on Parks and Recreation. He’s short and Indian, true, but more than that, this guy is an entrepreneur and is all about life and positivity. He’s the kind of guy that Brittany hates at first. Until she opens up a little and lets him in. And Jerm has something kind of funny going for him. He is living at the home where he walks the dogs. Jerm has discovered that the owners are always out of town, and so he has moved in. He encourages Brittany to date and even helps her with her profile. And of course, they end up falling for each other.

Brittany has other relationships and bonds going for her too. She has a strong one with Demetrius, (Howry,) who is married to Brittany’s sister. Demetrius is supposed to be about ten years older than Brittany, (in actuality, the actors are close to the same age,) because growing up, he was like a father figure to her. As the story goes, her mother left the girls, and her father got sick and died. Brittany’s sister and Demetrius moved in and took care of her. Brittany was nine and Demetrius was 19 when they met, and he must have started taking care of her a few years after that. Apparently raising her was so important to him that he dropped out of college in order to be around to do a better job of it. Demetrius serves as an important character here when Brittany hits a low point and needs a wakeup call in order to get back on her feet. There’a a fantastic scene at a party for Demetrius where Brittany hits her lowest low and embarrass everyone at the party… especially an overweight girl who she continues to make fun of.

The other big relationships come from those Brittany has with the roommate (who is incredibly superficial, and turns out to be a villain of sorts here,) and her running friends, Seth and Catherine. The roommate, Gretchen, resents that Brittany is getting so fit that she won’t party anymore. When she and her boyfriend break up, Gretchen wants to party with Brittany. Maybe that means drinking and drugs. Brittany says no. Maybe it means ice cream. Brittany says no. This causes Gretchen to turn on Brittany and tell her that she will always be a fat girl. The two of them never really recover from that, although the movie forces something in at the end about Brittany moving back into the apartment, without ever making it clear how that happened. Perhaps there’s just too much going on to clear up everything. After all, Brittany has relationships with other characters too. With Seth and Catherine, when Brittany doesn’t make it into the marathon, they try to help her. And that doesn’t go so well either.

The movie is filled with interesting relationships and dynamics, and that’s one of the reasons why it’s pretty entertaining. And that’s the kind of thing that you would never see in the trailer, or know about without actually seeing the movie. It’s understandable that the movie doesn’t have the chance to explain her moving back with her roommate because there is just so much ground to cover here. The movie spans two full years in Brittany’s life. And it chronicles her relationship with Jerm, as well as with many others, in detail. We see how Brittany first realizes that she is falling for him, how she tries to seduce him, and how they end up getting together. And it’s all a lot of fun. This is the kind of movie that takes more than one viewing to really appreciate. On a first viewing it’s about the basics. Does the movie seem especially creative? No. Does it make you laugh all the time? No. But on a second viewing you realize that it’s actually a pretty smart film and that the relationships are incredibly entertaining. They are the single feature that really make this such a memorable and unique movie.