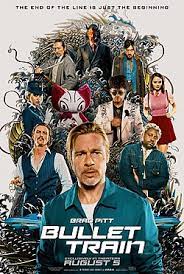 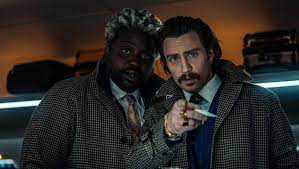 Smoking Aces meets Murder on the Orient Express, crossed with Tarantino meets Guy Ritchie, this one feels incredibly familiar and doesn’t have a whole lot new to offer.

A movie that feels very much like tons of other movies that came before it, this one takes the bunch of assassins all after the same thing premise (Smoking Aces, John Wick,) and moves the location to a train. Now, that could have been cool if we got to know the locations on the train or really got to know the characters. But here, the characters are all played for laughs as they argue back and forth, and the action isn’t anything great. There are some clever little moments from time to time, but for the most part this doesn’t have much new to offer.

The best thing about Bullet Train is the title. It just sounds like the perfect title for an action movie. And the premise, about a train full of assassins, doesn’t sound too bad either. Until you start to think about, and pretty quickly it becomes clear that you’ve seen this movie before. Whether it’s Snowpeircer or Smokin’ Aces or Murder on the Orient Express, this is familiar territory. Now, have we ever seen this exact same plot to a T? No. But Smokin’ Aces was about a hotel full of assassins, or something to that extent, and between that and the John Wick series, the bunch of assassins idea is kind of played out. So here they change it to a train. So what? It’s pretty much a given that the story won’t be all that great. Maybe all of these characters are connected outside of the train somehow, maybe they aren’t. It doesn’t really matter. What matters is the action and the humor and neither of those here, are anything special.

Now let’s talk for a minute about how this movie could have been cool. With this exact premise. If this were a Tarantino movie for example (and there is no world where Tarantino would ever make something that feels this familiar, but hypothetically, if he did want to try his hand at this kind of thing,) then the characters would each be very unique and would be filled with interesting dialogue. In fact, half the movie would be dialogue to the point where they would spend lots of time just sitting down with each other, telling really interesting stories. Think about the Hateful Eight, which took place entirely in cabin, or on the way to the cabin. In this movie, you would get something like four characters sitting in seats next to each other talking, and the real fear that one of them was about to kill the others. Think of the opening scene of Inglorious Basterds, with Hans Landa questioning the farmer inside his house. That kind of thing. Real tension.

But this movie isn’t interested in real characters or tension or stakes at all. It wants to be funny, but doesn’t have much of a clue how to do that. Which is why we get the Twins as the comic relief here, two characters played by Brian Tyree Henry (of Atlanta,) and Aaron Taylor Johnson. Instead of having interesting conversations, they spend the whole movie having the same two conversations over and over again. The first of those is their names. One of them is named Lemmon and the other Tangerine. It seems like maybe these names are temporary and just for this job, and so they argue back and forth about who should have each name and what people think when they hear the names. The whole thing sounds very Reservoir Dogs-esque with the discussion of. code names… in that movie with characters arguing over things like what people think of when they hear the name Mr. Brown. And speaking of Tarantino movies, the two assassins who work together, one white and one black, naturally calls back Pulp Fiction. That one isn’t such a big deal, but combined with all the other similarities to Tarantino movies, including a fractured narrative, it definitely contributes to the feeling that this movie very much wants to be like one of his films.

The other conversation the Twins keep having is about Thomas the Tank Engine. The children’s cartoon. Lemmon (Henry,) keeps talking about how everything he learned about people, he learned from that show. And he talks about how everyone is a variation of one of the characters on that show. So he’ll say like, “you’re a Thomas,” to a character he meets on the train, and something else like that to another character. It’s a little witty and clever, but it also gets old pretty fast. The thing that does make it cool is that he carries around a bunch of stickers, and puts them on people when he figures out what they are. And this helps his twin, who knows his sticker routine, figure out the truth about someone later on, when he notices a sticker on them.

That’s one of the few cool moments of the movie. Another comes when we learn about an assassin who we didn’t even know was on the train. It’s a character played by a recognizable actress, who for the most part was kept out of the advertisements for the film to the point where we didn’t even know she was in it. So that idea was cool as well. But other than those two things, this movie feels all too familiar. And it’s so loaded up with characters and stories (not good ones, but quick stories,) that we stop caring about who’s who and why they are or aren’t important, pretty quickly. To say this movie wants to be like Snatch or Lock, Stock, and Two Smoking Barrels (the two best Guy Ritchie movies,) is simply to quote more of the influences on this one (ironically enough Pitt was in both Lock, Stock and Inglorious Basterds, two movies that were already cited here as being influences on this film.)

And if you’re gonna make this movie, getting Brad Pitt definitely helps. He’s a guy who generally picks good, smart movies, even when the subject matter is familiar. Such was the case with his World War Z, for example, a zombie movie that he helped elevate to being a little smarter and classier than most in the genre. But Pitt’s days of being in generally excellent movies, (other than his outings with Tarantino,) do seem behind him. There are no more Sevens or Twelve Monkeys on his horizon. Even Money Ball, which was a great movie, didn’t feel like Pitt taking all that much of a risk. It was Brad Pitt playing Brad Pitt, with all his witty, zen-like persona qualities. Compare that to someone like Tom Hanks, who pushes himself to the limits as often as he can, (with his most recent film, Elvis, Hanks not only had to don a fat suit and use an accent, but also had to play a conniving villain.) Pitt, on the other hand, doesn’t seem to be trying anything like that, anytime soon. The last strong accent he used was in Snatch, and that movie was over two decades ago.

In this movie, Pitt is playing an assassin who doesn’t want to be an assassin anymore. He’s perfectly content with completing a job only if it’s easy, and not completing it if it makes things easier for others. So in this case the movie is all about getting a brief case (again, {Pulp Fiction,) and when it’s just simply picking it up, Pitt’s character, “Ladybug,” is all about getting it and moving on. But once he learns that other characters on the train want the brief case too, Ladybug offers to just let them have it. That’s the kind of serene, Zen character we have here. Cool, yes. Interesting or compelling, no. It also isn’t very far removed from the character Pitt played in the Ocean’s movies, always eating, never taking anything too seriously.

Here, the first handful of scenes deal with Ladybug talking to his phone handler who arranges jobs for him (played by Sandra Bullock, who mostly exists as just a voice here,) about how unlucky he is. We get a funny flashback to a suicidal bellboy jumping off a building and landing on Ladybug’s car. But other than that, he actually does seem pretty lucky, avoiding death and danger pretty easily. And this lucky vs unlucky talk is why he is given the name Ladybug, since they are supposedly known to be pretty lucky insects. Like the Thomas the Tank Engine stuff or the Lemmon and Tangerine stuff, none of it is very interesting.

One problem with the movie is that it is far too jokey for its own good. The jokes actually take away from the film with character arguing more than they actually seem scary or threatening. In that way, it’s definitely more Guy Ritchie than Tarantino, but even Ritchie’s films feel menacing. You feel that there is weight behind his biggest villains in each movie. Here, it all feels like fluff. Character who the movie told us were dead come back from the dead (turn out to have not been dead at all,) which is always a cheat, even when Marvel movies do it (and they do it quite a lot these days, most recently over and over again in Thor: Love and Thunder.) And the action here really isn’t anything special.

And that brings us to the director, David Leitch. This guy was one of the two former stuntmen who came together to make the John Wick movie and jump start their careers as directors. The other director, Chad Stayelski, stayed with the Wick movies and has shown what a masterful action director he is, again and again, ever since. Leitch, on the other hand, has made a lot of big budget, mainstream crap. From Atomic Blonde to Deadpool 2 to Hobbs and Shaw (the worst of the bunch,) he’s clearly not a great action director. And at this point it’s pretty obvious that Stayelski was the one truly behind the first John Wick film. Even with Leitch’s own production company, 87 North, the best movie with the best action made by that studio was the Bob Odekirk movie, Nobody, which Leitch did not direct. So the action and humor aren’t great, and the story isn’t much better. And yet there are still some fun ideas here, from time to time, like the characters having to get off at stops to meet people on the platform, and then make it back onto the train before it takes off again. But the fun ideas aren’t many, and they are sprinkled throughout the film. For the most part, this movie is very familiar feeling and nothing special at all.