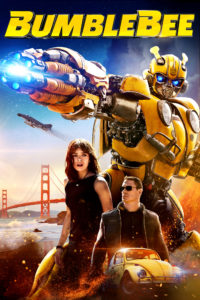 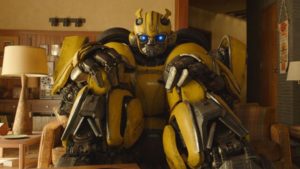 The best Transformers movie in ages, this one is actually kind of smart, at least in its approach to storytelling.

Finally a Transformers movie that is actually worthwhile. It’s not high art or anything like that, but in terms of B movie genre fare, this one is actually pretty good. The reason for the change (after all, there have been about five Transformers movies before this, none of which were very good,) is a change in director. They got Travis Knight for this one, whose Kubo and the Two Strings was an animated masterpiece. This guy has definitely got talent, and with Bumblebee, he’s correcting all the mistakes that director Michael Bay made time and again. This movie focuses on a smaller amount of characters, a smaller setting, and a smaller story. And all of it works. Now this is the way you make a Transformers movie!

Ever since the the end of the very first Transformers movie, the series of films (I’ve lost count, but I think it may be five total, three with Shia Labeof, and two with Mark Wahlberg,) has been a mess. An absolute, awful mess. Director Michael Bay has himself transformed during the course of these films from a talented rising star director who made Bad Boys, The Rock, and Armargeddon, to a giant punchline of a filmmaker. His movies now adays, that are not Transformers films, are nowhere near the ballpark of what he once was able to do, (more recent movies of his include Pain and Gain and 13 Hours. The problem is that the Transformers films kept making lots of money, and so Bay’s ego was pumped up more and more, with nobody willing to step up and tell him how terrible his ideas were. And so, a series which once seemed to have a glint of promise has been run into the ground.

But for the first time, there is a new director behind a Transformers movie. It’s a spinoff movie, actually, about Bumblebee, the lovable fun little robot who works as part of Optimus Prime’s crew. And the director is Travis Knight, a guy who made his bones with stop-motion-animation, and in particular with the movie Kubo and the Two Strings. Now, Kubo is a fantastic film, and showcases not only Knights artistic sensibilities, but also his knack for storytelling. And with Bumblebee, he brings his A game to a genre that is in desperate need of having new life pumped into it. Bumblebee is by no means a fantastic movie, but it’s definitely the best Transformers movie there is, (way better than even the first one,) and shows that in the hands of other filmmakers besides Bay, this series just might have some legs.

Knowing that Bay is over-the-top and too big scale crazy for his own good, and that this movie is out to prove it is different, you would expect it to take everything on a smaller scale. Instead of bring about a whole war of Transformers, for example, this movie is going to be about just one Transformer. And you would expect this movie to open small and build up to the appearance of that Transformer, right? Not so. The movie actually opens with a battle on another planet between a whole bunch of Transformers. And it does this right. It actually looks great. It shows us that they know how to film action scenes (computerized ones, of course,) and give us what we want. And it also makes a statement, that they are not going to shy away from the excitement.

That opening also gives us some backstory. It is actually a bit of a prequel sequence to even the very first Transformers movie. We watch the civil war happening on another planet between the Autobots (the good guys,) and the Deceptacons, (the bad guys.) we learn how Bumblebee ended up on earth, (which is where he is in the first Transformers movie,) and how the other Autobots are planning to come there. And then we travel with Bumblebee down to earth, and watch what happens when he arrives.

What happens is, his landing interrupts a military training exercise, and the military confronts him. Bumblebee scans a nearby vehicle, transforms into a copy of it, and escapes. But not before setting off a honing becon that alerts of the evil Deceptacons on another planet about his whereabouts. Those villains are Shatter and Dropkick, (voiced by Angela Bassett and Justin Thereoux.) They will be the two villains of the movie.

Speaking of voices, Bumblebee doesn’t really have one. He doesn’t in the other movies, and this film explains how he got that way. Right after being confronted by the military, a nearby Deceptacon attacks and demands to know the whereabouts of Optimus Prime. When Bumblebee refuses, that villain, named Blitzwing, rips Bumblebee’s voice box out.  From that point on, Bumblebee uses radio songs to communicate (something that happened in the first Transformers movie.)

This movie also explains how he got that name. Bumblebee is really named B-127, back in his planet. And after dealing with the military, he winds up transforming again, into an older, beat up looking car, and driving onto a junkyard where no one will bother with him. Except somebody does. An eighteen year old girl named Charlie, (Hailey Steinfeld, from the Coen Brothers True Grit,) who wants desperately to have a car of her own. The owner of the lot says it she can get it started then the car is hers, and of course she does.

Charlie has issues that she confronts throughout the movie about how after her father died, her mom moved onto a new boyfriend way too fast. And this movie does dig into that a little bit. But it also knows we’re here for the fun, goofy, B level action, and it gives us plenty of that as well. And this action is all filmed just right. So for example, in Michael Bay Transformers movies, whenever a robot would transform, we’d zoom in right up to the moving parts (turning gears and wheels and all that,) and then zoom out to see the finished product. Now, obviously the whole thing is fake and computerized, but zooming in makes it look like they’re hiding something from us, like a magic trick. What Bumblebee does is it shows the full transformation from far away. Far enough that you can see everything. That it’s clear there are no tricks being pulled on us. And it looks spectacular. Granted, Travis Knight had the opportunity to see what Bay was doing wrong, in all those other movies, and to fix it, but just look at some of the things he did in Kubo (the origami turned into fighting animals, the giant skeleton with swords in its skull,) and it’s pretty obvious this guy is a master artist if nothing else.

He also happens to be a talented filmmaker. Bumblebee might not have the greatest story at the end of the day, but how could it, given the source material? This is probably the best Transformers (the first one would be its only competition,) and it’s just about a tiny handful of characters, including both humans and robots. Which is probably another reason why it works. Sure, there’s a little teenage romance in there, but other than that, the relationships are about family members (siblings, mother-daughter,) as opposed to the FBI breathing down their necks trying to get them.

Regarding the FBI-like authority presence, there’s John Cena here as the head military commando, and he’s an actor that can be very hit and miss (so good in Trainwreck, but so bad in Blockers.) Either way, he is clearly on the up and up as a rising star, and this movie is smart enough to not play his character for comedy, the way previous Transformers used to, (just look at what they did with John Turturro in the earlier films.) There is definitely some comedy in this movie, but it’s mainly on the level of Bumblebee breaking things around the house, (which helps ground the movie, putting it on the small scale…. lamps are bring broken instead of giant skyscraper buildings.)  The final battle isn’t between armies of both Transformers and humans, but instead it’s simply Bumblebee fighting the two villainous robots. This movie knows what it’s doing. Finally. They got one right (perhaps the reason we liked the first one so much was in large part just because it was the first time we were seeing they kind of thing, and so we were able to ignore it’s flaws.) Bumblebee, on the other hand, has a lot to prove. There’s no good Will going into this one. And yet the movie defies the odds and pulls off something kind of cool, and a whole lot of fun.