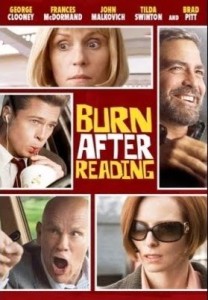 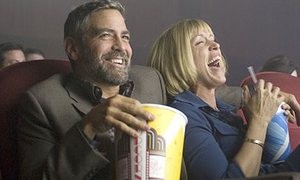 A dark and humorous spy movie with a clever intertwining plot of characters and brad pitt as the funniest he’s ever been.

The Coen brothers are some of the greatest filmmakers working in hollywood. their movies are dark, stylistic, and extremely funny. sometimes that humor is in a black comedy tone. other times, they make movies with no comedy at all, such as when they won the oscar for no country for old men. but two things are for certain…they never repeat themselves and their films always involve killing.

Burn After Reading is their take on the cia and how it might be called the intelligence business, but the people working there can be some of the dumbest of the bunch. The simple premise is that two gym trainers get their hands on a cd that contains cia secrets and then engage in a game of blackmail with the man it belongs to. but that hardly does the movie justice as some of the main characters aren’t really involved in the blackmail plot at all.

instead, the other plot that seems to be going on simultaneously involves a series of affairs. people cheating on their spouses, filing for divorce against their spouses, and looking for love in all the wrong places. that’s where george clooney’s character comes in. He’s having an affair with john malkovich’s wife, played by tilda swinton (it’s a lot of fun watching clooney and swinton together as lovers here when just one year earlier they played such great enemies in michael clayton). clooney and swinton are both married and are both cheating on their spouses.

for the first twenty minutes or so of the movie we are with just these characters. malkovich (osbourne cox) and swinton (mrs. cox), have issues to work out with each other. for one, he has just quit his job. that’s the way the movie opens, with him being called in to a top cia office and told that he’s going to be demoted. this leads to him quitting and typing up his memoirs, which will later become the cd that the gym trainers get their hands on.

after about twenty minutes or so have gone by, we are introduced to a whole new set of characters. these are the gym trainers. we meet linda litzky (frances mcdermond) as she goes for a conference with a plastic surgeon and decides she wants to have about four different expensive surgeries. we also meet chad (brad pitt), playing an absolute idiot, but really likable and kind hearted guy. chad looks over linda’s shoulder as she shows him the different men on a dating website that she’s using. later on in the film, she will start dating clooney’s character, harry, from this website.

Linda and Chad find the cd on the floor of the women’s locker room, and chad has one of his friends go through it and find out who it belongs to. he even gets the guy’s number. and they call him up together, hoping for a reward. the phone call itself is one of the funniest moments in the film, with pitt not knowing how to put it for what he has found and saying, “i want to talk to you about the security of your shit.” Linda is the conniving one between the two of them, with a reason for wanting money so that she can get her surgeries. chad, on the other hand, really does want to just be a good samaritan and maybe collect a small reward.

there is a meeting scene between cox and chad, where the plan is to hand the cd over to it’s rightful owner. that goes horribly wrong when cox sees what an idiot chad is and punches him in the face. chad nearly cries. and soon our two gym trainers are going to the russians with the cd, which is incredibly funny since they really have nothing but a bunch of lousy stories to offer. that and the fact that the russians aren’t really against the u.s. anymore, and end up just letting cox know that these two came in to meet with them.

harry, meanwhile, constantly sees cars off in the distance and thinks he’s being followed. that paranoia is aided by the coen brother’s excellent spy soundtrack with fast moving deep beats. He starts dating mcdermond and also works on the construction of a little basement project that is kept a secret from us until it’s finished. when we finally do see what it was, the moment is shockingly funny and definitely worth the wait.

At a certain point in this movie, main characters start dying. that’s a staple of coen brothers movies. just like in no country for men, the deaths are often completely unexpected and out of nowhere, or else they happen of screen and we merely get to hear about them. that’s because these guys don’t glamorize death, but try to show it that way it really is. and sometimes the wrong people get killed.

the movie is also sort of narrated by jk simmons and his second in command as something like a greek chorus, commentating on the events that have happened. these characters aren’t really involved with the others at all, but instead the sit back and reflect, almost like greek gods looking down from mount olympus. they are just one more very funny and smart component in this film. aside from them, the story connects the characters together with shocking moments and unexpected death. there’s a terrific cast here, with many oscar nominees and winners amoung the bunch. clooney, pitt, mcdermond, swinton, malkovich, and even richard jenkins. these guys are top performers and they have a very fun and clever story to be a part of.