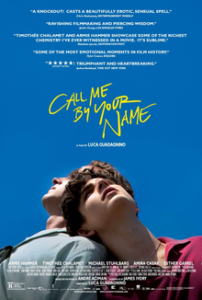 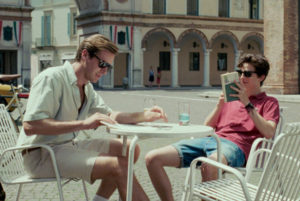 A movie about two young men who start up a relationship while overseas, this one starts out pretty entertaining, but once the characters get together, it finds itself with nowhere else to go.

Call Me By Your Name is not a very good movie. The setting and backdrop are there to make a beautiful film, with the movie taking place in Italy, but this movie is strictly about the relationship between a boy and the older student who comes to live with him and his family. That means even when there are hints of what might make for entertaining subplots, (such as one about how the student, Oliver, is there working on statue restoration and historical finds projects with the boy’s father,) those hints are quickly squashed. The movie works for a little while, before the two young men get together, and there’s a tiptoeing around their feelings element in the air. But once they start exploring each other, the film finds itself having not much else to offer, and nowhere else to go.

Call Me By Your Name is the latest movie about a homosexual relationship to be up for accolades at the academy awards. Maybe it’s that there aren’t enough of these movies, or maybe that the subject matter is so delicate and still somewhat controversial, that these movies almost always find themselves nominated for honors. The year prior to this, Moonlight took home the best picture of the year Oscar. It was a good movie, but there’s a solid argument to be made for whether or not it truly deserved that award. A decade prior, Brokeback Mountain lost to Crash (and Brokeback was the better film.) and with Moonlight beating La La Land, perhaps a new message was being put out there to the world.

But not every one of these movies is necessaarily a good movie, just because of its subject matter. Call Me By Your Name demonstrates that pretty clearly. It takes place in Italy in the eighties, and so it naturally looks beautiful, but other than that, this movie has very little going for it.  It’s the story of a sort apprenticeship, where a college student from America, (Oliver, played by Armie Hammer,) comes to live with a family for the summer, in this small Italian town. The family is American, and only comes to Italy for a few months each year (in the summer and winter time.) And Oliver is the student of the professor, whose family he has been invited to come and stay with.

The professor is Mr. Perlman, played by Michael Stuhlbarg (so great in the Coen Brothers film A Serious Man.) He studies artifacts and relics, and every school year he finds one of his students to invite out to the countryside in Italy for the summer, to help him do research. If this movie were more about that relationship, and what the two of them did together in Italy, it would have been a far better film. But the apprenticeship situation is merely the setup. The relationship here, and main storyline is between Oliver and the Professor’s son, Elio (Timothee Chalamet.)

This young actor is clearly pretty talented and he’s also great at picking projects. Last year, Chalamet was also in Lady Bird (a far better film than this,) for which he probably deserved an acting nomination more than he did for this movie, (he was nominated for Call Me By Your Name.) And this year he’s got a movie called Beautiful Boy with Steve Carrell which looks pretty great. But Call me By Your Name, (despite it being Chalamet’s breakout film and the one that brought his name to the public’s attention,) is not very good.

So, why is the movie lousy? Because the story doesn’t really go anywhere or have real stakes. There’s no conflict here. It’s about the relationship between these two men, which is pretty uncomfortable due to the major age difference. It’s not enough to be about a gay relationship, but this movie wants to be as outrageous as possible, and so it features a high school student and Hammer, who is a full-blown adult, (although he’s playing a college student here.) The only interesting things in this movie happen before he and Elio actually get together.

The first portions of the movie feature the two of them dancing around their feelings for each other. Neither one is especially nice to the other, as they both try to play it cool. Elio, in particular, doesn’t like Oliver’s “too cool for anyone,” attitude, such as the way that Oliver always says, “later,” when leaving a place. And Elio tells his parents this,  looking for them to agree with him. Only they don’t. Perhaps they know what Elio’s thinking even before he does. After all, they do figure it out soon enough and are incredibly supportive of the situation between the two boys.

Going back to how much better the movie is before Elio and Oliver get together, than it is after, the best scene in the movie happens when the Professor is called out to the site of a discovery and brings both Elio and Oliver with him. There are the remains of a statue which have been recovered from underwater and the three guys drive out to the discovery site, (some abandoned docks,) to examine the pieces. And it’s the best scene in the movie. It’s the one scene that feels both unique and interesting. And there’s even humor in there too, as Oliver shakes Elio’s stand, in an act of agreeing to a truce, while using the hand of the stature to do it. But there are no more scenes like this,
(of the professor and Oliver working together,) in the rest of the film.

Instead, what we get are multiple scenes of the two boys having relations with each other. There are ways to tell this story without getting gratuitous, only this movie doesn’t seem to understand that.Where talking about two different oral sex scenes, one of which involves a peach that is used in a pretty gross way. When Brokeback Mountain told its guy on guy relationship story, we got one sex scene between the two leads, and that was it. It felt like the perfect amount. Here, in Call Me By Your Name, its overkill.

Since there are no conflicts in the story, the movie feels kind of empty. Oliver and Elio beat around the bush with getting together in the first half, until they do get together in the second half. And then they take an overseas trip together, before Oliver goes back home. Where is the conflict? Sure, the sentiment between these two guys is nice, and the way that Elio’s father sits down for a conversation with his son, explaining why he supports the two boys, but every story needs conflict as the backbone, and this movie somehow doesn’t have any,

Call Me By Your Name is a movie meant to be all surface level. It looks beautiful and does capture a certain free-spirited Italian attitude nicely. And the story of how Elio and Oliver get together is fine too. But once they actually do, the movie suddenly finds itself with no other real ideas. They do this together. Then they do that together. And the movie continues to go that way, over and over again. Even the ending, where there is some sort of closure, feels kind of meaningless without there being any challenge thrown into their relationship. I expected more from this film.