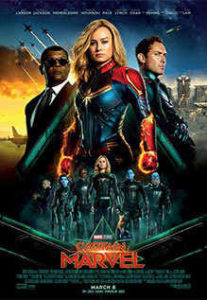 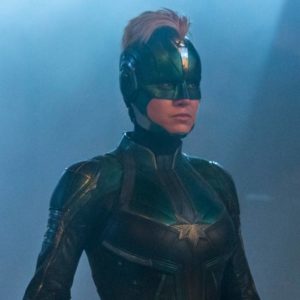 A pretty cool action movie with some nice surprises and big ideas.

This is the single Marvel movie with more Easter Eggs than any other film, And rightly so, because after all this movie is not just an origin story, but also a prequel. It’s the first film made in the series that takes place before Iron Man (the very first movie in the MCU,) took place. And so the movie very creatively fits in Nick Fury and a sort of origin story for him in here as well. The references and connections and explanations of plot points that will come out in later MCU movies, are all great. But this movie also works on its own. It is an origin story for Carol Danvers – Aka Captain Marvel, only it doesn’t work the same way as any origin story we have seen before. Here, the movie starts out with Danvers having all of her powers, and only during the course of the film do we see occasional flashbacks to what was happening in her life that lead up to this. Seeing an origin story told in this way is a nice change of pace. And there are plenty of twists to keep the movie on track, moving forward at all times. The action isn’t especially great, but between the story, the references, and the humor, this is definitely an entertaining film.

Captain Marvel is the first female led film from the MCU (Marvel Cinematic Universe.) Now, that says something for the studio that prides itself on being progressive, politically correct, and powerful enough to make important statements. Their movie Black Panther, from the previous year, resonated so heavily with people that it debuted in February and was still being talked about by years end. Captain Marvel might not have that kind of lasting power, (few movies do,) but this is still an impressive film. For one thing, just like the way that Black Panther tackled real issues of black kids born without father figures or guidance, as well as helping out countries that are less fortunate than your own, Captain Marvel also tackles issues, and not necessarily the ones you’d expect.

This movie covers everything from abusive relationships to refugees and doing the right thing by helping them find a home, (especially relevant to what’s going on in the U.S. with the current political issue of Mexico and a potential border wall.) But aside from messages and deeper political / social meaning, the movie works on all kinds of other levels. For one thing, it does everything it can think of to be a totally unique and creative origin story. This movie knows that we’ve seen tons of origin stories before. At this point, just in the MCU alone, those numbers are starting to stack up. There’s no question that Iron Man, Doctor Strange, Black Panther and Batman Begins, (not an MCU movie, I know,) are all very similar in terms of their structure. Wealthy, arrogant guy at the top of his game, forced to spend time training oversees in a poor, stripped down country, and returns a changed man, with a new outlook on life.

Captain Marvel doesn’t want to do any of that. It doesn’t even want to show us this hero getting her powers (like Ant Man or Captain America: The First Avenger, to drop in a few more.) Instead, this movie begins with Captain Marvel, or Carol Danvers, or Veers, as she’s called, already having her powers. And we’re not talking about just for a quick flash forward, before going back in time to the real beginnings of the story either, (like so many other films, including Iron Man, have done.) No, at the start of this movie, Danvers (Brie Larson) is already on her way, living the life of a Kree (an alien warrior,) on another planet, training to take on the Skrulls, a race of green alien shape shifters who can make themselves look and sound like anyone.

Danvers fights against Jude Law’s character, Yon-Rogg, in the opening, for a training sequence, where the two find themselves sparring in a gym-like workout room. When Danvers uses her powers more than the rules of the Kree permi,, she has to go and visit with the Supreme Intelligence, a cross between a god and mentor. The Supreme Intelligence offers Danvers some guidance, before sending her back. And that leads us to the gearing up scene for our first real action sequence. Danvers, Rogg, and three other Kree warriors, (including one from a previous Marvel movie – a great Easter Egg here,) are suiting up in a ship while traveling through space. They’ve got a tip on a planet where a bunch of Skulls are holed up, and they plan to pay these Skulls a visit.

Only that visit, or attack, goes horribly wrong, and Danvers finds herself on board the Skulls ship as their prisoner. They put her into some kind of machine which hangs her upside down while they go sifting through her brain and memories. And this is where we see the flashbacks to her human life, before she got powers, for the very first time. This is the place where most origin movies would begin (even Guardians of the Galaxy began with Peter Quill as a boy on earth, before anything extra-terrestrial happened to him.) Only here, in Captain Marvel, it’s used in a very creative and unusual way. The flashbacks are used like a video that the Skrulls are watching, and we hear the Skrulls talking over it while either fast forwarding or rewinding through each one. So we hear actor Ben Mendleson’s voice, (the leader of the Skrulls,) and he’s just as confused by what he’s watching as we are. His reactions are pretty hilarious.

And then Danvers  escapes, gets shot down to earth, and now it’s time for the grounded story that features a young Nick Fury, (Samuel L. Jackson.) Among all the other great accomplishments this movie has going for it, (and there’s a big one involving who the villains are,) one of the big ones has got to be the de-aging used here. Marvel has been working their way up to this point for a while. First with Michael Douglas in a small scene in the first Ant Man, then with Robert Downey Jr in Captain America Civil War, and next with Kurt Russell in Guardians Volume 2. And now, they’ve perfected it, to the point where they can actually use it on a character for the entire movie. So the Nick Fury looks decades younger than when when he debuted in the first Iron Man film. Agent Phil Coulson, (Clark Greg,) is de-aged too, but it’s Sam Jackson’s Nick Fury who steals the show, and whose de-aging looks truly flawless and incredible here.

When Danvers arrives on earth, crash landing through the roof of a Blockbuster Video Store, (let the 90s nostalgia begin,) the year is 1994. At first it’s just a security guard who Danvers converses with, but the next morning  Agent Fury arrives on the scene, and of course, he doesn’t believe the alien story Danvers lays on him, in the slightest. But very quickly a whole bunch of pieces start coming together  right in front of Fury’s face. Pieces that would be impossible to ignore. Skrulls show up and shoot at Danvers using some kind of crazy alien gun, and let’s just say Fury gets a surprise visit in his car. After seeing all of this, Fury is ready to believe.

So now the story becomes about finding out what all of it means. What is this mysterious “project” that Danvers has in her head, and why does she keep getting flashbacks as if she’s been on earth before? This act of finding answers gets a little slow at times, but no fear… plenty of techniques are employed to help keep the pace alive. First, there’s all the comedy between Fury and Danvers, and there’s a whole lot. Secondly, the surprise about the villains comes in this act, and finally, there’s a visit to the woman who was Danvers’ friend and copilot back during days on earth. This visit definitely helps clear things up. It might be slow compared to other acts in the movie, but it still runs smoothly.

As we move toward the final act, more and more connections to other MCU films start to unfold. There’s a pretty important piece about one of the infinity stones that connects nicely to movies that came both before and after this, as well as some notes about the villains that will appear in the first Guardians of the Galaxy movie. A few years ago, the Star Wars movie series gave us Rogue One, a middle film that was meant to connect the prequels with the original Star Wars series. That was the first time we ever really got anything like this, a movie series that was already so big that their were films both before and after, and the current one was meant to flesh out some of the in between moments that would connect two films together. Captain Marvel is the MCUs version of that situation. It isn’t quite the same – this is more of a prequel than an in between film (we will get an in between film when with Black Widow, taking place after Captain America Civil War, but before the Infinity War films.) Still, it does help flesh out a whole lot of what’s been happening in the MCU. This is the most Easter Egg heavy movie yet, in terms of connecting pieces and plot points together (whereas Guardians might be loaded up with Easter Eggs that are more like homages – such as we get when we pay a visit to the Collector.)

Captain Marvel is one of the first movies to explore the 90s as a decade with its own characteristics and personality. There have been countless movies that have done that for the 80s, from The Wedding Singer to Hot Tub Time Machine, and understandably so, with how crazy the outfits and ideas were. But the 90s…barely any. And that leads do some fun references including loads of great music by artists like Nirvana, Hole,  and Garbage. But some of the music choices don’t work as well as others. The No Doubt song “I’m Just A Girl,”certainly falls a little flat. More could have been done with the 90s, but you have to give this movie credit for trying.  And other than that, and a middle act that is a little slow at times, this is a pretty great film. It tries to do a lot and it mostly accomplishes its goal.