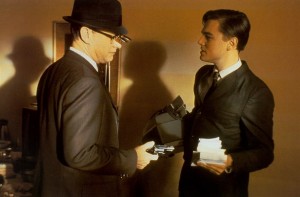 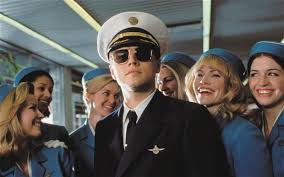 Light hearted escapist fun told as a cat and mouse story with clever ways of outsmarting the police and slipping through the cracks.

Catch Me If You Can is a fun movie. It’s lighthearted and often comedic, but at the same time there’s always an underlying feel of tension. Credit that to John Williams’ edgy little score which makes you feel like someone is always creeping up on you, watching every move you make.

The movie is about a young con-artist, Frank Abagnale, played by Leonardo DiCaprio, who finds ways to manipulate the system, mostly posing as people he’s not. It starts off with him in prison and the Tom Hanks FBI man outside his cell. This is a scene that will come much later in the film, but opens the movie up serving as an introduction to both characters. It’s a good thing, because we are about to leap frog backwards in time to long before Frank ever started his schemes, and would therefore not be seeing the Tom Hanks character for quite a while.

The movie takes us back to when Frank was a happy young man at home with his parents. Christopher Walken plays his father as a tired, beat-up man who is happy in love, but has the IRS constantly pounding at his door, taking him for more and more money. Before long the happy in love part starts to go down the drain, as the young French woman he is married to begins to have affairs. Frank’s father takes him out one day to pull a little scam on the bank. It’s a trick where both he and Frank dress up real nice in suits, Frank acts as the driver of a fancy car, and the father walks into the bank to get a loan. The idea is that if you dress the part and look the part, people will be distracted and easily convinced. It goes right alongside the line his father tells him, “You know why the Yankees always win? Because the other team is too busy looking at the pin stripes on their uniforms.” The idea is that outfits can be very deceiving.

And this becomes Frank’s credo when he runs away from his parents during their inevitable divorce proceedings. The movie was directed by Steven Speilberg, and he really puts you into the character’s shoes when a lawyer comes over to the house and makes Frank have to choose between his two parents. That’s what sets him off and running.

Frank’s first scam is to get some money and he does this by forging checks of the airline company Pan America (ironic, since DiCaprio took this company on in another movie, The Aviator). He uses the decals that can be removed off toy planes when soaked in water, and carefully places them on the checks to make them look real. He wears a real Pan Am pilot’s uniform and between the uniform and the authentic looking checks, he’s able to cash these checks anywhere he goes.

After this gets him some money, he decides to take it up a notch and actually approach the airlines, pretending to be one of their pilots. They drop him right in as a copilot, who gets to sit up at the front, but doesn’t have to actually fly the plane. That’s the pilot’s job.

Well, the forgery and the illegitimate checks start to catch up to him and Tom Hanks playing FBI man Carl Hanratty is called in. He and his team start to go after this kid, and they’re pretty good. Hanratty’s first run-in with Frank is quite amusing, with Frank pulling out all the stops and using every bit of trickery he’s learned.

Pretty soon Frank has to switch it up and he starts posing as a doctor at a hospital, watching doctor shows, using dialogue that he’s heard on TV and then reciting it himself at the hospital. From his position at the hospital he meets a young lady and starts up a romance, and gets inspired to become a lawyer.

The list of jobs Frank impersonates and scams he pulls goes on and on. And all the while, Tom Hanks is there to fall for his tricks, and Frank is calling him every Christmas Eve just to have someone to talk to. On the one hand it’s the road runner vs Wiley Coyote and it’s quite amusing. On the other hand, these guys aren’t enemies, but in a strange sense, kind of friends. It’s a comedy all the way around, but Speilberg treats his story realistically, having Frank constantly speaking to people on the inside, asking questions, learning how things work and what he might be able to get away with.

Steven Speilberg is a pretty serious director who has made classic films like Jaws, Schindler’s List, and Saving Private Ryan. But he’s also a guy who knows how to have fun. He’s the guy who made Indiana Jones, the ultimate adventure movies, but never got so serious with them that he forgot to put in constant little touches of comedy. His directing efforts are not always great, and in the last ten years or so he’s had more than a few misses. AI: Artificial Intelligence, War of the Worlds, and The Terminal are some examples of this. But with Catch Me If You Can, he shows that he can take a fun little premise and carefully weave the web to keep it going and tell a full story from beginning to end. It’s not surprising that the movie is fun, but what it surprising is that we never get tired of it. Speilberg, like Frank Abignale in the movie, has quite a few tricks up his sleeve that he’s learned over the years, and in this movie he has plenty of opportunities to use them.