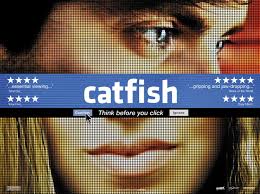 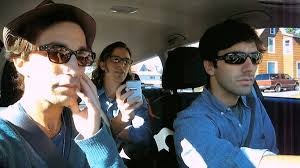 What starts out as an interesting and creepy documentary, unfortunately begins heading  downhill much earlier than it should have.

A classic filmmaker once said about making a monster movie, when your monster is dead, your movie is over. the longer you keep it going after that, the more steam it lets go of and momentum it loses. that’s exactly the problem with catfish, a movie that builds and builds and really brings us in, but then comes to the climax and doesn’t quite deliver. to make matters worse, it just goes on for a long time after that, as if it was trying to tack on an endless epilogue that refused to let us go.

the movie is supposedly a documentary, although the details surrounding how truthful it all is seem sketchy at best. apparently this is the film about a guy named nev who started talking to a woman online whose young daughter was an artist. that girl, abby, was just a child, but painted some amazing pictures. and nev was interested in them and wanted to buy or help sell them. the mom, angela, was the one who nev had the most contact with, and for some reason, nev’s friends decided to make a documentary about this. therein lies the reason for doubt. is this really a subject to make a documentary about? yes, it gets a whole lot more interesting than that, because there are lies and acts of deception around the corner, but from this initial situation would anyone really think to crack out a camera and start filming interviews?

perhaps the friends sensed that angela was lying. perhaps they didn’t have the decency to tell nev their thoughts because they thought it would make for a better film if they kept their suspicions to themselves. but then are we to believe that nev himself, not only believed all of these stories from angela, but never questioned his friends? are we to believe that he never asked them why they were filming or wondered what they saw in this story that could possibly be interesting enough for a documentary?

the more likely scenario is that this is not a documentary at all, but a mocumentary. a sort of blair witch project-like, “let’s make up a story and pretend it’s real and film it like a documentary”-type of deal. and that’s fine. it certainly makes a lot more sense. but then there’s the question of why it wasn’t more climactic or exciting. why was the revelation exactly what we and they expected it to be, and nothing more? where’s the fun in that?

the setup of the movie is what makes it such an intriguing film. for anyone who has ever been lied to before and has bought into it and believed it, even when they knew in the back of their heads that something wasn’t quite right, this is a film about that captures that somewhat paranoid mentality. and the part that’s so scary is when you don’t know. when you think there is something being hidden, and that there’s a sort of conspiracy and coverup going on, and you kind of hope you’re right, because it just seems so exciting.

in today’s age of online discussions, friendships, relationships, and deals, this sort of thing happens all the time. hot girls seem interested in young guys and seem like the perfect catch in every way until suddenly they ask the guys to send over money. that’s pretty much what happens to nev. not the money part, but certainly the hot girl part. angela turns the conversations away from her daughter abby and instead makes it about the whole family. nev starts hearing about abby’s older brother and her older sister. and the older sister, megan, looks like a supermodel.

at this point, one might say, “oh, come on, is he really buying this?” but as someone who has been there in his shoes i can say that it is easy to believe that a girl you are talking to is hot. that’s because you want to believe it. you hope for something like that to happen and when it does, even if there’s a doubt, you still try to believe that the doubt is wrong and just your own ridiculous suspicions.

but things start to get really interesting and creepy when megan’s brother sends nev a weird message about how nev is acting to her and then megan starts sending nev music, claiming that she’s the one singing it. at first nev really digs the music, but then he looks closer at it and starts to realize things aren’t quite what they seem.

the movie builds up to a point where nev and his friends decide to drive out to where abby, angela, and megan supposedly live, and to confront them head on. that drive is the high point of the movie as they close in on their enemy and try to get to the bottom of the mystery once and for all. and they do get some answers. but then the movie keeps going. that’s because they don’t quite have all the answers they’re looking for and want to keep pursuing the truth until the they do, but the exciting parts are over. so why keep the movie going for a whole long time after that?

Catfish is an intriguing movie that definitely captivates and enthralls, but it’s climax is less than satisfying. and then it just keeps on going after that, getting worse and worse the longer it drags on. i suppose nev and his buddies didn’t just want to know the what, about what was really happening, but they also wanted to know why. and i suppose they do get some answers by the end. still, there’s no question that all the excitement of the first half is long gone by the time we are in the second half. and that’s a problem. it feels like the air has been deflated out of the balloon, and we long for that excitement to return, but unfortunately it never does. there is certainly an interesting movie here, but it doesn’t maintain the excitement and interest of the audience the way it should.