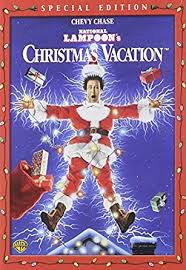 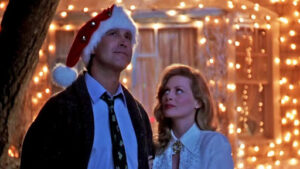 A Christmas classic, this movie knocks it out of the park with the physical comedy as it captures the spending time with family around the holidays situation perfectly.

Here’s a genuine holiday classic. It’s a movie that covers nearly all facets of the Christmas holiday, from shopping to cutting down a Christmas tree to setting up lights on the house to sledding. And it does all this by giving us a week in the life of the Griswald’s, a family that is getting ready for the holidays by trying to do it all. And of course just about every situation ends up in disaster. Chevy Chase plays Clark Griswald, the father of the family, who carries the movie. He can’t seem to catch a break as more family shows up to his house that week, looking to stay. The movie balances family humor with physical slapstick, and pulls it all off pretty smoothly. The ending might be a little too over the top, but otherwise this movie does everything right.

National Lampoon’s Christmas Vacation is most definitely a classic. From its fun, upbeat theme song to its protagonist Clark Griswald (Chevy Chase,) doing everything wrong and yet being entirely believable in his level of stupidity, this movie does it all. It even makes the smart decision to not just focus on one night, (Christmas Eve,) but instead to take us through the whole week leading up to that event. This helps us get to know the family, what they are dealing with, and the relationships and problems they have going on in their lives. We actually care about these characters, which is something that you certainly can’t say about every comedy. Too often with comedy all that matters is whether the movie gets the laughs. This film actually has them both. Laughs and heart.

The story has Clark Griswald planning for the biggest Christmas yet with boatloads of family members coming to stay with them. There are his parents. There are his wife, Ellen (Beverly D’Angelo’s) parents. There’a an elderly Aunt and Uncle. There’s even Clark’s cousin Eddie, and his whole family, including a wife, two kids, and a dog.  And they’re all coming to stay under one roof. But the movie gets going long before all that with the many different things that Griswald must do to prepare for the holiday. And he’s one of those guys who goes all out with Christmas decorations, getting a real tree, and everything.

First there’s the cutting down of that tree. And even the drive to the tree lot is fun, as Clark and his family get into a road rage incident that leads to them getting trapped underneath a semi-truck while still in motion. This is the opening scene of the movie, and it’s a pretty exciting one, culminating in an accident that sends their car flying through the air and landing at the lot. It’s the first sign that this movie will often be more in ling with slap-stick than realism, since the car accident leaves no real damage at all. And it’s a tradeoff that is well-worth it, since so much of the humor here works. It might not be laugh out loud funny or anything, but it is definitely worth of some good chuckles. And after that road rage encounter, near-car accident and landing at the lot that opens the movie, the characters finally get out to go find their tree.

Only they don’t buy a tree from the lot. They wander into an empty field, find a tree that’s just sitting there in the middle of nowhere, and cut it down. The reason,  Griswald tells his family, is because the trees on the lot were overpriced. They cut the tree down and bring it home, and now there’s the opening up the tree, which is also a whole big thing. If you think about it, every step of the way with this tree is its own comedic scene, starting with the drive to the lot. As far as opening the tree up in the house, let’s just say it involves a lot of broken windows and sap. Griswald is still dealing with the ramifications of the sap that night, while in bed with his wife, as everything from magazine pages to his lamp to his wife’s hair sticks to his hand.

The next day, it’s back to work, and the introduction of what will be a major problem later on in the movie… the question of the Christmas bonus. Griswald is expecting to get his bonus this year, just like he does every year, and thinks it just might be big enough to put in a pool. And here, early on, we meet the big boss, played Brian Doyle Murray, (Bill’s brother.) We hear about Griswald’s aspirations for the pool, as he talks to a friend at work. Then we go with him to a department store for a little holiday shopping, which turns into a whole lot of flirting. Or attempt at flirting gone horribly wrong. This is actually one of the funnier scenes as Griswold just keeps tripping right over his own words. When it’s not physical comedy in this movie, it’s verbal comedy, and Chevy Chase handles it all pretty smoothly.

At this point, we’ve gotten the tree scene (or scenes,) we’ve gotten the shopping scene, it’s now we are onto the putting up the lights scene. This movie covers it all. And every task turns into a major challenge. Knowing the Chaplin-like physicality of this movie, you can imagine where the putting-lights-on-the-roof scene ends up going. And this movie not only has fun at Griswald’s expense, but also at the expense of his two neighbors, a yuppie couple, (the woman there, is played by Julia Louis Dreyfuss, better known as Elaine from Seinfeld.) This couple hates Griswald and he hates them right back, with insults constantly being thrown at each other. And during the course of the movie, Griswald’s physical mishaps end up leading to more and more damage happening to the home of the couple. By the time they sit down for dinner and a tree bursts through their glass window, right in front of them, we know there’s no limit to what can happen to these two.

But getting back to the many activities for just a moment, the list continues throughout the film. There’s going up to the attic to hide presents, and there’s going sledding down a hill to add to what we’ve already got. And for every activity they can think of, the question really becomes just how badly can this thing go wrong. I’m surprised they didn’t add building a snowman or singing carols from door to door around the neighborhood to the list. And what about a visit to Santa at the mall? Then again, I guess A Christmas Story and Miracle on 34th Street have that one covered. And with this movie, realistically there would have been no way to cover everything, although Santa does make an appearance at the end, with one character dressing up as the iconic figure when he goes out on an unusual mission.

The hiding presents in the attic scene leads to Griswald getting stuck up there, and sitting around freezing while watching old movies. But the highlight here is when he steps one floorboard and repeatedly gets smacked in the face with them, like he’s a character in a Looney-Tunes cartoon. And the scene culminates with Griswald crashing right through the floor. This is the general pattern of the movie. Every scene and every activity turns into a disaster. The lights scene doesn’t just involve the putting up of the lights and falling off the roof, but then also running into a problem with actually turning them on.  The sledding scene doesn’t just take Griswold down a hill, but through a shack, across a highway, and into a store parking lot. To say this movie goes all out is an understatement.

While pretty much everything about this movie works, some parts work a little better than others. The ending, for example, where a villainous character has a change of heart, feels a little unrealistic. But I suppose it’s got touches of A Christmas Carol with that, so who can fault it for getting inspiration from that classic tale? As far as National Lampoon Vacation movies go, this one is probably the best. The original is fun, and European Vacation is okay, but this movie exists on its own as more than just part of a series (the way those other movies seem to be.) Christmas Vacation has become a holiday classic with humor that works despite it being decades after the film was made.

There are lots of reasons why this movie works, from the songs to the activities gone wrong, to the humor. There’s also the cast. Chevy Chase, in particular, knocks it out of the park as the everyman protagonist, Clark Griswold. But the supporting cast is also pretty great with Randy Quaid playing Cousin Eddie (a recurring character n these movies,)and then there’s Beverly D’Angelo, along with Johnny Galecki and Juliette Lewis as the kids. The movie might get a little too carried away with its humor and madness at the end, but it’s still pretty great, and a classic holiday film.