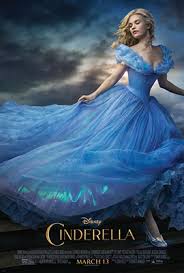 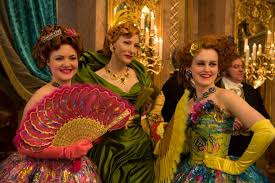 A really well-made rendering of the classic tale, this one moves at a quick pace and looks fantastic in every frame.

This is a very entertaining and enjoybale version of the classic tale. It’s the first of the recent live action Disney films to actually tell the story the way we remember it (unlike Maleficent or Snow White and the Huntsman.) This movie doesn’t stray far from the usual version of the tale, and instead spends its time and focus on the magical splendor of it all. That’s basically a way of saying that the film looks fantastic. The pacing is quick and to the point, and we get a movie that not only moves along nicely, but contains some very exciting scenes. The stepmother, played by Cate Blanchet, is fantastically evil, and the transformation scenes, both before and after the ball, are truly wonderful. Even the Prince has wit and charm. The movie is definitely one for the whole family, and it works on multiple levels for both kids and adults.

Cinderella is one of the first of the live action Disney movies that has become the new trend in Hollywood. The studio is having a field day right now, between its Marvel properties, its Star Wars properties, and now these kinds of films. Everything imaginable has been greenlit at this point, from a live action Dumbo film to a Mulan movie and prequel to Aladdin about Genies. And it’s all supposedly planned to be live action. The trend has been going on for about two years now,  starting with movies like Snow White and The Huntsman and Maleficent. Cinderella marks the third film in the bunch and the first one to truly focus on the hero, that we have all come to know and love. Maleficent was hardly a Sleeping Beauty movie, featuring the villain as the main character, and the Snow White film focussed much more on the Huntsman and the evil Queen. So much so, in fact, that in the sequel, The Huntsman: Winter’s War, Snow White is nowhere to be found. Cinderella is a very different kind of film than those others.

With Cinderella, it’s a classic take on a classic tale. Unlike those other two films, this one isn’t trying to tell the story from a new angle and from the point of view of a new character. Instead, it is very much the usual tale, the same way that we have heard it before. And yet, this movie still finds ways to be captivating and enjoyable. Chalk that up to director Kenneth Branagh, for starters. Branagh isn’t always the best director (Jack Ryan: Shadow Recruit,) but when it comes to fantasy and sweeping scopes that look fantastic, (Thor,) he really goes out of his way to get the artistic element just right. With Cinderella he shows that he can apply this skill to a storline that we are all very familiar with.

At the start of the film, we are introduced to a well-off and happy family. They live in a large house, which is more of an estate, and there’s a young mother and father who have a daughter named Ella. It is the voice of the fairy godmother (played by Helen Bonham Carter,) that narrates the film, or at least the start of it, introducing us to the characters and the situation. Ella’s mother believes in magic and fairy god mothers and she imparts these ideas to her daughter. The entire opening is filmed with wonderful colors and grand sweeping shots of the house. There are animals running around outside and all kinds of friendly faces serving as the help and working in and around the house.

But then the story takes a sad note as the mother becomes ill  passes away. Before dying, she gives some final advice to her daughter, telling Ella to always have courage and be kind. After this passing, Ella sees her father continue to get more and more unhappy each day, and when he comes to her with the idea of remarrying, she is very supportive of the notion. This is a pretty great scene, with the father really taking the time out to see what his daughter thinks, and almost asking for her permission. It’s one of the father’s best scenes and strongest moments. As played by Ben Chapin, the father is a likable character and it’s a shame he doesn’t have more screentime.

Soon Ella’s new stepmother arrives, along with her two ridiculous daughters. The stepmother has recently become a widow, enabling her to marry Ella’s father, and so she has a reason for dressing in black (other than that it is an easy way to present a villain as evil.) What is unexplained is why her cat is named Lucifer. Who would ever name a cat this? None the less, her daughters dress in horribly bright and super monochromatic outfits, and are very annoying from the moment they enter the house. Their first comments to the father are asking him how old the house has been in his family and then, following his response, they question how in all that time he has never thought to decorate the place.

These girls are not very pleseant, and their mother, played by the wonderful Cate Blanchet, is hardly much better. Not long after the father moves them in does the stepmother begin to throw lavish parties filled with drinking and gambling. The father wants no part of this and confides himself to his study wear he sits at a desk wearing glasses and pouring over a book. Pretty soon the father goes away on business and a messenger later tells us that he took ill on the road and passed away. Now everything is about to change. It was already bad, like when the father left and immediately the step mother moved Ella’s room up to the attic so that the step sisters could each have their own rooms, one of them taking Ella’s old room. Now, things are about to get a whole lot worse.

Between the being locked away in the attic, (Rapunzel-like,) and the stepsisters being nearly identical twins except for their super bright colored outfits, which are different colors, (the fairies of Sleeping Beauty,) and the father being a traveling salesman of sorts and going out on the road where he finds trouble, (Beauty and the Beast,) this film sure does take a lot of ideas of other classic Disney stories. Lucily it doesn’t beat us over the head with any of these themes and mostly keeps them pretty subtle. When the father passes away, the stepmother begins to really show her true colors for the very first time. She fires all of the help, claiming that the family is now in financial trouble. Then she starts making Ella do all of the chores.

One day Ella wakes up and makes the family breakfast. She fell asleep next to the fireplace the night before and woke up with ashes (or cinders) on her face. Because of this, the stepsisters and mother now start calling her Cinderella. They also refuse to let her sit at the table with them for breakfast. Ella runs out in anger, and heads for the woods. Once there, she meets the Prince who is out for a hunt (the actor who played Robb Stark on HBO’s Game of Thrones,) and has a brief conversation with them. It’s enough to capture the Prince’s attention and make him spare the deer that he was hunting. Once back at the castle, he decides to call for a ball, hoping to see Ella again.

The transformation of the all of the materials and creatures, to get Ella in ball ready condition, is fantastic. In fact, it is the best part of the entire movie. That and the transformation back sequence. The fair godmother shows up, does a few magic tricks, and suddenly everything starts turning into something else. From the pumpkin which turns into a stage coach to the lizards who become footmen to the goose who becomes the coach driver, it is all fantastic. In a matter of minutes, Ella looks completely different and is ready for the ball.

The ball and run down the stair at the storke of midnight and then hunt for the woman whose foot will fit the glass slipper are all pretty routine and very much the way we have seen them before. Still, the movie keeps the pace moving fast, and the humor and charm of the film go a long way to carrying every scene, whether completely fresh ans creative or not. It’s hard to come away not liking this movie, and a lot of that has to do with how fantastic everything looks, and how quickly the storyline moves. The question remains unanswered as to why the slipper doesn’t change back to Ella’s old shoes the same way everything else created by the fairy godmother does. But that’s a question for the author of the original tale, and is something that comes up in every reincarnation fo this story. The movie is lively, energetic, and a lot of fun.