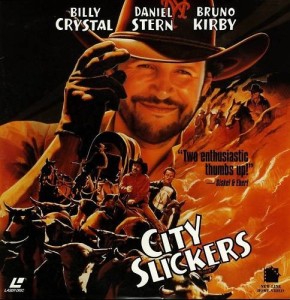 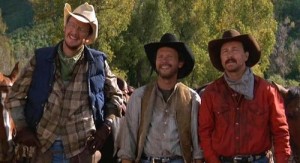 A western with heart, this movie not only delivers on the laughs and excitement, but also on the characters and emotions.

A pretty great movie, this one works on multiple levels. It’s a modern western, but also a comedy, and a whole bunch of the film takes place with the main characters trapped in big city life, before ever heading out west. That’s when we really get to understand the problems of Mitch (Billy Crystal,) who is currently having a mid-life crisis. If the first segments, about the boys in their regular lives, are fun, once they get out west, the real adventure begins. The characters take on a mission to drive cattle for the owners of a ranch, and its all supervised like a camp. Only problems start piling up, one after another, and soon the boys are off on the greatest adventure of their lives.

City Slickers is one of the best modern westerns around. Certainly one of the best modern western comedies. It’s this and The Three Amigos, and really not a whole lot else. The film is about characters in present day big city life who decide to take a trip to a dude ranch in the middle of New Mexico for two weeks. It will be a vacation where they are acting out their childhood fantasy of being cowboys and driving cattle from one state to another. The movie works as a vacation film, as a movie about friendship, and as a comedy about a man in a mid-life crisis.

One thing that really goes a long way for this film is the setup. There is a whole lot happening here before the characters ever make it out west. First, the film begins with the boys doing the famous bull run in Spain. This is all meant to show us their adventurous spirit and way of inspiring each other to do crazy and wild trips. Mitch (Billy Crystal,) even gets goured by one of the bulls. And then there’s the plane ride home, where we meet each of their wives, and start to get a sense about each relationship.

There is Ed (Bruno Kirby,) who dates women that are nearly half his age, and Phil (Daniel Stern,) who is in the worst relationship imaginable. His wife is like a dictator, and her father is his boss, treating him like crap. And all of this comes out pretty early on. When they all return to Manhattan, it is Mitch’s twenty ninth birthday, and a whole lot of funny moments come as a result of that.

There is the phonecall from Mitch’s mom, waking him and his wife up, where Mitch can recite every word right as his mom is saying it. Then there’s the meeting with his boss, where Mitch has to defend buying air time on the radio for terrible commercials. After that, it’s Mitch going to his son, Danny’s school, to do a presentation about his job. That one goes horribly wrong. First Danny lies to his class about what his father does. Then Mitch makes his job sound terrible to the kids. It all ends with him going on a depressing rant about how a person changes through the decades of life.

All of this leads to Mitch’s birthday party, where Phil gets an unexpected visitor, and the boys tell Mitch about their surprise present to the dude ranch. Now that’s a lot of setup. And it’s fantastic. It all works in such a way that you care about these characters long before you go on an adventure with them. Especially Mitch, who is clearly in the middle of a mid-life crisis. He hates his job, and has his responsibility taken away by a boss who undermines him. Mitch has a great conversation with his boss where he talks about how he’s never gonna look or feel any better than he does right now.

It’s amazing how much happens before the characters make it out west. It’s probably only twenty minutes or so, but every scene here counts, and every one of them is funny. And just like that, the characters head out to the countryside, arrive at the ranch, and start learning about what they’ll be doing. They are driving the cattle from New Mexico to Colorado, and there’s a trail boss named Curly (Jack Palance,) who will be supervising them. Aside from them, there are two young cowboys who are helping out and also a cook, all hired by the cattle owners to run the trip. There are these employees, and then a whole bunch of people we meet, who are guests at the ranch, just like them. What’s amazing is that the number of characters is really just right, and incredibly easy to remember. There are the two dentists, the two ice cream guys, and the hot woman who everyone has a crush on.

Curly is the standout of the bunch. He’s only in about half the movie, at most, but he’s the character you walk away remembering. So much so that the sequel was titled City Slickers II: The Legend of Curly’s Gold. Palanace won an oscar for his work here, and it is well-deserved. Here’s a guy who play the tough-talking, no-nonsense cowboy just right. Clint Eastwood couldn’t have done it better himself. Palance is been making westerns for ages, going all the way back to playing the villain in Shane. He and Mitch form an unusual relationship in this film, that brings them together on a number of occasions, despite Mitch being terrified of the man. At one point they even help a cow give birth and then spend the night away from the others, camping together.

One thing that really works out nicely is that there is tons of conflict down the line. If the first half of the movie is about learning the rules of the west, such as how to rope a cow, and establishing the characters, then the second half is about conflict. There are villains, accidents, deaths, and plenty of injuries. We even get some villains who have a couple of good scenes. And then there are the fights between the three friends and conflicts they cause themselves, such as a stampede when Mitch starts his battery operated coffee grinder.

The film also finds a nice way to get the three main characters alone for the climax, and it’s a hell of a sequence with them driving cattle through a river in the middle of a massive rain storm. We’re talking thunder and lightning and being carried down a river into the rapids and everything. The fantastic music only punctuates the sequence, and really the whole movie, making it all seem more epic.

This movie works on all kinds of levels. It is a really enjoyable comedy with great characters and lots of tension. Some of the conversations are dated, in particular a brief one about how to record from television on a VCR, but most of them are authentic and hold up. There’s one fantastic scene where the characters discuss their best and worst day ever. Scenes like that really give the movie heart. The comedy isn’t always as funny as it thinks it is, (there’s only so many times you can hear Billy Crystal do that stupid “Hellooo,” thing,) but most of it definitely works. These guys are believable, and their story is pretty great.