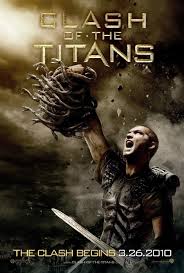 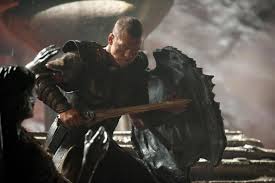 A solid B level action movie, this one has cool effects and giant monsterous beasts, and handles Greek mythology well, but the characters are pretty basic and one-noted.

Clash of the Titans could have been one of the coolest action movies, featuring a great story that scaled the heights of Greek Mythology. Instead, it’s just an okay film, enjoyable for its action and effects, but hardly the smartest movie with its basic characters, dialogue, and even story.  Imagine a movie that took on Greek mythology and spent almost an equal amount of time with the Greek gods as it did with the humans. Well, unfortunately, that is not this film. It is very much a movie about humans on earth fighting giant beasts that pop out of the ground. There is one sequence where our heroes ferry into the underworld to find and fight Medusa, more of that (traveling to other worlds,) would have gone a long way.  Still as an action movie, this one definitely works. It just doesn’t do a whole lot more.

Back in the late seventies – early eighties, when special effects at the movie were just starting to find their way, there were only two real methods for accomplishing a filmmakers goals in this department. Stuntmen or miniature models. Just look at the original Star Wars films, which utilized both methods. Special effects wizard Harry Hausen decides to try something new. Stop motion animation. Basically using puppets and putting them on screen next to humans. The 1981 movie Clash of the Titans, which used these effects to tell a story rooted in Greek mythology, was one of his biggest success stories. So much so, that the name had brand recognition, and now decades later, has been remade into a big budget action movie using the same overall story, but this time state of the art, computer special effects.

The idea to remake the film in this way was a good one.  After all, we don’t exactly have a lot of movies that feature Greek mythology. The closest one in recent times was Troy, which was about battle and human conflict, whereas Clash is all about the beasts. Now the movie could have been a whole lot better, and lacks in terms of characters, dialogue, and even sometimes storytelling. But for what it wants to be, a B level action movie with cool monsters and effects, this one works. As directed by Louis Letterier, (The Transporter movies and then the Edward Norton Incredible Hulk film,) this exactly what you would expect to get.

This movie introduces, in an opening voice-over monologue, the story of the three gods on Mount Olympus and how they defeated the Titans. The three gods are Zeus, Hades, and Poseidon. Would you believe then, that we don’t even see Poseidon at any point in the entire movie? I loved the idea of spending some time on Mount Olympus, but the movie gives us a very minimal amount of scenes there, really just showing us one room. Yes, it’s cool that Liam Neeson is playing Zeus, and yes his outfits of gold and silver that shine so bright they become blurry and shimmery are pretty impressive. But why not spend a little more time with the gods? Why not make Poseidon a character too, instead of what basically amounts to a one on one conflict, on Mount Olympus, between Zeus and Hades?

Instead of exploring the world of the gods at all, this whole movie is really about man against beasts. The gods are angry, so they start throwing all kinds of giant creatures at man. And rightfully so, because whenever something goes wrong, the people blame it on the gods. At the start of the film, we see Perseus (Sam Worthington,) and hid father (Pete Postleworth,) on a ship out at see. They bring yo their fishing nets, see that there are no fish in them, and of course, Perseus’ father blames the gods. Then on the land, a bunch of men dressed in armor tear down a giant statue of Zeus and watch it crumble into the sea. What are these people thinking? Naturally the gods send winged beasts to attack.

We now move into the kingdom of Argos, where for some reason the Queen keeps the god-condemning and insulting alive. She talks about how her daughter is more beautiful than Athena, herself. You get the feeling that this is actually her stepdaughter, and that the Queen is jealous of her beauty (a little bit of Snow White here.) The Queen is hoping to bring punishment to the step daughter, and she does, but the Queen herself gets it the worst, when Hades shows up and kills her. And now Hades brings a threat to the people of Argos. In ten days time, he will release the Kraken on them, a giant beast from the sea. Their only way out is to sacrifice the princess.

And so a bunch of warriors venture out to find Hades, the gods, or something that will somehow stop the kraken. Perseus, (Sam Worthington, coming off the massive success of Avatar,) is the star here. He’s hardly a great actor. But he’s surrounded by talent, including Mads Mikkelsen (Casino Royale, Doctor Strange,) Nicolas Hoult (Beast in the X-Men films,) and Liam Cunningham (Davos on Gamr of Thrones.) Unfortunately, it isn’t until right before their final challenge, when a bunch of them die, that we really get to meet these characters. How much better would it have been if we got to meet them early (and really know exactly who was in the group,) and then if they died a little at a time with each challenge, instead of all at once?

What the movie does instead of that, is it gives us a ton of characters in this group, (let’s say about ten,) and dies kill them off little by little. But the problem is that we don’t necessarily feel that or realize it, because we never get to know the characters. And then the ones that we do get to know, end up dying all at the same time. It’s such a wasted opportunity. They should have narrowed it to only four or so (plus Perseus, a weird gray monster character who takes some giant scorpions and joins them, and a woman who is Perseus’ young mother.) Now that’s already seven characters, but at least then we would have gotten to know those four main friends, and would have felt their deaths. Especially if they each died st different points in the film.

But the movie isn’t really about smart storytelling or characters. If it was, then we would have some kind of idea what these guys are out there seeking. What exactly is their mission, other than to find a way to stop Hades? Do they have any destination? Instead, it seems like the whole point of their travels is to take on as many beasts as they can. Maybe it’s to find a weapon that can be used to defeat the kraken, in which case Medusa’s head does the trick, but there’s a problem with that too. Melissa’s head turns men into stone. Not even all humans. Just men. That point is made clear by Perseus’ mother who explains why she can’t go with them to fight Medusa. But the idea that it doesn’t work on you if you’re not a human is also made clear when the gray monster creature in their group doesn’t get affected by her head. So then why is Perseus so sure that he can use it on the kraken, which is most certainly not human? More explanation is needed with this. It doesn’t matter if it’s stupid or ridiculous explanation (all the rules here are made up and magestical anyway,) but at least acknowledge it.

And that brings us to the beasts or challenges themselves. While it’s not clear what the mission is for these guys, what is very clear is that there are a whole lot of creatures and challenges that come across. First, there are the giant scorpions, and boy are these things cool. The action is handled with all kinds of claw and tail attacks and tons of slow motion. This sequence is probably the highlight of the film. But there are also three blind women who share one eye, Pegasus the flying horse, the Medusa fight, and a deformed man / monster who was formerly the husband of Perseus’ mother, before she had the child with Zeus. And then, of course, there’s the kraken.

The challenges and monsters are generally pretty great. Sure the effects are computerized and hardly realistic, but if there’s one thing Letterier can direct, it’s action. And he has a lot of fun with this one.  Just look at the Medusa sequence. Medusa is simply supposed to be a woman with hair made of snakes. But under the reinterpretation in this film, she’s more of like a serpent herself, slithering around at rapid speeds while lashing out at characters or firing a bow and arrow. Talk about an upgrade! And the setting of this sequence, a temple swept up in fiery ruins, is pretty fantastic too. Clash of the Titans might be a movie with more than a few plot holes, but in terms of fun action, it definitely delivers!