Cloudy With A Chance of Meatballs *** 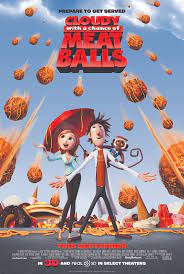 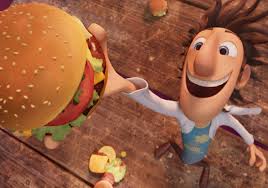 A very witty movie, the premise is basic enough,  but the amount of adventure they get out of this thing and the humor go a long way.

Here’s a movie that is very simple, and yet works because of its humor, more than anything else. The plot is about a town that only sells sardines and how one scientist in that town invents a machine that makes food fall from the sky. What works about it are all of the side characters and massive voice talents who showed up for this thing, mixed in with a constant supply of jokes. The other thing that works are all of the creative ways this movie explores the massive food idea, from a day of ice cream to a building made of jello. By the time the big problem and climax come about, this one starts to wear a little thin, and that’s mostly because it’s not about story, it’s about humor. Even still, this one is a fun time that doesn’t require much thought, but is definitely good for some laughs.

Cloudy With a Chance of Meatballs is the light-hearted animated movie based on the classic children’s book about food falling from the sky. It’s also the first movie by Phil Lord and Chris Miller, the comedy directing team behind The Lego Movie and both 21 and 22 Jump Street. Not to mention writing and producing Spider-Man: into the Spiderverse. To say these two are super talented and smart is an understatement. And Cloudy is their breakthrough movie.

Truth be told, it isn’t quite as good as some of their other work (the Jump Street movies in particular are absolutely hilarious, and there’s no shortage of compliments that can be given to Spiderverse.) But Cloudy is a fun movie. And like Light Year, another science-based animated movie, this one definitely stands as more of a B movie, funny without being very deep, kind of film.

The story centers on Flint Lockwood (Bill Hader,) a genius inventor, whose idols are guys like Einstein, Edison, and Tesla. We meet Flint as a boy, making his first invention…spray on shoes. The purpose of these is to solve the untied shoelace epidemic. Only things don’t go exactly as planned and Flint can’t get his spray on shoes off. He gets laughed at in school and feels like a failure until his mom gives him a pep talk and a lab coat, and then just like that he’s off to the races.

Flint lives in a town called Swallow Falls, where the only industry there is one for sardines. The town was big in the sardine business at one point, until the rest of the world realized that sardines are gross, and now the town is stuck with all these sardines, using them for everything you can think of. This prompts Flint to think of an invention that will feed everyone wherever kind of food they want. It’s a machine that generates food out of water. And Flint gets excited about presenting it to to the town.

The day he plans to present his invention is a day that the whole town will be gathered together to witness a big event. That event is the mayor’s unveiling of a new attraction… Sardineland, a sardine-themed amusement park. They’ve even brought in the town’s local celebrity Baby Brent (voiced by Andy Samberg,) the guy who was once the baby featured in their sardine adds, to cut the ribbon. And they’ve also brought in a female reporter from a big time news station in New York.

This reporter is Sam Sparks (Anna Farris,) and just because she’s from a big time station doesn’t mean she’s actually big time at all. It turns out she’s a weather girl who has never been on air before, and her network considers this a throw away, nothing story, so they send her out to cover it. “She’s cute and perky and that’s really all that matters.” Her executives say, when discussing sending her out for the story. And that’s a pretty good sample of the type of humor here… very blunt and ridiculous, and funny because of how direct it is. It’s like characters say what they’re really thinking at all times, with no filter. Another example comes when the mayor presents the new attraction by saying something along the lines of, “and now to present something I designed and paid for by spending all of the town’s money without consulting with anyone.”

During the theme park unveiling ceremony, Flint turns on his machine and it goes wild. the device gets away from him, bouncing all over the place like a wild dog off its leash, and ends up doing lots of damage all over the town. Specifically to Sardineland. It also ends up blasting up into the sky where it somehow gets stuck or disappears and doesn’t come beck down. Flint is in trouble. He feels like a failure. Not only did he blow his opportunity, but he destroyed the most exciting new thing te town had going for it. Sam Sparks also feels miserable, with her big break story ruined. The two of them meet on the docks, in a very funny moment where she accidentally jams her feet into his eyes, and they get to taking.

When Sam figured out who he is, and how he’s the one who set off that “rocket,” that destroyed everything, she naturally gets angry. That quickly goes away, however, when food starts falling from the sky. This happens slowly, in stages, first with thin slices of cheese landing in a nearby garbage can. Soon it’s full cheeseburgers. And it’s all over the town. Flint becomes an instant hero, and all of a sudden we have our success story and the town has its new niche, to get the worlds attention and hopefully get them out of being the Sardine capital.

Flint invents a catapulting truck to drive through the town, compress leftovers on the streets, and send them soaring through the air to a local dump. And we get a bunch of fun scenes involving food, from a jello palace that Flint makes to impress Sam (and that the two of them hang out inside of,) to an ice cream morning made to impress the local cop (voiced perfectly by Mr T’s,) son. The mayor is more into this food than anyone, insisting that bigger is better, and gobbling up as much food as he can at all times. Watching him grow in size is a running gag throughout the film.

The problem comes when the size of the food that the machine (which is stuck in the clouds,) produces keeps getting bigger and bigger. And Flint has no control of any of it. Soon then shine is producing massive storms of food, like a tornado made of spaghetti and meatballs. All of this prompts Flint and a group of friends, including Sam Sparks and for some reason Baby Brent, to take a plane into the clouds and try to shut down the machine. It makes for an exciting climax, and a nice end to the movie. Overall, this movie is fun. The ideas are pretty simple, but the humor is there, every step of the way. There are parts here that are a little too sappy (like Flint’s relationship with his father,) but not every animated movie is going to be deep, and it’s nice to sometimes have guilty pleasure films like this that you can just watch, enjoy, and unwind to.