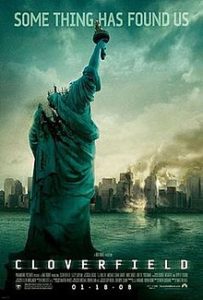 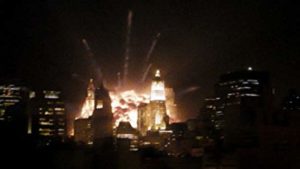 A very cool idea manages to show us a new twist on the giant creature attack genre.

Here’s a movie that takes the reality show, hand-held camera idea and applies it to a monster invasion film. Think of Blair Witch set in the middle of Manhattan, instead of in the woods, during this giant creature attack. The results are fantastic. The movie itself is good, without ever being great, and that has a lot to do with the plot and characters being just okay. But the execution is fantastic. For example, we get at least twenty minutes before the monster attacks, of a party where a rumor starts going around about two people who may have slept together, and we actually get invested in the way the rumor spreads and the humor of it all. We care about the story before the monster. And then when the monster attacks, it’s all out, and turns into a totally different film. Very unique and creative. Well-done.

We’ve all seen Godzilla movie and King Kong movies, and lots of other variations on the giant creature attacks a big city story. We’ve seen it done in countless ways, whether that means from the point of view of the military and government,  from the point of view of innocent bystander, regular people, or from the point of view of lots of different characters whose stories all end up coming together. But we haven’t seen is the film told through a single hand held camera, as if it was a documentary. That’a what Cloverfield gives us. Like the Blair Witch Project, it is not a documentary at all, and is a completely fictional story, but the use of first person point of view storytelling to have a character holding the camera at all times, really works.

The movie does something very smart, that most films would never even dare try. It doesn’t open with any hints of the monster at all. Not for what feels like close to fifteen minutes. Instead, it spends those first fifteen minutes or so really getting to know the characters. It does this by introducing other storylines that have nothing at all to do with the monster. Instead, these storylines are about relationships. There are a couple of super quick scenes at the start of the film, that we try to make sense of, but really aren’t given enough context about, (these scenes work nicely on a second viewing, when we actually know who the characters are.) But the first real scenes of the movie take place at an upscale apartment building where a surprise going away party is being set up.

Rob Hawkins, (Michael Stahl David,) is the character who is going away. He is going off to live in Japan. And all of these other people have come out to wish him farewell. Only we don’t see Rob for a little while. Instead, we start the movie with his brother, Jason Hawkins, (Mike Vogel,) who is working with his girlfriend to set the place up. His girlfriend seems to be the one organizing the whole event and she asks Jason to work a camera throughout the night, getting interviews, testimonials, and well wishes from people so that Rob can have the tape and watch it when he is over in Japan.

Jason doesn’t take very long to pass this responsibility off to Hud, (T.J. Miller from Silicon Valley,) and all of it is caught on camera. Jason’s girlfriend asking him, and then Jason asking and convincing Hud. And then the testimonials start, with Hud going around interviewing everyone. His goal is to use this as an opportunity to get to speak with Marlena, (Lizzy Caplan,) the girl he likes, who he is told will be at the party. And when she shows up, all of Hud’s attention goes to finding her, filming her, and then going over to talk to her. Meanwhile, Rob shows up at his party and a little bit of drama quickly unfolds.

Rob has been in an on again – off again relationship with a girl named Beth. And now Beth shows up to the party. Nobody knows what the situation is between Rob and Beth, but at the very least they know that Rob likes her, and that seeing her show up with a guy definitely gets to him. But Hud takes it upon himself to figure out why. And so he plays detective, sneaking into the hallway while Rob and Beth are having a private conservation, hearing them talk about how they slept with each other and recording it, and then going back into the party to tell everyone. Hud goes around telling it like a secret that he has just uncovered. And so what started as a series of interviews and well-wishes has now turned into us watching Hud tell each person the news. The whole thing is a lot of fun. This could be the movie itself.

And then the monster attacks. First, it just feels like an earthquake, with the lights going out and the building shaking. But then it happens again. And again. The news says it’s an earthquake, but our characters know better. They go running into the stairwell and down to the first floor. Then they get out of the building and join the crowd on the street where their are all sorts of noises coming from the night sky. Suddenly an object comes hurling out of the sky and rolling down the street. It’s the head of the Statue of Liberty. It’s pretty much a cliche for monster Movies and disaster movies to take on landmarks, (just think of Independence Day and the White House,) but here, just seeing the head of the Statue, it actually feels somewhat realistic and completely appropriate. It’s an incredibly powerful image.

From there our characters start moving from one place to the next. First it’s inside a convenience store. Then an electronics store while people are looting. Now, I’m no expert and I get that people feel like maybe it’s the end of the world or something, but are they really going to be cool with a guy just standing around holding a camera, recording everything as they run by with stolen TV sets? There’s no way this guy doesn’t get beat up or at least get the camera taken from him and smashed. But when you have a monster movie and the part that is unbelievable is a guy filming looters, you know you’re watching a pretty quality film.

After the stores, the characters make it onto a bridge. And that’s when the monster really starts attacking them. On the bridge, he uses his tail, and snaps the thing in half. At this point, our crew is a group of five characters. The two brothers, Jason’s girlfriend, Marlena, and Hud. And one by one, we will start losing them. Our first victim gets struck on the bridge. From there, our characters get off the bridge and head down into a subway tunnel. But not before we get to see a scene of a character calling the mother of the person who just died, to let her know what happened to her son. Moments like this make the movie feel all the more realistic.

Most movies would simply rely on doing the same things at this point and just riding the wave of whatever they already have setup. Cloverfield, is not like most movies. It keeps adding in new elements and twists. So when the characters go down into the subway tunnels and decide to walk the tracks, they find that it’s not just the giant monster up on the ground, tearing down buildings that they have to worry about,. But hear, in the subway tunnels, there are a bunch of smaller crawling and jumping alien insect like creatures. It’s Alien meets Mimc with these guys and they attack our characters, leaving one of them wounded badly.

We deal with the results of that, and then pretty soon a new mission has emerged. Get to Beth’s house. Rob has decided that more than anything in the world, he wants to be with her and to help her, during this time of crises, and so he is on a mission to get to her place and rescue her. And all of the other characters are coming along with him,. It’s pretty romantic. Especially considering how the film began, (those scenes before the party, when we didn’t really know who the characters were yet,) and also how it ends. The movie keeps us on the edge of our seat and does it in ways we have never really seen before. At least not for a monster movie. This film has minor flaws, (that looting scene, and also the idea that you can get from the bridges downtown to Columbus Circle on 59th Street, just by walking,) but for the most part, the movie really works. It delivers on the scares, the thrills, and the massive creativity.