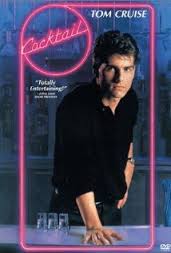 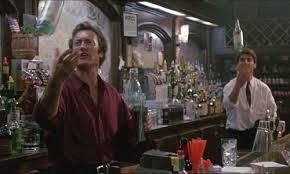 This is a fun movie, mainly because it has multiple acts that feel very different, as if we are watching different movies all rolled into one.

Cocktail is an enjoyable film. It’s a Tom Cruise drama that is cloaked in eighties atmosphere, really revving it up as the mature version of Cocktail. Sure Cruise’s character, Brian Flannagan, is just a kid here and makes tons of stupid mistakes (how many times is going to take a bet from his friend Cogburn, even though he knows the results can end up very badly for him?) Still, it’s the mature version simply because the movie feels like it could actually be real. Between Flannagan’s push to make something of himself in the world of business, to his acceptance of challenges without realizing what the results might be, this is a character who acts first and thinks later. The movie works mainly because the story is so involving. There’s a first act that features Flannagan is the greatest bartender on earth, (not only does he flip bottles all over the place, but he also gets on the bar and recites poems which he wrote himself.) And that’s just the warm-up. From there it’s off to Jamaica, where new characters are introduced and the story really begins. There’s a lot to like about this film, even if the final act ends up heading into cliched territory.  There are some pretty cool twists to accompany it and keep us glued to the screen.

REVIEW:
Cocktail is an eighties Tom Cruise movie featuring the actor at the height of his youthful, energetic power. This is the Cruise young adult counterpart to Top Gun. What I mean by that is, if Top Gun was Cruise as a superhero, taking on fighter jets and the military in coolest and suavest of ways, then Cocktail is the more soapy and subdued version with Cruise going to business school, seducing older women, and dreaming of opening up his own bar. Top Gun was made in 1986 and Cocktail was just two years later. It’s no coincidence that Cruise would go on to headline the Mission Impossible films, a decade later. It’s a series that has run so long and been so successful that it outlasts two different Bonds in two different decades, (Pierce Brosnan and Daniel Craig.)
Cocktail is a movie about a young man, Brian Flanagan, (Cruise,) coming home to New Jersey after serving in the military, and trying to find work. When we first meet him, he’s got the local police helping him chase down a bus. It’s a scene that’s shown from far away, like birds eye view overhead shots, and that’s too bad, because if shot differently so that we could actually follow it better, this could have been a terrific opening. As it is, it’s probably the weakest scene in the movie.
Flannagan finds himself coming home to his Uncle’s local bar, spending some time there, and then turning down a job to work at the joint. The uncle is full of older man wisdom, and he’s a good character, but no answers are given as to why this is Flamnagan’s only family member. Here we have this very young guy, and no information about his parents or upbringing. The movie has a very different plan and no time to sit still and retrace the past.

After his welcome home and catching up, Flannagan goes into the city to look for a job. He does want to work at a bar, just not his Uncle’s deadbeat zone. Instead, he finds a happening spot on the upper east side of Manhattan (a bar that still exists there today, called Bakers Street,) and applies for a job. Flannagan is quickly hired and starts working alongside an older Australian bartender named Cogburn.
The scenes at this bar are the ones that this movie is most well-known for. This is where Flannagan and Cogburn flip bottles and glasses, throw things to each other, and put on a show every night while making drinks. The first night is chaotic, with Flannagan stumbling to catch his breath, and at one point he even calls a waitress a bitch. At another, when a customer asks him for a certain drink, Flannagan asks the man hoe to make it. Luckily things get better after that. Flannagan gets the hang of working in this fast-paced environment, and people start coming there just to watch him snd Cogburn in action.
It isn’t long before the two of them are so good that they have a routine together. From there, they both get recruited to come work at a high end night club, where the bar is like the center stage. Flannagan starts dating a patron there, (Gina Gershon), and standing on the bar reading poems to the crowd. Cogburn bets him that what he’s got going with Gershon won’t last.
It turns out that Cogbutn is right, stealing the girl away from Flannagan himself. This leads to a fight and firing of the boys and it also ends the first half of the movie. The second half starts up in Jamaica where Flannagan has been working for some time, setup at a bar. Clearly a good amount if time has passed. Cogburn shows up, and he also has gone through some changes since the two of them last met. Cogbutn is now married to a hot and wealthy blonde. Flannagan starts seeing a girl named Jordan (Elizabeth Shue) who is on vacation down there.
That’s when Cogburn makes him another bet. As if Flannagan learned nothing from the Gina Gershon situation in Nrw York, Flannagan accepts. The bet by Cogburn is see if Flannagan can land an older woman of money. Flannagan partakes, and once again it ends up costing him. Jordan sees Flannagan pursuing the woman, and hightails it back to New York.
Flannagan is okay with how things worked out, at least at first. This older woman he’s with seems like someone who will help get him connected in the business world. He moves back to New York with her and is all ready to go in and meet with her friends to talk about his ideas. Only she has other plans, and Flannagan quickly realized that he is merely a play thing. He feels like he’s being used like a dog, and this is made painfully obvious at an art gallery party when she never even introduces him to her friends.
There are some nice surprises left for the final portions of the film. Mainly one involving Cogburn. The movie does start to feel a little cliched with the story between Flannagan and Jordan, which unfolds further in the final act. We’ve seen the story of characters from different worlds before, and this one brings in Jordan’s upper-class father, as if it wants to be a take on Romeo and Juliet. The result ends up being the weakest portion of the film (well, other than that bus chasing opening scene.) Still, the movie works in so many other ways that it is easily forgiveable. What’s great about this film as how there are three or four acts and each of them feels incredibly different. It’s like watching four different movies. There’s Flannagan as a bartender making it big with Cogburn. Then there’s Flannagan in Jamaica dealing with the conflict between Cogburn’s bet and Jordan, the woman he really likes. After that it’s Flannagan and the wealthly woman who is using him. And then finally, it’s Jordan and the class issues involving her father trying to buy Flannagan off. There’s a lot here, and the effort is so tremendous that even when some of it doesn’t work, the rest of it is more than enough to keep us interested.