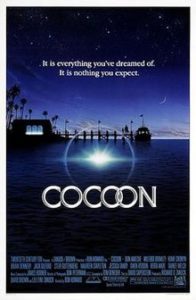 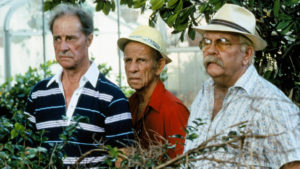 A pretty creative and unique movie that uses the aliens coming to earth premise to explore the impact on the elderly and a sort of fountain of youth.

The effects don’t hold up, but nearly everything else about this movie works. It’s the story of the residents at an old age home who discover that a local pool where they secretly go swimming, is filled with powers that make them feel youthful again. The characters are a trio of men who are trespassing when they come to this pool, and we also meet the characters who own the place and learn about their agenda. Let’s just say this movie isn’t above bringing in aliens, and doesn’t exactly do a great job of hiding what they are all about. The best alien movies are the ones that don’t tell us too much, and ask us to buy into it all. This movie was made at a time before rules like that were figured out. This one is from the Close Encounters and E.T. time, and it does something pretty smart with the aliens by making them into characters who are more friends than enemies. The whole thing leads to some pretty unpredictable and clever situations.

Cocoon tells the story of an old age home where the residents discover a secret about a nearby, abandoned pool. There are three residents in particular who discover this, as the trio of men sneak off during the days to get some time to themselves in the luxurious spa atmosphere. And the pool is actually a version of the fountain of youth. They don’t de-age and become younger, or anything like that, but they certainly act it. These guys get the energy of youngsters and in the case of one of them, who is terminally ill, the pool swimming completely reverses and eliminates his sickness, making him healthy again.

This is a pretty cool idea for a movie. Especially considering how simple it is. When you hear the title, Cocoon, and know it’s about old people in the pool, the natural assumption is that these old people start sleeping in the cocoons, or something like that, to get their youth back. No such thing. This movie is much smarter and classier than that. But what it doesn’t do so well is handle its alien story. When it comes to aliens, the less we know, and the less the movie tells us the better. Since aliens don’t really exist, (or since we don’t have knowledge of them, anyway,) it’s best to keep the information about them a mystery. Less is more. That’s what the alien monster movie A Quiet Place showed us. We don’t need to know where the aliens came from or how they got here, or anything about their backstory. All we need to know is that they are here, and what they are capable of now. But Cocoon, like many other alien films, isn’t aware of these rules, and so it overplays its hand, when it comes to the aliens.

Luckily, however, much more prevalent than the alien story in this film is the human story. There are those three old men who sneak around, Art (Don Ameche), Ben (Wilford Brimley), and Joe (Hume Cronyn.) We meet them early on, in the old age home, going for walks and doing activities together. Art and Ben walk through the home with more energy than most of the people there, but they see things like a dance class of women with no men, (because men generally die earlier than women,) and a room where a person is dying, as doctors rush in to try to revive the person. We also meet Ben’s nephew, a young boy who loves spending time with his grandpa, so much so that he knows his grandpa’s schedule of where the man will be on each day. Thursday means the shuffle board courts.

The three men sneak into the pool and have a field day. And they keep it a secret from everyone else. Then one day, they are heading over there with Ben’s nephew, all excited about going for a swim, and are shocked to see that the pool is being bought by a businessman, names Walter, (Brian Dennehey.) This actually is not our first time seeing Walter in the movie. Over by the docks, we are introduced to some more youthful characters, in a move that seems like the movie didn’t want to have it’s entire cast be old folks. We meet Jack (Steve Guttenberg,) the captain of a boat that has to pay more to the owner of a dock to keep his boat tied up there, than he makes each day by going out to sea. Jack is the comic relief in this film, and with Guttenberg, they definitely found the right guy.

He’s the character who really introduces us to Walter. It’s after one of these dealings with the owner of the docks, when Jack is really hurting financially, that Walter comes aboard and offers Jack a deal. He wants to rent Jack’s boat for thirty plus days. He and his crew of researchers. They want Jack to be their driver and guide, getting them to the exact parts of the ocean where they want to go. Jack gladly agrees. Especially when he sees Kitty, the attractive young woman who is a part of Walter’s crew, and will be coming along. And so, Jack drives Walter and his crew out to sea, where they go diving underwater and bring these mysterious items onto the ship, wrapped up in such a way that neither Jack now the audience can really see what they are.

But we see them back at the pool, when Walter and his team bring them there, open the wrapping, and expose these giant cocoons. They leave them inside the pool, underwater. And one day, Art, Ben, and Joe come upon this. They don’t care that there are cocoons in there, and go jumping in anyway. And suddenly they start feeling amazing. We get a montage of the old men doing all kinds of dives, jumps, and flips off the diving board. They look like a bunch of teenagers doing these things. Clearly whatever is in the water has invigorated then, and they even make a joke about it, wondering if the water is filled with cocaine. These guys go home and discussed the condition they are in below the belt, (basically they are all hard as rocks.) And then these men go home and make love to their wives. We see all of this and it is played nicely for comedy.

Then one day, something happens. It happens on the ship first, with Jack. He’s spying on Kitty,  being a peeping tom as she takes off her clothes. But then she takes off something else. Her human skin. Suddenly a bright white, glowing and shining alien is standing in front of him, and she notices Jack through the peephole. He runs up to the deck and grabs a blowtorch for protection, but Walter and his crew surround him and explain to Jack that they know what he saw, and they still want him to give them a chance. They may look scary, but they mean him no harm. Back at the pool, something similar happens. The guys are swimming one day when Walter’s crew arrives, and the guys hide in a closet. That’s when they witness the aliens for themselves.

The thing that makes this movie unique is that from here, both sets of human characters, (Jack on the boat and Ben and his crew by the pool,) end up becoming friends with the aliens. In the case of Jack, it’s about needing the money, and in the case of Ben, it’s about helping his friend, Joe, whose sickness comes back. The scene where Joe goes back to the pool, after being caught by Walter’s crew and then calling the police to report the aliens, is great. With his tail between his legs, Joe goes to see Walter and basically ask for forgiveness. He asks to use the pool and Walter agrees, so long as they don’t touch the cocoons.

And then some pretty interesting things start to happen in the second half. The guy who they brought over to the pool one day, who refused to go in, (he was the lookout who caught Walter’s crew coming back, and was there when they saw the aliens,) now rats them out to the entire old age home. And suddenly residents are running to the pool in droves, like a stampede. They all get in and tear the place apart, grabbing the cocoons out of the water and banging them around. Walter arrives and sees all this and yells at the people for trespassing. But the damage is done, and the water no longer has its powers.

That leads to an ending that’s a little too crazy and extreme. Understandably the climax has to be the biggest part of the movie and has to show us things that we haven’t seen yet in the film. In the case of alien movies, it has to show us the ship or the planet or something big and new. Think about the endings of Close Encounters of the Third Kind or Fire in the Sky. But this movie does something that Close Encounters did, which is that it ends in such a way that completely throws the notion of a circular ending out the window. The circular ending idea is that characters go back to where they were at the beginning, at the end of a film. Whatever job they were working at, they are back to it at the end. The strange thing that happened to them, during the course of the movie, is gone. To some extent that’s true here, but most certainly these characters, and their future is not the same. But breaking the mold is actually a good thing, and the ending might be a little too extreme, (especially with the ridiculous part the kid plays in it,) but it’s still kind of fun. This is a pretty good movie with some clever ideas. The effects don’t really hold up and aren’t even close to what we could do today, and you have to wish they used costumes and makeup for the aliens instead of their version of computer effects (which really do look like cartoon drawings,) from back then. But even still, the story is pretty good, and it takes some pretty creative twists and turns.