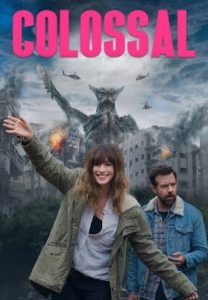 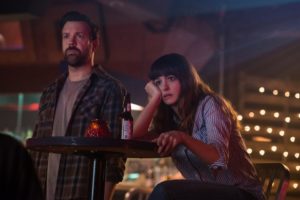 A fantastically original and creative movie, this one is at times more of a suspenseful drama than it is a monster movie. Consider the monster movie stuff just a bonus!

Here is a movie that is truly original and creative. Not just in the out-there plot that it shows audiences in the trailer, (a woman realizes that she is in control of a Kaiju monster on the other side of the world,) but in the dramatic storyline that makes up the heart of the film. This isn’t a movie about monsters. It’s a movie about two people in a very dark relationship that crosses friendship with abuse. And the darker it gets the more surprising it gets. You see any movie with giant monsters in it, right away screams comedy or action movie. And yes there are elements of those in here, but mainly this is s drama. Our protagonist is an alcoholic trying to recover her life, and the characters she comes across don’t exactly make it any easier to do. This is a movie that surprises us st every turn and never allows itself to fall into one of the usual traps or cliches. This one is something special.

Colossal is an extremely impressive film. It’s one of the rare movies that truly combines sci-fi with drama to the extent that, for much of the movie, you feel like you are watching a suspenseful drama about angry and abusive people. You forget that there is a monster storyline looming in the background. And the movie accomplishes this goal, of succeeding on multiple levels in multiple genres by staying ahead of us and shocking us with the directions of where it goes. Whatever you think this movie is and has got to be, because of the genre it’s in, it is most definitely not.

The surprises aren’t just twists, but more like genre bending ideals. With a premise like this, (about giant monsters that are controlled by people,) right away you think it’s got to be a comedy or an action movie or both. What you don’t think is dark and disturbing drama. And that’s exactly why this movie works so well. All the ways that you think this movie could let you down, (and there’s a lot,) well, none of them actually happen. So you think maybe this will turn into  romantic comedy between its two good-looking and charming leads. It doesn’t. And you think that maybe there’s a dramatic explanation behind these monsters, like that Gloria (Anne Hathaway, playing an alcoholic,) did something terrible, like ran a kid over at this site when she was younger, or something, and has suppressed the memory. Nope. Whatever cliched paths this movie could have taken, it absolutely makes sure to avoid them. And that really works for both surprising and staying ahead of the viewer.

At the start of the film, we meet Gloria while she is being broken up with and kicked out of her New York City apartment by her boyfriend, Tim (Dan Stevens.) He doesn’t seem like a bad guy, but like someone who is just fed up with her to the point where he can’t take the lying anymore. And even as Tim leaves the apartment, for Gloria to pack her things up and move out, we see that she had friends just waiting for him to leave, sitting in a car outside the apartment, so they can run in and party. Gloria’s life is out of control,  (the opening conversation is her telling a story about partying and not knowing who she was talking to or what was actually happening,) and she needs a change. It should be noted that one of Hathaway’s strongest performances (if not her very best,) was in the drama Rachel Getting Married, where she also played an alcoholic in an unusual movie. These are clearly the kinds of films where she does her best work.

Here, Gloria ends up moving back in to a house in the town where she grew up. Apparently her parents are no longer there, but the house is still in their name. So she is able to move in and live there, even though there isn’t any furniture. While it might have been nice to learn more about the parents and what happened to them, the movie doesn’t try to hide Gloria’s living situation by spending all of her time at the bar or playground. Instead, her empty home and how it gets filled during the course of the movie, becomes an important element of the plot here. Especially since it’s her childhood friend, Oscar (Jason Sudeikis,) who keeps bringing her things to fill the apartment with.

Oscar owns and operates a bar that was once owned by his father. We learn that Oscar’s parents have both passed on, and he is thrilled that Gloria has moved back to town, thinking that she will add some color to his otherwise empty and dull life. Right away, Oscar offers her a job working at the bar. He seems like the nicest guy in the world and we think this is thing is destined to head into romantic comedy territory. We couldn’t be more wrong. The first clue that something weird is going on happens when Oscar introduces Gloria to his two friends, Joel, (Austin Stowell,) and Garth, (Timothy Blake Nelson.) Gloria and Joel hit it off, and at one point are about to exchange a kiss when Oscar walks in and gets angry at Joel. We assume it’s that Oscar has feelings for Gloria and that maybe Joel has done some bad things in the past, (like stolen a girl away from Oscar or something.) As it happens, it’s some foreshadowing of what’s to come.

Regarding the Kai Ju storyline, (the name we learned from Pacific Rim, which stands for giant Godzilla-like monsters that walk through cities in Asia,) Gloria wakes up one afternoon that a giant monster has attacked Seoul, South Korea. She calls Tim to talk to him about this, and he can’t believe she’s just finding out. Apparently it happened many hours ago. Gloria goes to the bar where everyone is watching news footage on the giant TVs. It’s the talk of the town, and the next time there’s a Kai Ju attack, Gloria notices that the monster is doing the same sort of things (a scratching his head pose,) that she does.

Now Gloria starts doing experiments to see if this hunch she has, that she is somehow connected to the monster, is true. She goes to the playground, where she was during the time of the first attack, and raises her hand in a strange way. Sure enough, when she gets home and checks the news, the monster materialized over Seoul at the same time she was in the playground, and did the exact same hand gesture as her. And Gloria is super concerned. She’s freaked out and doesn’t know what to do. That’s when she brings Oscar and his friends to the playground to see for themselves. And the way she shows them is fantastic. She points them to a website where they can watch live footage, and then dances around in a certain way, calling their attention to not only how the monster is dancing, but also how she is dancing. And now comes the issue of what is to be done. Gloria can’t believe that she is killing people with this. The simple solution would be to stay out of the playground, but the movie comes up with a reason why that isn’t the be all and end all to her problem. Let’s just say there’s a twist at about the midpoint of the film, which involves one of the other characters and a new wrinkle in the monster situation.

And then there’s the story away from the monster. Characters are not who we thought they were, and turn out to shock us with the direction their storylines go. The three friends who hang out at the bar drinking all the time turn out to not be as cool with each other as we might have thought. And while they are working out their problems, (and believe me, they are not so simple,) Gloria is debating whether or not she should go to the authorities. She feels terrible about being in some way to blame for this creature that is randomly killing people, and she doesn’t know what it means or how to stop it.

There’s so much more to this than what has been said so far. In an effort to avoid spoilers, I won’t go any further with explaining how dark this movie gets in terms of character, except to say this… in all romantic comedies and light, fluffy movies, the characters have a conflict or tiff with each other, and then end up resolving it and making up. In this movie, the conflict is much more real and much more serious than that. Remember, this is the movie that defies cliches by going against them. It’s a breath of fresh air to see a movie that is not afraid to take major chances.

There are so many ways that this movie works. The final solution is cool and creative. The monster storyline is an original take on these Kaiju creatures, and what could be the cause. The character storylines go to places that we never saw coming. And even the little details in  this movie are well-crafted and interesting. Like the way that Oscar’s bar used to have a backroom, back when Gloria and Oscar were younger, and how now that room is just used for storage. We get to see the details of Gloria blowing up an air mattress and of Oscar telling a story about the most dangerous firework around. And all this is actually compelling. There’s a reason why we want to watch Gloria blow up an air mattress, and its because the monster storyline is so crazy, that want some simple scenes of daily tasks to help ground this movie in reality. We get there here. And a whole lot more. This movie really delivers.