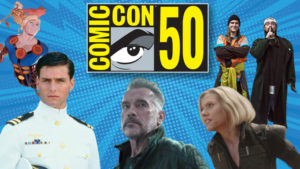 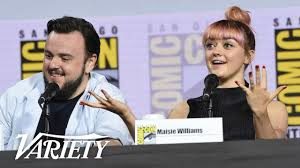 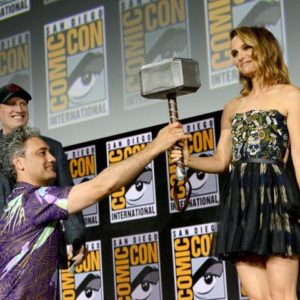 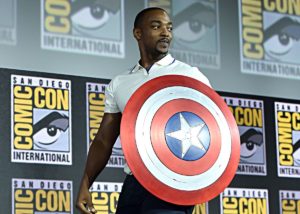 Comic Con 2019. This was a strange one. It all unfolded during the course of three days, and basically only went all out o the third, and final day. That was Saturday. That was Marvel’s Day. There were big things before that, (mainly on Thursday,) but nothing truly special. And then Saturday came, and it wad all out. Here’s the rundown of how it all went.

Paramount began with a Terminator Dark Fate Panel, with Arnold and Linda Hamilton on hand to talk about the movie with director Tim Miller (Deadpool.) There was a behind the scenes reel, featuring movie clips and interviews, (including James Cameron.) And it definitely conveyed a very specific message. That message is that this movie is the direct follow up to Terminator 2. So it will be supposing that all those other Terminator movies that we have gotten since then, (three other ones,) did not exist. The way it is presenting that message is by brining back Linda Hamilton, (one of the two main stars of the first two Terminator movies,) bringing back Arnold, (which isn’t saying much, since he’s been in all but one movie, Salvation,) and even bringing back Edward Furlong, (most likely in just a quick cameo appearance.) Aside from those cast announcements, another big revelation is that this movie will be rated R, like the original two films. Most of the Terminator movies that have come afterwards were not. The interview reel really worked hard to make that point clear, and that means nearly everyone interviewed was cursing up a storm to prove a point. It all sounds intriguing. The only thing that would have made it better would be if Cameron was directing himself.

And then, Paramount brought out a Top Gun 2: Maverick trailer. This thing looks great. Or at least, it’s got a great trailer. Talk about nostalgic, this one is all about making us feel like we are back there, in the first movie. The shots, including a volleyball game, feel right out of the first one. And the music is spot on. So that’s two movies by Paramount that are all about m

aking people nostalgic for films of the past, while offering up a new kind of sequels.

Other movies that had trailers drop on Thursday included Cats and It: Chapter 2. Neither one was especially impressive. Cats looks interesting, but it also looks very creepy and weird. And seeing Jennifer Hudson belt out those songs just makes me wish I was watching Dreamgirls again. But I guess we’ll have to see. And It: Chapter 2, I could honestly care less about. People thought the first movie was great, but it really wasn’t. It relied so heavily on computer effects that the scares weren’t believable or scary at all. And there’s no reason to think this sequel will be any different.

And then came Friday…

This was a day that was more about the past than the future. Other than a 21 Bridges Trailer, (the new Chadwick Boseman thriller,) this one was all about looking at content from the past and discussing it.

Three months ago, at the end of April, the two biggest conversation pieces in pop culture were Avengers: Endgame and Game of Thrones. I remember the same weekend that Endgame opened in theaters, it was the Long Night episode of Game of Thrones, also known as The Battle of Winterfell. It promised to be the best episode of the season. That was one hell of a weekend.

Well, now both Avengers Endgame and Game of Thrones had panels, on Thursday, to discuss what audiences had already seen. In the case of Game of Thrones, there were all sorts of problems, (not just wait the season, but with the panel too.) In the case of Endgame, they went all out and did different rounds. So the writers came up and spoke first, and then the directors came up afterwards. Things did not go so smoothly for Game of Thrones.

The big reason why people were anticipating this panel, was because David Benioff and Dan Weiss, the creators of the HBO sows were going to be there. These two hasn’t broken their silence about the show, every since it e

Game of Thrones cast, no creators, no fan questions

(May 1st, 2020) Black Widow,, featuring Scarlet Johansen, David Harbour, and Rachel Weisz. Scaret Johansen was there to talk to the crowd. Showed some footage, a sort of trailer, opened with a title card that said “Budapest,” something that has been referenced again and again by Widow in the MCU movies. (Does that mean Jeremy Renner is in the movie too? Probably.)

(Feb 12, 2021) Shang Chi and the Legend of the Ten Rings, featuring Tony Leung as the Mandarin

(May 7th, 2021) Doctor Strange and the Multiverse of Madness (March 7th, 2021,) and will costar Elizabeth Olsen as Scarlet Witch, director Scott Derickson was there to talk about it and promised to make the first scary movie in the MCU.

(Nov 5th, 2021) Thor: Love and Thunder, starring Chris Hemsworth, Tess Thompson, and Natalie Portman. Directed by Taika Watiti, (Thor: Ragnorak,) the movie will feature Portman taking over the role of Thor, and wielding the hammer. Valkyrie will be Marvel’s first LGBTQ character, as she seeks out a Queen to rule alongside her.

Finally, Kevin Feige announced that The Fantastic Four and The Mutant will be coming to the MCU in phase 4. “The Mutants,” he is referring to are The X Men.

(Fall 2020) The Falcon and The Winter Soldier

(Spring 2021) Loki, Disney Plus series, Spring 2021, to pick up after Loki snatched the Space Stone in Avengers Endgame, continuing on an alternate timeline, Tom Hiddleston on the panel

(Spring 2021) Wanda Visions Panel, Disney Plus Streaming Show, Spring 2021, Kevin Feige, Elizabeth Olsen, and Paul Bettany on the panel. The show will also feature an adult version of the best friend’s daughter of Carol Danvers (Captain Marvel,) who we met as a kid in the movie.

(Summer 2021) Marvel’s What If, an animated series on Disney Plus, in Summer 2021,  featuring alternate storylines for events that happened in the MCU, but here’s the catch, tons of the original stars are voicing their animated counterparts. Here are the stars signed on… Michael B. Jordan as Killmonger, Sebastian Stan as Bucky Barnes, Josh Brolin as Thanos, Mark Ruffalo as Bruce Banner/The Hulk, Tom Hiddleston as Loki, Samuel L. Jackson as Nick Fury, Chris Hemsworth as Thor, Hayley Atwell as Agent Peggy Carter, Chadwick Boseman as Black Panther, Karen Gillan as Nebula, Jeremy Renner as Hawkeye, Paul Rudd as Ant-Man, Michael Douglas as Hank Pym, Neal McDonough as Dum Dum Dugan, Dominic Cooper as Howard Stark, Sean Gunn as Kraglin, Natalie Portman as Jane Foster, Taika Waititi as Korg, Toby Jones as Arnim Zola, Djimon Hounsou as Korath, Jeff Goldblum as Grandmaster, and Michael Rooker as Yondu. The episodes will be hosted by Jeffrey Wright playing a character named The Watcher, and he was on hand to be interviewed for a panel.

(Fall 2021) Hawkeye series, Fall of 2021, Jeremy Renner was there to speak about the show which will be about him mentoring Kate Bishop as the new Hawkeye

So, it looks like Marvel is reducing their movie amount, (notice no room for Black Panther 2 just yet,) in order to focus quite a bit on the streaming shows. And this might turn out to be a very good thing. For one, the market is too oversaturated right now, and absence makes the heart grow fonder. Let’s put it this way… when Marvel released an Ant Man sequel just months after Infinity War, it did very little business, because how do compete with a movie that featured all the heroes by releasing a movie that deals with just one? So by taking about a year off, people will be super excited for Black Widow, the first movie in a long time to have any connection to Marvel.

I also like that phase 4 is really just two years. 2020 and 2021. So it won’t be long before we do get a Black Panther 2 announcement, as well as some more news about the Blade movie and Fantastic Four. At this point, I’m just wondering when we’ll see the Avengers again. That one might definitely take a while, and the longer they wait, the more we will crave it.