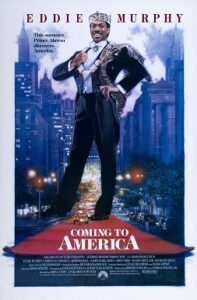 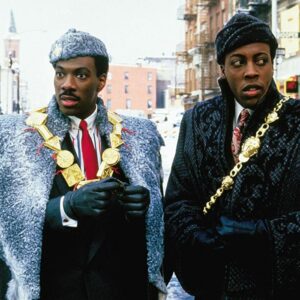 A classic fish-out-water romantic comedy, this is one of those late eighties movies that brought black comedies into the mainstream, in large part because of how smart and funny it was.

Coming to America is a classic Eddie Murphy movie. In fact, it might very well be the most classic Eddie Murphy movie there ever was. Murphy had other breakout films before this, like 48 Hours and Trading Places, but he was a co-star in both of those films. He also had the movie Beverly Hills Cop, which was a little more in the right direction. Murphy was the star of that movie and it did spawn a trilogy, but it was also a movie about the oddball and eccentric black cop surrounded by a sea of white superiors. Coming to America is something different. Not only is Murphy the star, but it’s also a movie with nearly an all black cast. That means something today, and it definitely meant something in 1988 when it was one of the first of its kind, (to put things into perspective, Spike Lee’s Do The Right Thing, which featured an Italian family as much as the black characters, wasn’t made until the following year, 1989.)

Coming to America is the story of an African Prince who is tired of living a life of royalty. Especially when it comes to areas like doing things for himself and choosing a wife. The opening scenes of the movie show Prince Akeem (Murphy,) being pampered in every way possible from the moment he wakes up, (violinists above his bed playing a gentle, calming song,) to bathing, brushing his teeth, and even wiping him when he goes to the bathroom. Each of these ideas is funny in its own way. There are even three women who throw rose petals at his feet before he walks anywhere. And Akeem has had enough.

He tries to talk to his parents about it at the breakfast table (a massively long table, where the only way Akeem at one end can interact with his parents at the other, is through intercom.) His father, King Jaffey Joffer’s, (James Earl Jones,) takeaway is to get rid of the women who throw roses at Akeem’s feet. This leads us to a sparring session between Akeem and his best friend / assistant, Semi (Arsenio Hall,) in which Akeem argues his point with a man who thinks Akeem is just being ungrateful. But Akeem wants a woman who will have thoughts and opinions of her own, and he thinks intelligence in a woman should be valued.

That leads us to the royal ceremony where Akeem is to meet his future bride. This is the one sequence of the movie that feels a little too long, especially with the elaborate dance number that takes place before we even meet the woman. When she finally does emerge from the crowd, Akeem takes her into a private room to try and converse with her. And that doesn’t go especially well. Let’s just say it ends with her barking like a dog and hopping on one foot. And now Akeem tells his father he needs to go to America and to get some experience of his own.

Similarly to how King Joffer didn’t understand the breakfast table complaint, and took it to mean no more rose petals, the King doesn’t really get this one either. He thinks Akeem is going to America to “sew his royal oats,” or to get the fun out of his system before he settles down with this bride that has been chosen for him. It turns out, Akeem is really going because he is looking for a bride. He and Semi ask where they should go to find a Queen, then look at a map of New York and decide on Queens. And just like that, they are off.

Now the movie changes location and path. It is no longer about Akeem being tired of the royal treatment, and instead is focused on Akeem finding a woman who will be his Queen. Considering this guy had never done a single thing on his own, a scene of him on a plane for the first time might have been nice (stowing his luggage overhead, dealing with the tiny airplane bathrooms.) But other than that, the movie covers everything, including walking through the airport, hailing a cab, and finding an apartment to rent. And now he’s all settled in New York, and needs to find a girl. They try going to a club and meet a whole bunch of funny women, each odd and funny in her own way. But none seem right. Akeem and Semi go to the barbershop and the barber (also played by Murphy,) tells them to go to a Church function if they want to meet a nice wholesome girl.

That’s where Akeem first sees Lisa. She gets on stage to make a speech about the children and help get donations that will go to a good cause. We also meet some of the people in her life here, including her father, who own MacDowels, (a take on McDonalds,) and Lisa’s boyfriend, Darryl. MacDowels is a hilarious concept, mainly because it constantly acknowledges McDonalds. Instead of just being a spoof on the real life location, this movie exists in a place where both MacDowels and McDonalds exist, and Lisa’s father talks about the differences between them, as well as how MacDonalds is suing him. “They have the Golden Arches, we have the golden arcs.”

Akeem and Semi both end up getting jobs at MacDowels, cleaning up and mopping the floors. For Akeem, this is a chance to meet Lisa, and he comes into her office one day, and awkwardly introduces himself. From there, it’s about slowly getting his foot in the door. This includes going to a basketball game with her, Darryl, and her sister, taking out a robber in the restaurant, and bartending at one of her fathers parties. Now, Darryl (played by ERs Eriq La Salle,  is a real jerk of a boyfriend. He makes fun of Akeem for being from Africa during the basketball game, takes credit for a donation that Akeem made when a Lisa asks him about it, and then tells her father that he proposed to her and she said yes, when that never really happened. That’s the cherry on the cake, and the final straw for her.

It’s Akeem who is right there to catch Lisa when she falls. He’s a shoulder to cry on, and turns that into a whole lot more. And just when things are starting to look up with her, and get to where Akeem has always hoped they could go, a new problem arises. It’s the serval of the royal family in America, coming here in response to a letter for more money that Semi sent. It all fits perfectly, since we saw Semi at the bank sending the letter doc even reviewed how the letter sounded with him and the telegram sender. But now, the royal families arrival brings a whole new set of problems. Akeem’s secret is revealed, and Lisa is not exactly happy.

There is an awesome endless supply of reasons why this movie is great. Murphy and Arsenio Hall’s list of additional characters that they play, including members of the barber shop, a preacher, and a singer, are just a few. So is the fact that Murphy finally gets the chance to play the straight man, and not the eccentric, and he knocks it out of the park. And then the story, which might have some cliches areas from time to time (the jerk boyfriend, antagonist,) but for the most part is pretty creative. Escaping royalty to diguise onself as a commoner hasn’t been used as often as one might think. Princess Jasmine in Aladdin is one such example, and that’s only a small part of the film. Here, Murphy and team behind this movie, including director Jonathan Landis (Trading Places,) take this seemingly ordinary plot and spin it into something spectacular. The result is a memorable, nostalgic, and overall excellent movie.