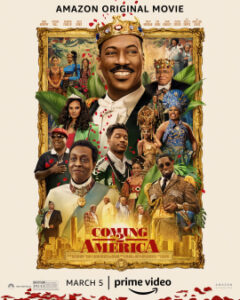 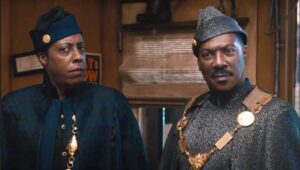 Packed with references to the first movie, throughout the entire film, this one has a decent plot of its own and is a fine sequel.

With more references and Easter Eggs to the first movie than anyone could possibly imagine, this sequel manages to pull that off while also having a story of its own. The story gets creative from time to time, as it deals with the discovery of a new son and some competition dealing with who will take over someday for King Akeem (Eddie Murphy,) but then it also repeats itself quite a bit. And the humor isn’t nearly as funny as it should be, making this movie just an okay experience.

Coming 2 America, the sequel to the 1988 classic Eddie Murphy is not really all that good. It’s okay, to be sure. Just being in this world again and seeing these characters once more is a treat. But as a movie in its own, this one doesn’t quite have what it takes. It doesn’t have it with story and it most certainly doesn’t have it with humor. To be fair, the story is okay. It’s not bad. All things considered, they did what they could with taking elements from the original movie and reworking them, while at the same time not doing the exact same thing all over again. And they got a lot of bang for their buck as far as stuffing this one with as much as they could.  There’s a lot going on, including two trips to Zumunda (the fictional country that Eddie Murphy’s character, Akeem, is the ruler of,) and two trips to New York.

The movie includes more references and call backs and Easter Eggs to the original film than anyone might have imagined. From the opening scenes to the last, there are so many references, including photos and one-liners, and quick moments of things that characters do. From the Paramount logo mountain zoom in, to the opening sequence that leads up to Akeem (Eddie Murphy,) and his wife, Lisa being woken up, (the exact same way the first movie began,) this one is all about the references. In the first movie, “Yes, it is my birthday,” turns into “Yes, it is our anniversary,” here. And the references are just beginning. We see every additional character that Murphy and Arsenio Hall played return. We see two different sequences from the first movie replayed, one from a new angle and another as a montage. And as far as Easter Eggs, they are all over the place, from the portrait of the Dukes (which goes all the way back to the movie Trading Places,) to the woman who was supposed to marry Akeem in the first movie, and is still hopping up and down, barking like a dog, to this day. We even get call backs at the end of the movie to exact lines of dialogue from the first film (“You sweat on a baboons balls,” and “Are you sure you don’t want to give all this up?”)

As far as story, this movie does end up repeating a major idea from the first film, about a man who does not want to marry a woman who has no opinions of her own, and instead wants to marry for love. But the positive is that this movie has a lot more going on than just that. In fact, that idea is just one of the many things going on here, and doesn’t even make an appearance until the second half of the film, (whereas in the first movie, it was the predominant storyline.)Instead, this movie has a new story to tell, about a new revelation that comes across Akeem’s way, and the consequences that result from it. But first, we get all of the introductions, including Akeem’s three daughters sparring with him (much like Semi sparring with him in the first movie,) and a visit to Zamunda MacDowels (the rat burger humor doesn’t work, even though it’s nice to see Louis Anderson back again.)

After the introductions are done, the actual story begins. Akeem gets a visit from A General of a neighboring country called Nextdoria (is that supposed to be a funny play on words, because it’s really more lazy than funny.) The General is played by Wesley Snipes, who is actually pretty good here. In fact, some of the actors who weren’t in the first movie are actually the better parts of this film. We’re talking about Snipes, Tracey Morgan, and best of all, Jermaine Fowler, who plays Lavelle Junson, Akeem’s son. Speaking of that character, he is basically the main plot of the movie. Akeem learns from his father, and his father’s advisor (played by Arsenio Hall, bringing us a new character that the actor did not play in the first film.) Learning that he has a son is important because the rule is that after he is no longer king, Akeem must pass on the rulership of the country to a male heir. And right now, Akeem only has three daughters.

The way the movie shows us that Akeem has a son, and also gives us a call back to a scene in the first movie is very creative. In fact it might be the best thing about the entire movie. It was the night when Akeem and Semi went to a club, in that first film, and sat down at a table with a ton of different girls. Here, we see that they actually picked up two girls that night and brought them home, and that Akeem ended up sleeping with one of them. He didn’t know it or remember it, because he smoked lots of pot that night, and imagined he was being rammed by a boar. When he woke up, he thought the whole thing was a dream. The clever part here is that the movie actually goes back into that scene from the original movie, and shows us a new angle on what was happening. As it happens, this scene is actually the reason why the movie got made. Murphy was watching a movie that used de-aging technology to make an actor look like his younger self,  and suddenly realized they could use it here to show the actors looking the way they once did, and show a scene from the original film, in a new light.

After learning about the son, Akeem and Semi decided to go to New York to find the boy. And of course their first stop is their old neighborhood, and the barbershop. There, they see the four old men who hang out at the shop (at least two of them are barbers,) from the first movie. Three of the four of these guys are played by Murphy and Arsenio Hall. And of course the barbers recognize the picture of Junson and know exactly where he can be found. Now this is a little ridiculous. Later on in the movie, (the next time Akeem visits New York,) he shows up at the barbershop again, and again the guys know exactly where Junson can be found. So now Akeem and Semi go to find the boy, and they come across him outside of Madison Square Garden, scalping tickets. At that point, they go to Junson’s apartment, meet his family, and then head back with both Junson and his mother, (played by Leslie Jones,,) to Zamunda.

At this point we get our second courting of Akeem’s child by Wesley Snipes’ General. First, it was The General bringing his son to Akeem, so that Akeem would consider marrying his daughter off to this boy, should his daughter become the Queen. Then, after learning that Akeem has a son, the General brings in his daughter to meet the boy, and hopefully marry him. And at first, Junson is all for it. After all, this woman is beautiful and palace life seems very agreeable. But then Junson starts to realize that he wants a woman who can actually think for herself and can challenge him. This is where the movie becomes just like the original. In fact, that was the exact plot of the first movie. Akeem didn’t want a bride whose answers to every question were “whatever you like,” and “whatever food you like.” He wanted a woman who would have her own opinions and ideas. Junson feels the same way.

This is where the movie really starts to get repetitive. Not just of the first movie, but also of itself. First of all, you have the passing of one king to another (James Earl Jones’ King Jaffey Jaffer to Akeem,) and at the same time, you have Akeem worried about who will take over after him. He just became King. How about he enjoys it for a little before having to figure out who will replace him after he dies too? Then there’s the idea of going back and forth from Zamunda to America then back to Zamunda. Next, we have the two courtships of Akeem’s children, both by the General. The movie doesn’t actually start to feel creative until Junson’s barber gives him some advice, telling him “don’t be the Prince of Zamunda, be the Prince from Queens.” That leads Junson to start doing things his way, including bringing his Uncle Remus (Morgan,) to Zamunda.

We get a nice montage of the events from the first movie as Junson’s barber tells him the story of Akeem, and we get to watch clips of the original story, with Akeem courting Lisa, back in that 1989 film. And then, when Junson hears Akeem and General Izzi talking during the engagement party, he decides its time to bail. He doesn’t want to be a “pawn,” being married off just to make things better between these two kingdoms that he never even heard of before. More importantly, he doesn’t want to marry a woman who he has no connection with. And so he leaves for New York. Which means we are going back to New York again, as Akeem returns to hunt down his son once more. Talk about repetitive. On the plus side, a positive element of the story is that there are two competing children of Akeem’s who both want the throne, and that neither one is made to be a villain or jerk at all. That’s a cliche that many movies tend to fall for, and this one nicely avoids. But boy does this story cover the same territory again and again and again.

While the movie does repeat the same ideas at different times, it also tries to cover a pretty huge scope. Giving Akeem two different children who are both contending for the throne and who both to some extent have their own stories opens the doors to lots of possibilities. We get ideas about women-men equality here, first in the concept that women can’t own their own business in Zamunda, and then later about whether or not a woman can take over the throne. We get some decent discussions from time to time, like the one about the movies Barber Shop and Beauty Shop. And we get some humorous rivalries on occasion (the one between Semi and Uncle Remus definitely works.) But there’s also plenty of humor that doesn’t work at all. Leslie Jones, who was so sensational on Saturday Night Live, is more annoying than entertaining here. And the movie really does feel pretty flat until Tracey Morgan arrives in Zamunda. That’s where it gets a new breath of fresh air, not just because of Morgan, but because Junson starts to find his way.