Confessions of a Dangerous Mind **1/2 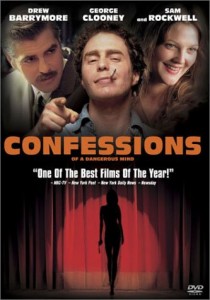 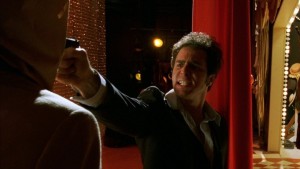 A movie that certainly has an interesting premise, and cool visual style, ends up being more tiring and uneventful than it should have been.

Confessions Of A Dangerous Mind is george clooney’s directoral debut. that will always be what the movie is known for, considering clooney has already gone on to direct so many other films in the decade since. he is cleartly a smart guy who chooses his projects wisely (ever since he went for the money by taking the role of batman in batman and robin, and learned his lesson never to make that mistake again.) clooney might be one of the smartest actors alive, especially when it comes to choosing projects (just like his friends matt damon and brad pitt), but just because his movies are smart, doesn’t always mean they are good. Confessions Of A Dangerous Mind is a perfect example of that.

since batman and robin, nearly 2o years ago, clooney has only made one kind of film. realistic movies. whether he’s playing a lawyer or a criminal or a politician, the movie is always about something that could really happen or did really happen in history. that’s completely fine, except for one thing. sometimes the movie is so focussed on detail and art, that it doesn’t spend time pondering how interesting or entertaining it’s plot is. there are plenty of movies that clooney has made which fall into this category, including solaris and the american. Confessions Of A Dangerous Mind comes pretty close to being another one of those.

the movie should have been tremendous considering the basic premise that it was spun from. a guy becomes the host of a televisions gameshow, called the gong show. at the same time, he is also an assassing working for the c.i.a. it sounds like a hell of a combination. the problem is that neither one of these stories is especially interesting on its own. i suppose the story of the different gameshows that this guy, chuck barris (sam rockwell) took on, is interesting, but only for so long. it’s nice to see the evolution of the dating show game and how barris came up with what is now considered a very generic bachelor show dating game. but there’s only so much that can be done with that before it starts to feel old.

that’s where the c.i.a. story comes in. the cia recruiting agent, jim (clooney), approaches barris, saying that he is the perfect man for the job. jim explains the idea of a profile and how barris’ fits it perfectly. it’s pretty interesting when jim starts revealing secrets he knows about barris, especially when they are ones that barris doesn’t even know about himself. and jim also has a clever idea in the way that barris can have the show send the contestant winners on vacation getaways to locations where he has a hit to take out.

this leads to some pretty funny moments where the two stories cross paths. one has barris handling a hit in a foreign country while the bachelor, who he is chaperoning, is looking all over for him. another scene has the two contestants super excited about winning a weekend geaway, only to suddenly change their facial expressions when they learn of where the location is. it’s in a place where barris has to do a hit, and not in a place that is a sunny, beachy, exotic vacation spot.

the problem is that these moments are all over too quickly and that the movie is basically a series of these small moments. there are lots of characters and lots of snidbits of stories, but no single, ongoing story. and that is the problem. with the cia plot, for example, there should have been one lengthy story about a single target that barris had to take out. instead we just see lots of scenes of him going to his contact person (played by julia roberts), getting targets, and then taking them out. since we are not invested in any of these stories, none of them has any meaning to us.

aside from everything else, the movie jumps back and forth in time, features multiple romantic partners for barris, and has these partners come in and out of his life at different points in time. drew barrymore, for example, keeps appearing and then disappearing and then appearing again. it all becomes very tiresome. there could have been a scene where she was in danger because of someone who was trying to kill him, or something like that. only this movie never gets into that sort of thing.

for a movie about a cia assassin, there is surprisingly little action in this film. i suppose the idea is that he’s a hitman and not an action star, and since he is good at his job, it’s really as simple as just pulling a trigger. but that never stopped jason bourne from getting into all kinds of crazy action situations before, just because he was good at his job. the action is another thing that tends to be missing from large portions of this movie. that’s because clooney was out to make more of an artsy biography piece than an action movie.

luckily somewhere in the later portions of the movie, a single storyline connecting to the c.i.a. plot does start to develop. this story is about a mole in the c.i.a., and how barris has to help figure out who it is. if this story had gone on for more of the film, and been more than just a ten minute situation, it could have made a huge difference. instead, it’s a nice burst of energy, but is too little too late.

Confessions Of A Dangerous Mind is an okay movie. i suppose it’s something different, simply because we have never scene a combination of these two genres before, but that doesn’t always lead to a positive result. another example is abraham lincoln vampire hunter, which seemed promising based on the genres it was attempting to bridge together, but turned out to be pretty lousy. in confessions, if both of the two stories worked, than the movie would have been excellent. unfortunatlely neither one really does. they are both okay, but neither is especially great, and the movie suffers for it. thiis is a somewhat interesting movie, but it is also sometimes pretty slow and uneventful.