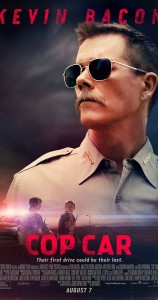 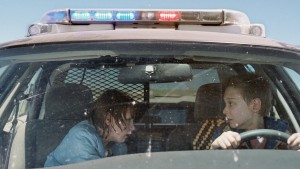 A fantastic gem of a movie that is smart and fun, and also pretty thrilling.

A great movie in all ways other than the final moments, this movie really delivers on nearly all fronts. It’s about two kids who find an abandoned police car and decide to steal it. They are just out there having fun for the day, going on an adventure, like the kind they might like reading about. Only things get way too real when the person who the car belongs to starts coming after them. This man, detective Kresner, (played by Kevin Bacon,) is no happy go lucky guy. In fact the whole reason the car was abandoned by him at the moment when it was stolen, is because he was out doing some dirty work involving corruption and murder. The movie follows both the boys and also Kresner, intercutting between both storylines. The scenes with the boys really get the childhood perspective on this kind of situaiton exactly right. The Kresner scenes show him having to think fast to get out of a number of conflicts. The result is a pretty fantastic film.

Cop Car is a pretty special movie. It’s a film that really takes you into the minds of kids, dealing with a strange situation. That situation involves finding and then stealing a police car. The film was made by director John Watts, the man who saw this movie receive so much acclaim at the Sundance film festival that he was instantly handed another job, and a big one at that. Watts was hired by Marvel to direct their new Spider Man film. Clearly Marvel saw some talent in this guy, and it only takes one viewing of Cop Car to get an idea of what Marvel might have had in mind.

The movie really is about looking at the situation through the point of view of two kids, but it also peels off into the story about the character whose car it is, an evil, murderous, and corrupt police officer.  At the start of the film, we move over empty farm land and hear the sounds of two kids daring each other to say curse words by playing a game where if one of them says it, the other one has to repeat it. The kids are Travis and Harrison. We listen to the progression of the curses and words they come with, and watch as they use this game to challenge each other into saying things that the other one doesn’t want to say. This is very much a kid game, and it also makes for a funny opening. The daring situation is foreshadowing for what will happen later on when the bous find the car.

When the boys do come across a ditch and a hill and then a parked police car at the bottom of the hill, they run and hide behind some tall weeds. Slowly they progress to coming out of the weeds and looking at the car. This becomes another game of chicken. Travis, the boy who was leading the game of cursing dare, earlier on, now has a new proposal. He makes Harrison a deal. If Travis runs down there, and touches the car, and then runs back, then afterwards, Harrison will have to do the same thing. This game leads to the boys discovering that the car is empty.

One thing that is truly beautiful about this movie is that everything moves in small steps. That’s the kid friendly situation, where they examine situations closely before making any moves or decisions. With getting into the car, they check every door before finding the one that is actually opened. Once they get into the car they just sit in it and pretend to be firing guns out the windows, while using their hands as imaginary guns. Even when the boys do start the car, they simply use it to let the car move on its own, in neutral, and then get out and run away before running back to it, and jumping in again.

After the setup is firmly in place, and the boys have not only found the abandoned car, but gotten inside of it and started it, we move to something else. Now we switch over to a flashback of how the car came to be there and why it has been left behind. When the boys found it, there was an empty bottle of root beer left sitting on the hood. Now we see  Sheriff Kretzer (Kevin Bacon,) get out of the car, take his final swig of the root beer, and leave it on the hood. This tells us its a flashback. We watch as Kretzer opens the trunk and pulls a body out of it. There is another body that is also in the trunk and Kresner leaves this second one in there. The first body is of someone who is dead. Kresener takes it out into the woods where he already has a covered up hole, just waiting for him to put a body inside of it. He is about to do this when he realize that the body is missing a shoe. Kresner now goes back to retrace his steps. When he arrives back at the car, he has the surprise of a lifetime, when he sees that the car is not longer there.

We move backt to the story of the boys as they drive around corn fields, speeding along. At one point they need to get through a metal gate, and they use the car to bust through it, only they touch the gas petal ever so slightly and the car barely breaks through the gate, pushing it very slowly until it pops. Seeing their discoveries and fascination with the car is fantastic fun.They try out each of the different sirens, and at one point they have a conversation about the difference gears, noting that P means stop and R means go backwards. When a woman passes by, she sees two kids driving this car, speeding down the highway on the wrong side of the road. Part of her thinks she’s seeing things, but the other part feelsmaybe she should let the police know about this.

What becomes incredibly interesting is watching the conflicts that Kretzer now has to deal with and how he handles them. This is a very resourceful man who knows not only the police system, but also the area he is partolling, very well. When he sees his car has been stolen, Kretzner immediately calls the dispatcher and tells her his radio is down and she needs to contact him on his cell phone from this point on. Then, when he steals another car and gets pulled over because the inspection is not up to date, Kretner comes up with a smart way to get the officer who pulled him aside, to leave. He calls the dispatcher and tells her about a crime that is  being committed just blocks away. Then he listens as the dispatcher sends to call out, and the officer who is standing by his window hear it. With that, the officer lets him go and heads off to pursue the crime that was just sent in over the radio.

Later on, Kresner gets to his own personal car, parked at his house, which has a radio inside of it. This time, he gets on the radio and tells all the officers in the area that there is too much static on this line, and that they should switch to another station. Kretzner even creates some of the static himself, while he is calling in the request. He then listens as one by one, each of the other officer switches stations and announches that they have done this. By getting them off th eline, Krezner now feels like he can speak to the kids about returning the car without anyone else hearing.

A new twist is thrown into the second half of the film when the boys discover the person who has been kidnapped by Kresner and is now locked in the trunk of the car. He is beaten and bloody and this angle suddenly changes everything. Think about this just on a basic story level alone. You find a cop car. You steal the cop car. You learn that there is a body in the trunk, and the person who put it there is now coming after you. It’s so simple, yet also so smart. So is the setup of the climactic showdown, where we watch all of the pieces find their places to take position and wait for the big moment. Unfortunately that big moment isn’t so great, but the setup that leads into it certainly is.

There are some problems with the very end of the film and just how much they leave open and unresolved. Obviously this is intentional, the same way that the ending to the Sopranos television series was intentionally left up to the audience, but in both cases, it really feels kind of lazy. It’s basically telling the audience, “take your best guess at what happened next.” We want an ending, not a guessing game. Other than this, however, the movie is pretty masterful. Kevin Bacon, as the films villain, is pretty terrific. The script is clever and fantastic. It not only gets the story right from the perspective of the boys, but also from that of the man who has had his car stolen and now needs to think fast in order to come up with some plans for getting out of some tight jam ups, that have resulted from this whole thing. It’s a very cool movie.