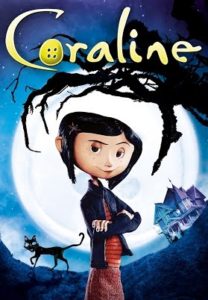 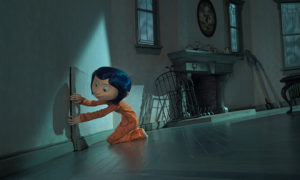 A spooky animated film that is big on wild ideas and a very twisted story.

An incredibly creepy and scary animated movie about a girl who moves to a new house, only to find that there’s a door in a wall that leads to an alternate reality. Coraline goes through the door and meets all different versions of the characters who occupy her real world, including her parents, her friend, and her very strange neighbors. Everything seems perfect at first, but the more Coraline goes in, the more she learns about how horrific this new world really is. By the end, we get all kinds of answers to the mysteries of what happened to other characters, and why there is a doll that looks exactly like Coraline. This movie works as a kind of mind-bending dream and nightmare state. Like Being John Malkovich, the door in the wall is a portal and where it leads to is incredibly creepy and bizarre. From the exploring the old, giant house in the beginning, to the different stages of her understanding of the alternate world, this movie is smart, creative, and incredibly scary.

Think for a moment about some of the most dark and disturbing filmmakers and the movies they have put out there. Guys like David Lynch, David Cronenberg, Darren Aronofsky, and even Guillermo Del Torro. Now imagine one of them had made an animated movie. It would probably amount to something pretty close to Coraline. This is a movie about a girl living in a strange house, with alternate realities, dream states, symbolic creatures, and some incredibly creepy imagery. If you thought the Nightmare Before Christmas was a spooky animated film, just wait until you see the follow up movie from the same director.

No, I’m not talking about Tim Burton. That mastermind filmmaker only wrote The Nightmare Before Christmas. He didn’t direct it. The man who actually directed it, Henry Selick, went on to make Coraline afterwards, and it takes dark animation to a whole other level. The film is loaded up with hauntingly bizarre  visuals and ideas. The concepts here are on the same level as those of a horror movie, (being trapped in another world, with people who want to remove your eyes and sew buttons in their place.) For the doubters out there, just think for a moment (and a quick example before we really get to the story,) of what the evil “Other Mother,” does to Wybie, sewing his mouth shut and then even putting pins in his mouth so that he’s always smiling. Yeah, this is some pretty creepy stuff.

The storyline is right out of a haunted house movie. Shortly after moving into a new neighborhood and new house, (called the Pink Palace,)  Coraline finds that the area is dark and dreary, her parents have no time for her, and there really is nothing to do. She goes outside looking for a well and discovers a freaky kid who rides a dirt bike while wearing a skeleton mask at night. This is Wybie. He turns out to be a harmless fool who is into discovering gross things like slugs. Not exactly much fun for Coraline. Back at her house, she bothers her parents who are working on writing a gardening catalogue. The irony is that they don’t actually have time for gardening, and Coraline’s mother especially hates dirt. They don’t have much time for cooking or taking care of her either, and Coraline’s father gives her the meaningless task of walking around the house and counting all of the windows.

That sends Coraline on her walk through the old, dark house. As if things weren’t creepy enough, Wybie leaves Coraline a doll that looks exactly like her. We actually saw this doll getting made at the start of the film, and by made, what I mean is we saw another doll being taken apart and this new doll being made up, on top of the empty shell of the old one, reworked in its place. We will later learn what that opening sequence was all about, (in one quick line, so listen closely,) but it is important to note the hands that are making it. For now, Coraline continues walking through her house and notices a tiny door in the wall. She gets her mom to unlock it, but learns that behind the door is just a wall of bricks.

Only that night, something happens. Some mice come out of the brick wall and lead Coraline downstairs. When she gets to the door, she sees that the brick wall is gone and in place of it is a purple, green, and blue tunnel. Coraline crawls through it and enters a new world. Kind of. Really what she enters is an alternate reality. There’s the exact same house that she’s living in, only hear her mother and father look and act very different. They call themselves her “other mother,” and “other father,” and on this first visit into the world, everything seems absolutely perfect to Coraline. From the way her mom cooks, (she hates her Dad’s cooking, and always asks her mom to cook, back in the real world,) to her dad playing music on the piano, to the fruit shakes that come down like a chandelier from the ceiling to the gravy train that moves around the dining room table, everything is just fantastic.

Coraline goes to sleep, and when she wakes up, she is back in the real world. She spends the day going to see her neighbors, who also live in the house. There are two women who live in an apartment in the basement, and then an upstairs neighbor who has his own staircase on the side of the house, leading up to his apartment. The upstairs neighbor is a Russian circus performer who tells Coraline that his circus mice have warned him to tell her not to go through the door again. The women downstairs read Coraline’s fortune and tell her that she’s in great danger. Coraline doesn’t believe any of it. That night, she lays out cheese on the floor, hoping to lure the mice back. It works, and Coraline follows them back through the door in the wall.

This is Coraline’s second  visit to the alternate reality, and already things start to get more strange. Her father has a garden that is constructed in the shape and image of Coraline’s face, and he rides a praying mantis around, as if it’s a tractor. The other mother refers to Coraline’s father in this world as “the better father,” and when Wybie shows up, we see that the other mother has sewn his mouth shut, (based on a comment that Coraline made, where she called him a “know it all.”) Coraline and Wybie go upstairs to visit the Russian circus performer, in this alternate world, and they walk through his maze of cotton candy cannons, into a tent, and watch his show. Then Coraline leaves.

On her third visit to the world, things really start coming apart. Coraline goes to see the women downstairs, and they also perform a sort of circus act, (swinging from trapezes,) only there are some very unusual choices made here. One of the women is topless, all but for a pair of tiny sea shells which cover almost nothing. And both women unzip their bodies to reveal other, skinnier, and younger women inside. Is this meant to be like a dream, where sometimes a person changes to another person. If so, the last movie I saw try anything like that was Mulholland Drive, and this movie actually feels in the same vein of that crazy and out there, other world, kind of movie. When Coraline tells her other parents how much she likes it there, they offer to let her stay with them forever. Only there’s a catch. They want her eyes. They want to sew buttons in place of them, on Coraline’s head.

This is when the Threat kicks in. Coraline refuses and suddenly we learn that these “other parents” don’t actually have good intentions after all. They have kidnapped kids in the past and kept the kids here, in this other world, without eyes, as ghosts. On top of that, they’ve kidnapped Coraline’s parents. She gets out of the world safely just to realize that her parents are stuck back in the world. And this starts the third act. Coraline has to go back in to save the kids and also her parents. It’s incredibly exciting and spooky. Especially where the other mother is involved. The more Coraline goes back in there, the less the other mother and the other father look and act like her real parents.

Even after all this is over, and Coraline seems to be safe again, there’s still a final threat. That idea of having the story keep going and going is pretty cool. Especially since the last threat inside of the other world is so scary. The one that follows her back into her own world isn’t nearly as bad, and that’s important, because it’s kind of like a cool down, calming the audience, and bringing them back to a place where everything is okay. This is absolutely the scariest animated movie around. Is it a kids movie? I’m not quite sure. When Coraline ducks under her covers, after her third visit to the strange world, hoping to fall asleep and be back to the real world, only she can’t fall asleep, it’s pretty realistic. There’s no way she would fall asleep after learning what she just learned about the intentions of the other parents. This movie really gets into the ideas of a dream state and nightmare state and combines them with a portal and alternate reality idea, flawlessly. If it had just been that going through the tiny door brought Coraline into a different world,  we’d be talking about a take on Alice and Wonderland, The Wizard of Oz, or The Lion, The Witch, and the Wardrobe. But having it be an alternate reality, where characters are trying to keep her there, makes it especially frightening and cool.