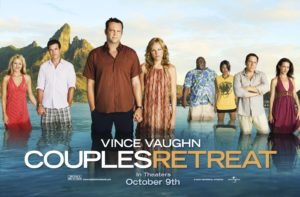 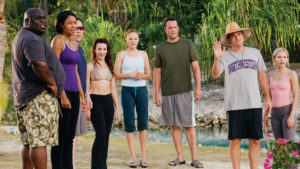 An okay Vince Vaughn – John Favreau comedy, that is worth checking out for a handful of laughs, but is far from anything unique or special.

Couples Retreat is a light-hearted Vince Vaughn romantic comedy. It’s not soft and fluffy, but it also doesn’t have any serious stakes. The story is pretty basic, about four couples who go to a resort island together, for therapy sessions and couple building activities. But it’s the humor that keep this thing afloat. The actors here are all natural talents, and when given the freedom to improvise, they come up with some funny ideas. There’s nothing great about this movie, and it’s on the lower end of the spectrum of Vaughn – Favreau collaborations, but as a B movie, guilty pleasure, experience, it’s not all that bad. There’s fun to be had here, even if it’s not really smart fun.

John Favreau and Vince Vaughn are two best friends who have been making movies together since 1996. Their breakout film, of course, was the smash hit Swingers, a brilliant movie that looked at the life of young singles and dating from points of view that were equally smart and funny. They followed that movie up with Made, which was also very good, but not even in the same echelon as Swingers. And then they started making movies together that were just okay. The Breakup, Four Christmases, and Couples Retreat. Movies that starred Vince Vaughn, but featured Favreau in smaller roles as the friend. These movies aren’t bad, but they aren’t exactly good either. Instead, all three of them work on some basic levels, meaning sometimes funny, sometimes not. Consider them to be B movie, guilty pleasure fare, the kind of movies you don’t have to think much about, but can still enjoy.

One major difference between Vaughn and Favreau’s first two movies together, and their later three, is that with the first two, Favreau was more involved. Not just acting, but also writing and directing. He wrote the screenplay for Swingers, and he wrote and directed Made. Vince Vaughn, on the other hand, wrote the Breakup, and together they wrote Couples Retreat. The strangest part of all of this is that Couples Retreat is the weakest of those movies. You get the feeling that in some ways it was an excuse for these guys to go to Bora Bora with their friends, and get paid to do it. After all, the male actors in the group include Jason Bateman, (who started with them in The Breakup,) and Faizon Love, (longtime Favreau friend from movies like Made and Elf, both of which Favreau directed.) And the director of Couples Retreat is Peter Billingsley, their friend from Elf, The Breakup, and Four Christmases. So if there was ever a movie composed of a bunch of real life friends both in front of the camera and behind it, including writing, directing, and acting, this is it.

But that doesn’t necessarily translate to a good thing, as evidenced by movies like Ocean’s Twelve. With both that Ocean’s movie and Couples Retreat, it felt like our actors were more interested in going on vacation and having a good time with their friends, (Ocean’s Twelve took place in Italy,) than in making a good movie. And so we have Couples Retreat, a movie that doesn’t just set itself on a vacation location, but actually on a resort, on that island. The premise of the movie is that these four couples (like Four Christmases, this one could have easily been titled Four Couples,) come to this resort for a luxurious vacation, with one couple in particular convincing them to go there so that they (that one couple,) can work out problems in their relationship.

The members of this one couple with the problems are Jason and Cynthia, (Jason Bateman and Kristin Bell.) They are the more uptight and innocent / nerdy friends of the group. They are having trouble conceiving, and this has brought them turmoil in their relationship. And so they make a PowerPoint presentation to show their friends, in order to convince them to go on the vacation. The PowerPoint situation turns out to be pretty funny, taking place in a back room of a child’s birthday party, and including statistics and graphs about things like how likely they are to make it as a couple, on a month by month basis.

Considering that each couple is in such a radically different place in their lives, it is incredibly unlikely that this vacation plan would ever work out. Dave and Ronnie, (Vince Vaughn and Malin Ackerman,) have two small kids. That situation is resolved by their kids calling their grandfather to come and stay over and watch them for a week, all in secrecy. And somehow all the other couples fall in place with the plan as well. These include Joey and Lucy (Favreau and Kristin Davis,) who are not interested in each other, sexually, anymore, and Shane and Truti (Love and Kali Hawk,) a mismatched couple if ever there was one. He’s overweight and over a decade older than her, and she’s a young, hot twenty-year-old in the prime of her life.

But they do all go, being told that the couples therapy is optional and that they can choose to do whatever they want once on the island. One of the big selling points is using jet skis. Turns out it’s all a pack of lies. They have signed up for the West Island, which is the couples therapy island. The East Island is where the singles party scene is at. Luckily this movie is smart enough to take us over to the East Island at some point, so that we get to see and experience everything we’ve been hearing about. But first there’s lots of therapy to be had.

This includes sessions with Marcel (Jean Reno,) the mastermind behind the whole experience, program, and philosophy of this place (as we keep hearing.) He instructs them about life experiences, such as a scene where Jason and Dave end up in a shark infested ocean having to make it back to the boat. Then there’s a yoga instructor who does incredibly sexual poses with the women, much to the men’s dislike. And finally, there are individual therapists, (played by actors like Ken Jeong and Michael Higgins Clark,) who hold personal sessions with each couple. Of all of this, the only thing that doesn’t really work is the therapy sessions. The other situations do work, in large part because of the reactions by the actors. Their reactions to the yoga instructor, including pushing him away and even threatening him, are pretty funny. And so is the shark encounter with Dave’s over reactions, “maybe they’re marking me for later, I don’t know.”

But as the movie goes on, it’s agenda becomes a little too obvious. The screenplay calls for each couple to be having problems and needing to work them out. And sometimes those problems are forced and fake. Like the ones between Dave and  Ronnie. She wants to go see a waterfall, and he’s upset about the shark encounter that night, so refuses to take her there. And that’s the extent of their problems. Joey and Lucy, on the other hand, have real problems, where they’re both interested in hooking up with other people. But in one climactic scene where Dave and Joey find themselves yelling at each other in the middle of s party, the ridiculous plan to have every couple in conflict is out front and center, and it is way too stupid.

Luckily, that doesn’t come up as often as you would expect. And some of the earlier scenes that deal with it, (like one with the guys sitting in a sauna with snow coming down,) kind of work. In that scene, they divide whether going to the “highlight reel,” is cheating. It’s a dopey question (of course it’s not cheating, this is fantasy, staying all in their heads,) but that’s the thing about this movie… even when it’s dopey, it’s still kind of fun. Take the Guitar Hero showdown scene, for example. The concept is idiotic, playing video game guitars for the win, but the way it is handled (cowboy western music, slow motion shots, a push door like they had in old western saloons,) definitely help it along. Add those things with the Billy Squire song, “Lonely is the Night,” and the fact that Dave is a Guitar Hero salesman, as established earlier on in the film, and suddenly the scene is not all that bad.

Perhaps this is symbolic of the entire film. Nothing great is happening here, in this movie. No great moments or conversations or anything. And yet, it’s still kind of fun. The characters are interesting. There are some definite laughs. And there’s enough diversity, between the couples and the situations (for example, just look at how differently Jason reacts to the yoga instructor touching his wife, than the other guys do, welcoming it as if he doesn’t notice what’s happening,) to make it enjoyable. Hardly a great film, but worth a watch for some laughs.