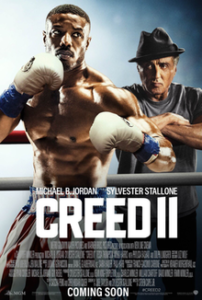 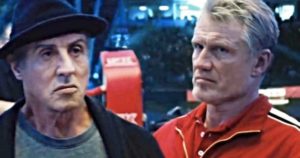 The new generation Rocky series that uses the sequel here to cash in on all the right nostalgia.

This movie is certainly big on nostalgia. In fact, the whole premise here revolves around paying tribute to Rocky IV, the best of the Rocky movies, (although it’s a tough call between Rocky IV and the original Rocky.) In Rocky IV, a Russian fighter named Ivan Drago killed Apollo Creed in the ring. Apollo was the father to Adonis Creed, (Michael B Jordan,) the star of these movies. So now, Drago has a son who is also a fighter, and the movie is about the rivalry and fights between him and Adonis. It ends up taking a pretty formulaic approach, but most fighting competition movies do, so that’s not really surprising. Seeing Ivan Drago, (Dolph Lundreon,) back on the screen with Rocky is pretty great. And so are the moments that cash in on anything from the original Rocky films, such as when Bridgette Neilson pops up. But the Adonis storylines, (like one about his baby possibly being born with hearing issues,) aren’t quite enough. Stallone is on hand here, but he isn’t going deep enough, (for example, he never confronts Drago about what happened to Apollo.) This movie isn’t nearly as good as the first Creed, but it’s still okay. Especially for nostalgia purposes.

Creed 2 is the sequel to what has become the new incarnation of Rocky, with the ability to bring back all of the Rocky Balboa nostalgia. For well over a decade, (going from the seventies through the eighties,) the Rocky movies served as a masterpiece in sports movie storytelling and also B level fun. But it had a hard time finding its way back into our lives in the nineties and two thousands. Rocky 5, the one where Rocky was too old to fight in the ring and became a manager and street brawler instead, was a dud. And sixteen years later, when he somehow did get back in the ring, with Rocky Balboa, it was even worse. It wasn’t until they thought to bring in a new title character, with Michael B Jordan starring for the movie Creed, that things really got back on track.

Other than the original Rocky film, it is pretty much known that Rocky 4 has always been the best of the bunch. In fact many consider it better then the original, although the first movie is the one that won all the Oscars. But Rocky IV is the movie that took things to the next level. That’s the one where Rocky takes on the Russian, (Ivan Drago, player by Dolph Lundreon.) Its the movie that was the boxing equivalent of the Cold War, with both fighters representing their countries. And it was the movie where Drago killed Rocky’s best friend, Apollo Creed. So now, for Creed 2, it’s all about going back to Rocky IV.

The way that the new Terminator movie, Terminator Dark Fate, is all about going to Terminator 2, (literally bringing back both Linda Hamilton and Edward Furlong,)  Creed 2 knows what people hold close to their hearts, from the Rocky series, and as far as movies go, it’s Rocky IV. And do this movie has Adonis Creed, the son of Apollo, (Jordan,) taking on the son of the Russian. And it has plenty of Ivan Drago to go with it, as Drago plays his sons manager.

On top top of that, the movie also features the son of Apollo’s manager, coaching Adonis when Rocky refuses to. That son and manager is played by Wood Harris, the actor who played big boss Avon Barksdale on The Wire, (where Michael B Jordan got his start.) So having them back together in this film is a nice tribute. But other than a few brief conversations about Apollo, the movie doesn’t dig into the nostalgia enough. Rocky has a line where tells Adonis that he should have stopped the fight. And Adonis’ mom tells him this new fight is not about his father. But the one who is never confronted about what happened is Drago himself, and maybe he should have been.

Instead, Drago is made to be more of a sympathetic character here. Apparently the whole country of Russia turned on him, after he lost to Rocky, and even his wife left him. It’s nice to see Bridgette Nielsen back, in a small role (Drago’s Former wife,) but boy is she underused. She has one quick scene and maybe about two lines. We want more. And in terms of making Drago a sympathetic character, what a mistake. He was so perfect as the big bad ultimate villain. His lines of dialogue from that movie were small, but unforgettable… “If he dies, he dies.” Why change that now. I guess the point is that time heals wounds and  that it’s not the eighties anymore where everything is either black or white, good or evil.

And that brings us to the current storyline. Picking up after the events of the first movie, Adonis is on top of the world, having just won the championship, and now it’s time for him find a challenger. That’s when Viktor (Drago’s som,) who is fighting over in Russia, sees an opportunity. Really it’s a promoter who sees the opportunity and brings it to Victor. Take down the heavyweight champion of the world, an American, who also happens to be the son of the man that was killed by Victor’s father. And so Drago is dispensed to Philadelphia, where he shows up at Rocky’s restaurant one night for s sit down meeting.

When the idea of the fight gets brought to the attention of Adonis, he is all about it. He jumps at the opportunity. Only Rocky wants no part of it. He thinks Victor is too powerful for Adonis, and that Adonis will get hurt. Up until now, there’s been an ongoing discussion between Adonis and his fiancé, Bianca (Tessa Thompson,) about whether or not they should leave Philadelphia and move to Los Angeles. Adonis has put the brakes on moving because he doesn’t want to leave Rocky. Now, when Rocky refuses to train him for the fight, it gives Adonis the push he needs. So he packs his family up and they move to California, where Adonis starts training under Tony, “Little Duke,” Evers (Harris.)

In What has to be one of the most predictable moments in the movie, Adonis loses the match to Victor, (badly,) and this leads to Rocky training him for the rematch. This has been the formula for most Rocky movies. It is also the storyline used in The Karate Kid Part III, when Mister Mayagi refuses to train Daniel, then Daniel gets beat up badly by his opponent, and it prompts Mayagi to agree to train him for the climactic match of the movie. When Adonis agrees to fight Victor early on, you can predict he’s going to lose. It’s too early in the movie for him to win. But when Rocky refuses to train him, you can be sure of it. Only when these two work together at the end, will Adonis be successful.

Before we get to that point, however, there’s a lot to go through. Adonis is in the hospital, recovering from Victor’s beating, and boy is it bad. Then, Adonis and Bianca have a kid, and there’s a subplot about whether or not their daughter will be born with a hearing disorder, since her mother has one. And finally, there’s Adonis and his mother (who lives in Los Angeles,) and sees that her son needs male guidance. She calls in Rocky to help. And so Rocky takes Adonis out to a primitive training facility at a remote location in the middle of the desert, and they begin to train.

The end is of course the big match. It takes place in Moscow, which is a nice call back to Rocky IV. But this movie could have done more with that. The training sequence in Rocky IV, in a log cabin in Moscow, and on the snow covered mountains is probably the best and most memorable training sequences of any Rocky movie. So why not pay tribute to that? Have Rocky bring Adonis to the cabin to train, or at least to the mountains. This movie does an okay job with the nostalgia, but it could have done so much more. Drago never addresses killing Apollo Creed and the final fight is in Moscow, but the training for it doesn’t go anywhere close to that location. As it’s own thing, apart from Rocky IV,  this movie is just okay. It’s the Rocky nostalgia that really makes this thing worthwhile. Even when Rocky recounts for Adonis how he proposed to Adrian, (in Rocky II,) and the words he used, it brings back memories. Thank god Stallone is in these movies reprising his iconic role (he was Oscar nominated for best supporting actor for the first Creed movie,) because without him they wouldn’t be half as good. This movie isn’t nearly as powerful as the first Creed, but it’s a decent film, that for the most part does a fine job.