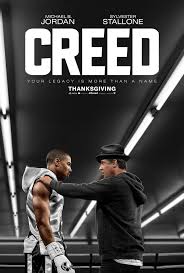 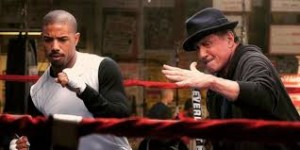 A pretty entertaining movie with just the right amount of Stallone and references to Rocky while still carving its way to show that this movie has ideas and a path of its own.

This movie is pretty good. A definite crowd pleaser. Creed has just the right amount of Rocky, which means he was far from the star, but was still featured quite a lot. And it also made a bunch of references to the Rocky series, while at the same time made the film really feel like a spin-off, and yet also like its own thing. This was an impressive film. Nothing felt cliched or ridiculous, and instead, we got a pretty entertaining experience. The boxing scenes, in particular, were incredibly well-shot and powerful.

Creed is a movie that turns out to be better than expected. If the last Rocky movie, (Rocky 6,) told us anything, it was that this series was done. Stallone was tired and old and in no way belonged back in the ring. The fifth movie, where the big fight was on the streets, against Tommy Morrison, wasn’t a whole lot better. Well, this new film, Creed, is the movie that reawakens the series. It is absolutely the best film since the fourth one, and the fourth film was quite possibly the very best, (either that or the first movie, which won best picture of the year.) The fourth film is the one where Rocky goes to Russia to represent America while fighting Ivan Drago, the man who killed Apollo. Creed is the story of Apollo’s son.

The good news… this is not Rocky 7. It doesn’t even attempt to be. Rocky doesn’t appear until almost a fourth of the way into the film. This is the story of Adonis Johnson, (Michael B. Jordan,) who eventually takes on the name Apollo Creed. And it is absolutely a spinoff as opposed to a sequel. That being said, there are plenty of references to the Rocky series, with Stallone mentioning both Adriane and Paulie in a number of conversations. At one point he even goes to visit their graves, on his own. The movie uses the classic Rocky music, but only in one scene towards the end. It saves this music for just the right moment. In the meantime, it uses a sountrack and song that was crafted to very much sound like the Rocky music, complete with the Church bells and everything. That song is played in the right spots, including a scene where Adonis trains by running down the street to Rocky’s gym, and has guys on motorcycles circle around him as he is jumping up and down, shouting out to Balboa, who watches from an upstairs window.

Long before any of this, we meet Adonis as a boy of about ten years old. He is in a group home where there is a huge fight among the boys. The home looks more like a prison than like comforting living quarters, and Adonis is leading the fight. Apparently another boy said something about his mother or father and Adonis just snapped. A woman comes to see him and it turns out this woman is the widow of Apollo Creed. Adonis is the son that Apollo had with another woman. That means that Apollo was cheating on his wife, (this woman who now comes for Adonis,) and Apollo died before Adonis was even born. Apollo’s widow takes Adonis home and gives him a place to live.

From there, we cut to an adult version of Adonis, now played by Jordan. There is a boxing match in Tijuana, Mexico, and Adonis easily takes out his opponent. This match is filmed incredibly well, with the camera staying outside of the ring and behind the ropes at all times.  It gives us a unique perspective on the fight, feeling like a spectactor, more than it does like we are part of the match. This is warm up material. Later on, of course we will go into the ring, but this is a way that the director can make each fight look a little different, filming them in unique and creative ways. It reminds me of Raging Bull, the great Scorcese-Deniro boxing movie, in that way. Each boxing scene is filmed brilliantly and with a feeling of its own.

We move from this fight to a scene of Adonis in an office dressed up in a nice shirt and tie. He goes in to see the boss and quits his job. The boss can’t believe it. Apparently Adonis just got a promotion and the boss is in shock. Who quits a job right after getting promoted, the boss asks him. Adonis doesn’t care. It’s not about money for him. It’s about passion. This job is just not for him and he’s not the kind of guy who will stay at something he doesn’t enjoy. Especially when there’s a fire building inside of him to do something else. Adonis tells his mom he’s gonna start training, and off he goes. He begins at a local gym where Apollo used to train. There he takes on two different opponents.

The brawls are handled really well here, not only in the filming of them, but also in the way that each one begins. Each fight starts by an instant freeze frame on the opponent where a whole list of statistics comes up on the screen, telling us everything we might need to know about this opponent. This includes how many fights the opponent has been in and what his record is to date. Adonis is told that he’s not ready to get in the ring, by the trainer who is standing outside, (Wood Harris, who starred with Jordan on the amaing television series, The Wire.) Adonis gets in the ring anyway, challenging the guy who just finished his fight. With this one, Adonis wears no head gear and easily knocks the guy out. Then another, bigger guy challenges Adonis, and this time he does put the head gear on. This guy takes Adonis out. It’s all fast moving and interesting, and it shows us that Adonis might be good, but he’s got a ways to go before he is great.

From here, Adonis leaves his mom, leaves Los Angeles, and moves to Philadelphia. His goal is to find Rocky Balboa and get Balboa to train him. Before Adonis even goes to see the champ, he finds the local gym, where Rocky used to train, and meets the on-call trainer. The man tells him that he’s got a jam-packed schedule, but he’ll check in with Adonis for twenty dollars extra. Adonis then goes to find Rocky. He finds him at a restaurant, named Adrianes, where Rocky is the owner. Adonis does not tell Rocky who he is. Instead, he asks about a third fight between Rocky and Apollo, that happened behind closed doors, and that most people don’t know about. Adonis wants to know who won. Just knowing about this fight tells Rocky that this kid must be someone important. Adonis then tells him that he is Apollo’s son. The third fight, that he is speaking of, took place at the very end of Rocky III, with the freeze frame capturing the two fighters hitting each other and the song “Eye of the Tiger,” coming up to end the movie. We never saw who won that fight either.

Adoinis is unable to persuade Rocky to train him, at first. He leaves the restaurant unsatisfied with the result. Adonis then goes home, to his apartment, where he runs into trouble with his neighbor. She’s an attractive girl, named Bianca, and the problem is that she is blasting her music. Adonis goes downstairs to tell her to make it lower, but she refuses. He later learns that the music is her life, and what she does for a living. On top of that, she is going deaf and wears hearing aids. Adonis shows Bianca that he is sensitive and understanding about her situation, and the two of them start dating.

Meanwhile, Adonis also goes backt to the restaurant to see Rocky. He now calls Balboa, “Unc,” for Uncle, and shows the champ diagrams and directions for different techniques he wants to try. He’s trying to get Rocky’s feedback, but also to make Rocky thirsty for more. It works. Pretty soon Rocky is at the gym checking up on Adonis. When he sees it’s not the best place for him, Rocky moves Adonis to another gym and introduces him to a whole team of trainers who will work with him. This is where the real training begins. But there is conflict that hits both Rocky and Adonis as the movie goes on. Rocky gets sick and refuses treatment. He talks about how Adriane died from cancer and how treatment couldn’t help her. Adonis gets into a brawl at one of Bianca’s concerts and ends up in a big fight with her. He also finds himself in prison with Rocky coming to bail him out.

All of this leads to the final training and the final fight. Before the fight, we get the fighters trainer coming to see Rocky and Adonis in Philadelphia and proposing his terms. He wants Adonis to take the last name Creed. Then we get the weighing in scene where the opponent insults Adonis every chance he can get. At one point they nearly come to blows, right there on the stage. And then there’s the big fight and it is handled perfectly. The camera moves wildly around from one character to another, really using tracking shots to give us the whole perspective of being inside that ring. It is a fantastic fight with a very satisfying conclusuion. This is one of those movies that gets better and better as it goes on. That includes the final conflicts in the second half, the new opponent and every scene with him, and then of course, that masterful climactic fight.