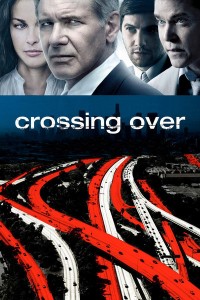 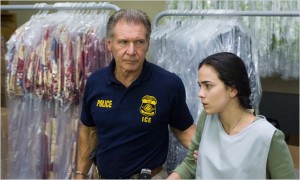 This movie might seem preachy at times, but it has some clever storylines and keeps are interest, and you really can’t ask for much more than that.

Crossing Over is amazingly enough a pretty decent film. i say amazingly because the movie went through a lot before it got released including one star having his part completely cut out, and all kinds of crazy cuts by the studio. even still, what we get is an enjoyable and risky film. the movie crosses into some pretty heavy territory at times, just the same way that crash did, and comes away with some strong storylines. not every story here works, but more them do than don’t, and the ones that are dull end up drowning themselves out and turning into something else instead of dragging on through the film. the multiple story format works here with big time actors appearing in each one, and a plot that explores corruption, dishonor, and self-preservation. it’s actually a pretty cool fim.

Crossing Over is a pretty decent movie. it’s one of those films where there are all different stories going on at the same time, each with different characters, and the movie cuts back and forth between them. i tend not to like those movies very much, especially when only one of them features a star actor. two films come to mind right away, that fall into that category. babel with brad pitt, and hereafter with matt damon. if i go to see a brad pitt movie, i want to see brad pitt. he doesn’t have to be the star of the movie, i’m all for watching him in ensemble pieces (killing them softly, the counselor), but he can’t be only in one-third of the movie, while the film expects me to watch two-thirds of no-name foreign actors. those are the kinds of movies i don’t care for.

luckily, Crossing Over isn’t one of those. it’s more like the robert altman movies of the past, where there are a bunch of big name stars involved so that even if we’re not watching the harrison ford story, for example, we might be watching another name actor involved in something. the stars on board here are ford, ray liotta, ashley judd, and jim sturges. really it’s the first three who have weight to their names, and sturges is just thrown in there as a semi-recognizable actor to round out the cast. that’s okay though, because three name actors are enough if the movie handles them correctly.

this movie does. it splits each actor up so that they all have their own stories. and all three of those stories turn out to be pretty interesting, even if they don’t exactly start out that way. the stories do cross into each other, like they usually tend to do in movies like this, but it’s not as if the film goes out of it’s way to make connections. it never sacrifices it’s story at all, in order to make the connections happen.

the first story is about harrison ford as a border patrol agent. he’s one of the guys who goes in to a place where illegal immigrants are working and busts the door down and rounds a whole bunch of them up. ford plays max brogan, and he’s a good guy in a job that apparently is filled with a bunch of scummy characters. every scene with ford seems a little too wholesome, starting with his first scene where he insists that a man who has been checked into a holding cell needs medical attention. when the guy sitting at the computer finally looks into it, he sees that brogan was wrong, and that the man was seen by a doctor and then released. i’m not sure why the movie had brogan be wrong about this, and think it’s a bad move. it shows that brogan’s concerns aren’t legitimate, but are actually a little too caring.

luckily brogan’s story gets much better as it goes on. he really has two stories that he gets involved with and it’s the second of the two that is the interesting one. the first of his stories is about a woman who asks him to check in on and help out her children. brogan now goes out of his way to do this. but then he finally gets involved in a cool story when he shows up at the house of his partner, meets his partner’s family, and learns of the shame the partner’s sister is causing the family. when the sister turns up murdered just days later, brogan starts playing detective and trying to solve the case.

another story is that of cole frankel (ray liotta). he has a car accident with claire, (alice eve), an aspiring actress, who is also an illegal immigrant. the accident happens right outside the immigration office, where he works and where she is leaving, so there are no coincidences about why they are both there. frankel takes her out for lunch to talk about her options, and she knows what he’s really after. she makes a deal to have sex with him for two months, whenever he wants, and in return, he will get her a greencard.

that story turns into two other stories. one is about frankel’s wife, denise, (judd) and the other is about claire’s boyfriend, gavin (sturges). the gavin story is just okay. it’s about his jewish heritage and how he is not very religious at all, but figures out a way to predtend he is in order to get a greencard and stay in the country. he poses as a religious figure, impersonates a person who is very involved with the religion, and is put to the test in one cool scene where the immigration officer calls in a rabbi to see if gavin is for real.

denie’s story is much more interesting, although we don’t realize that it’s denise’s story until about halfway through it. this is the story of a muslim girl in highschool who makes a speech to her class about how she can sympathize with the terrorists who flew planes into the world trade center on september 11th. her speech gets all of her classmates riled up, and makes her hated among her peers, but that’s only the start of it.

that evening, the fbi comes through her door and turns her house upside down trying to see if she has any connection to terrorists. they have a copy of her speech and have gone through it with a fine-tooth comb, reciting words that she wrote. the fbi now puts the girl’s entire family under pressure, planning to deport them back to their homeland. this becomes denise’s story when she takes the case, defending the girl and trying to fight for her.

Crossing Over is a powerful movie. not all of the stories work, but about half of them do, including one about a korean boy who gets caught up with the wrong gang and ends up going along for a grocerey store robbery. the stories that work are pretty powerful. especially the one about the girl who sympathizes with the terrorists and has to pay a major price for it. this movie is definitely meant to be like crash, with it’s international cast and multi-cultural focus. just like that movie, this one is very much about people having problems with each other. there’s even a scene where one character lets another one go, just like the terrence howard-ludacris scene of crash. even so, Crossing Over is pretty good, and if you read all the stories about how sean penn was in the movie and had his part wripped out of it, it’s amazing the movie turned out as good as it did. credit that to director wayne kramer, (the cooler), who definitely has some talent. this isn’t a great movie, but it gets the job done.