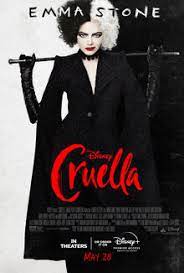 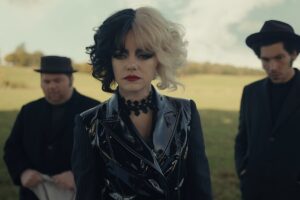 A fun and lively prequel to the 101 Dalmations story, featuring some very creative story ideas.

Now this is how you do a live action Disney remake. First, you do t actually remake the movie, but instead tell an origin story that can lead into how the characters got to be the way they are in the classic movies we all know and love. Second, because it is a prequel, you get creative with the story and find new angles to approach it from. You pepper it with lively music, quick witted comedy, and loads of plot twists. It might not really be a remake at all, but it’s a damn fun experience.

Cruella is a movie that takes a complete new and creative look at the characters who will become those in the 101 Dalmatians story. This isn’t so much a version of that classic Disney tale that has never been told before, but instead is a different story that will apparently lead into that one. And so everything about this story we are given here, is original. There is no crossover, other than the characters. Now, that being said, this one does involve having the two burglars kidnap the Dalmatians at one point, which is a curious choice, since that obviously happens in the next movie too (that’s the central event that 101 Dalmatians is based around.) A best guess for why that happens here is so that they can use images and clips of that idea in the promotion for the movie to lead people to think this is version of 101 Dalmatians. It’s all about the misdirect. The prequel element is a surprise, and a happy one. Especially because it means there are a ton of Easter Eggs, (mainly at the end,) that will lead into the next movie.

But before we can even think about a follow-up film, we have to make sure that this first movie is good, and worthy of a sequel. Luckily, it is. It is the story of Estella, (Emma Stone,) a girl who witnesses her mother get killed, when she is at a young age, and then lives the life of an orphan, growing up alongside to orphan boy thieves. These would be Boris and Jasper. You might notice that I said Estella and not Cruella. That’s because Cruella is more of a made-up personality or imaginary character who Estella becomes when the situation calls for it. We start the movie off when Estella is born, with her black and white hair parted right down the middle of her head, making her look like a version of the Batman villain, Two-Face.

From there, we follow Estella through elementary school where she is constantly the target of bullying and fights due to her hair. It’s here that we meet Anita, a girl of Estella’s age, who becomes her friend. This is important because in 101 Dalmatians, the character of Anita is one of the dog owners, and knows Cruella Deville as an old schoolmate of hers. It isn’t long before Estella is kicked out of her school for fighting, and ushered off to a new school in London. And once she and her mother arrive in London, her mother says she needs to pay a quick visit to a former employer and takes Estella to a mansion which sits on the edge of a cliff during a late night party.

Everything so far has been presented to us with speedy cuts, fast music , and Estella’s voice-over narration. It makes for a very quick moving and witty tone. At the mansion party, Estella is meant to wait in the car with her little dog. Only the costumes and outfits she sees people wearing, out the car window, are too appealing to her. So Estella leaves the car (with her dog,) to sneak into the party. She hides under a table, but when her dog spots the dalmatians and runs out, it causes a whole mess of a problem. The dalmatians chase after her and end up running her down outside. Only suddenly they jump over her and go straight for her mom who is standing at the edge of the cliff. This leads to her mom going right off the cliff and getting killed.

Estella runs off, and this is where she becomes an orphan, hanging around a fountain that she once visited with her mom, in the middle of London. That’s where she meets Boris and Jasper and becomes a member of their gang. At this point, what the movie is doing is giving us little details that show all the fine points. Not just how she met Boris and Jasper, for example, but how and why she was able to join them. Not just how her mother died, but the reason why Estella and her mother were coming back to London in the first place. Most movies that try to flesh out every detail end up delving into the dangerous territory of telling too much and leaving the audience bored. Not this movie. Instead, it does show us a lot and fills in the details, but it still manages to do all this in a a quick way. Humor plays a large part in that.

Now we’re in the second act, and Estella is a grown up. So are Boris and Jasper, now being played by Paul Walter Hauser (so great as Richard Jewell in the Eastwood movie by the same name,) and Joel Fry, (who played the funny best friend in the Beatles movie, Yesterday.) The three of them are a three-man team of grifters, pulling jobs and scams all over town. Estella does the sewing and makes outfits so that the three of them can play different parts, and go in wearing disguises. And it works. They even have the dog in on it, to make for some funny robberies. The takeaway from all of this, among other things, is that Estella is really good at sewing and is a natural for fashion and clothing design. That will be the part that carries us on to the next act.

In that next act, Estella starts working for an upscale clothing store. This place is exclusive and it’s a special opportunity. So special in fact, that just to get the job her two friends had to pull a scam to get her resume dropped in the right pile. But even getting the job isn’t enough, as it turns out to just be cleaning the floors of the store, and not actually doing fashion work. That all changes once the store gets visited by the Baroness (played by the great Emma Thompson,) who notices Estella’s work on a store window that she has remodeled. The timing here is a little too convenient and too perfect… this is the one time Estella has done this, and if the Baroness doesn’t walk in at that exact second, Estella is about to be fired. Even still, it works. What works about it is the way that the story evolves and that Estella moves up the ladder from job to job. And sure, it seems like they’re cutting corners a little bit here, with the lucky break coming at just the right moment, but they certainly weren’t cutting corners before, giving her a job at the clothing store which turned out to be an awful experience, when she thought it was going to be her big break. In other words, the movie does show her work her way up, and shows that it hasn’t been an easy path to success, even if there is that ex-machina thrown in there, at the end.

So now Estella is going to work for the Baroness, a clothing designer. She’s working at a designer warehouse that is part of the complex with the mansion that she was at earlier on in the movie. And that brings with it a whole bag of reveals. the Baroness turns out to be a character who resembles the Miranda character (Merryl Streep,) from the Devil Wears Prada. This movie has been compared to that one a number of times, by all different critics, and it’s not very hard to see why. They are both about fashion and deal with a naive young apprentice trying to survive against an overbearing and blunt to the point of offensive, boss. In Prada, Miranda was bad, but she still seemed human. The Baroness, in Cruella, does not. She’s more cartoonish, (at one point she pops of cork of a champagne bottle in a waiter’s eye. At another she cuts Estella with a sharp object and instead of showing remorse simply comments on the shade of red that is Estella’s blood.) But having a somewhat cartoonish villain in a movie based on a kids book and film, is not a bad thing. And this is most definitely not a kids movie. It’s far too dark and devious. When I say cartoonish, I’m not talking Arnold Schwartezenegger in Batman and Robin. I’m saying there’s some humor mixed in and characters sometimes seem exaggerated…larger than life.

The more the movie goes on, the more plot twists unfold. Like Knives Out this movie takes the smart tactic of revealing some of those twists around the half-way point while saving others for closer to the end. It’s a good move, peppering the film with twists and reveals that keep the gears turning and keep the ideas evolving. And the movie also continues to get darker as it goes on, as we see uglier sides to some of the characters. Speaking of characters, the four primaries here are all fantastic. Emma Stone and Emma Thompson are the two leads and they both blow the roof off. But Paul Walter Hauser and Joel Fry, as the best friend burglars, are exceptional as well, giving each of their characters real personality and dimension. And the story keeps moving, not just through twists, but also through what Estella pushes herself to do. At one point, she decides to embrace her alter ego and introduce Cruella to the world, not as a villain, but as a young, up and coming fashion designer. It sounds ludicrous and bizarre, and yet it totally works.

Maybe the reason why this movie all gels together so nicely is because of the attitude it embraces. There’s a very free-spirited, punk rock attitude going on here. The soundtrack is full of sixties and seventies rock hits including songs by the Rolling Stones, the Doors, Blondie, ELO, Tina Turner, and Deep Purple. These are songs that are pretty recognizable in the mainstream, and that carry a punch to them, as they are played in quick spurts throughout the film. That plus the ever-evolving plot, plus the humor, plus the lively performances make for a great formula and a very successful film. This is one of the better live-action remakes Disney has put out, and maybe that’s because it’s not really a remake at all. By not just recycling the story of 101 Dalmatians, this movie finds that it’s not tied down in any way, and can embrace the free spirit of creativity. It certainly does that, and while it might seem a little too long by the ending, it’s all in the interest of making a pretty fantastic story, full of big twists and turns.