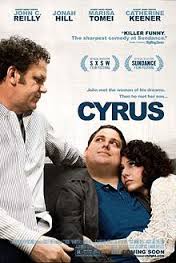 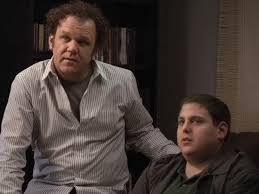 A strange, but fascinating black comedy where great actors have a good time bringing the unique storyline to life.

Cyrus is a movie that works only because of the actors involved. The story is different, but not all that different. It’s about a guy named John who starts dating the mom of a boy and the boy’s problems with this new man. The boy, Cyrus, is not used to sharing his mother and having to compete for his mom’s attention. And so Cyrus does some bad things to John to try to scare him off. All of this seems like familiar territory.

But in any of the TV shows or movies that would use a plot like this, the kid would be young. Anywhere from ten to fifteen. In Cyrus, the boy, played by Jonah Hill, is pretty much an adult. His character is twenty-two years old. He’s basically a man. And so that, right away makes this movie different. There have been other versions of adults not wanting to leave the house (failure to launch), or not wanting to compete with their mom’s new boyfriends (baby boy), but Cyrus feels different than any of those movies.

Credit that to both it’s cast and it’s tone. For tone, it is somewhere between a comedy and drama. The comedy elements are of a black comedy tone, where the man and the boy threaten each other in whispers, while the mom is in the next room. The drama is about trying to give depth to the boy character and the reasons why he does the things he does.

But the main reason this movie works is the cast. Specifically the two male leads. Jonah Hill is a very smart comic actor and he knows how to deliver dialogue in a way that will get the most laughs. He has a way of bringing even movies that don’t look very good to life, like get him to the Greek. And there, he was playing the straight man. That’s not what he does best. Hill is best when he gets to play the colorful, crazy character like he did in Superbad. He gets to do it again here.

And John C. Reilly plays John, the straight man of the movie. He’s the guy who falls for the girl, Molly, played by Marissa Tomei. John is a loveable loser here, a guy who is not all that bright, but seems to have his heart in the right place. It’s an incarnation of the roles Reilly has played for Paul Thomas Anderson with Boogie Nights and then magnolia. Like Hill, this is also the kind of role that John c Reilly does best. He’s played crazy before and done a fine job with that, (step brothers and cedar rapids), but he’s even better as the guy we can relate to.

At the start of the movie, John is spending time around his ex-girlfriend and her fiancé. He and his ex (played by the always-great Catherine Keener) remain friends through the years, but since their breakup, John’s life has gone downhill. Apparently he wasn’t doing so great even when he was with her, and that’s the reason why she left him. And now he’s doing even worse.

She brings him to a party and he ends up being brutally honest with a girl on a couch about how much his life has fallen apart and how he really needs somebody and is borderline desperate, but feels he has a lot to give. The girl leaves. But apparently Molly was nearby when the conversation happened, and overheard it, and was intrigued by this drunken guy’s brutal honesty. John leaves her to go enjoy a song and that only makes her want him even more. Soon the whole party has joined in dancing along with John and Molly, and the two of them leave together for what could easily be a one-night stand.

Once Jonah Hill enters the picture as the title character, the movie suddenly becomes a lot of fun. It was fine before this, and in fact I like that the movie took it’s time unveiling Molly’s little secret, making a sort of mystery out of it for John. If he hadn’t gone to her house, who knows if or when she would have told him the truth about her son. And Cyrus has a lot of fun with John, hiding his shoes and making him sit through a very strange musical performance.

The tension between these two builds up throughout the film. Especially when Cyrus has issues with moving out. There’s a great wedding climax in which we’re expecting a big scene and the movie does not disappoint. It’s certainly a weird film, especially with the mother-son relationship between Molly and her boy. But it’s also kind of fun. These are actors that you want to be around, even when what they’re doing makes you cringe. It’s not a fantastic movie, simply because what it boils down to is not all that original, but these actors know how to bring the material to life. It’s definitely entertaining and funny, and a somewhat different spin on an old story.