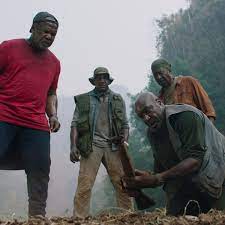 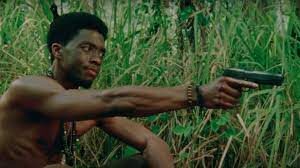 Another masterful Spike Lee film, this one follows present day characters on a quest through the jungle, reliving their past while dealing with all kinds of new conflicts.

Spike Lee has done it again, giving us a richly powerful movie about men on a mission, who must also confront demons from their past. Da Five Bloods is about a this team of men who once fought together in Vietnam, and have now returned to find and retrieve gold bars that they hid there, during their time in the war. But the gold storying is just the tip of the iceberg. What we really have is a story about how these men’s lives have been effected by the events that took place while they were here, in Vietnam, the first time. Two of the characters in particular, Paul (Delroy Lindo,) and Otis (Clark Peters,) get real fleshed out storylines and demons that haunt them. This movie crosses into all sorts of areas, including psychological warfare and even action. It is Lee showing the world how much he can do, and how deep he can go. And the movie is a monster success.

Da Five Bloods is a Spike Lee movie, and it easily joins the ranks of some of his better movies from the last twenty years. We’re talking about movies like The 25th Hour, Inside Man, and Summer of Sam. Lee is a director who is very much in tune with his community, which is to say that he makes movies about the black experience. But if you notice, none of those movies listed in the three mentioned above, from some of his best in a while, are about black communities. Now what is well-regarded as Lee’s best movie of all time, Do The Right Thing,  is very much about a black neighborhood in Brooklyn. And he’s had plenty of other great movies about the black experience too, such as Clockers. But over the past two decades or so, (basically in the 2000s,) Lee has taken on new territory as a filmmaker, proving that he is able to handle other subjects with greatness in filmmaking as well. And more recently, that is where he has shined the brightest.

Da Five Bloods should be included on that list. Yes, it is about a group of black men, but this movie is not about a black community, or issues like racism, at all. Instead, it is about soldiers, finding treasure, and dealing with post traumatic stress disorder. The story is about four men who have been friends for decades and now reunite for a final trip together. It’s about the characters coming back to Vietnam to go out in the jungle. Very different then movies we’ve seen before. The only thing it brings to mind is Three Kings, which is also about soldiers hunting down hidden treasure (and also featured a somewhat similar title.) But Da Five Bloods definitely gets points for originality.

One way that this film is different from what one might expect is that another movie based on this sort of storyline would have probably included far more scenes in the past, showing the characters when they were first in Vietnam and then cutting it with the present day storyline. This movie chooses to only show a small handful of past scenes, and mostly takes place in the present day, which turns out to be a very smart move. It keeps the film feeling like it is doing a singular story that just keeps on moving. It also allows the audience to dig deeper into the way these characters are now, and what they are going through. With such an ensemble cast, to watch all five members in two different times and storylines might have felt like we were following ten characters. And that would have been challenging to keep up with. Here, there are certainly flashbacks, but not too many, and they are mostly pretty quick and to the point.

One of the reasons for the speediness of most of those flashbacks is probably because the same older actors who are playing men in their sixties and seventies (their real life age,) are also playing the younger versions of themselves. No makeup, no de-aging technology, no younger actors playing the characters.The idea to employ the same actors makes a lot of sense. After all, if other actors were brought on it might be hard to know which of the kid actors was playing which character. But what does seem a little strange is how limited the makeup is, (if any.) That means that the younger versions of some of these characters even have grey hair. But it also means that most of these characters are barely shown up close in the flashbacks. Instead, the flashbacks mainly focus on a character names Norm, or “Stormin Norman,” played by the great Chadwick Boseman. So maybe the reason for having such quick and limited flashbacks it in the hope of not making it so obvious that they are barely showing our main characters during that time, or the hope that when they are shown, we don’t really notice that they still look to be older men. Whatever the reason, limiting the flashbacks definitely works.

It’s also a smart move because the present day story is the more interesting and more relevant one. It’s the one we can become more invested in, while the flashbacks sort of represent a summary of the main events that happened to these men during their time in Vietnam. The finding of the plane with the gold, the learning of the assassination of Martin Luther King, the firing on a bunch of Vietnamese soldiers who were unsuspectingly walking through the jungle. But before we begin those flashbacks, the movie opens with a montage of footage of famous black leaders making speeches, (Martin Luther King Jr, Malcolm X, Fred Hampton,) and then cuts to a hotel lobby in Vietnam where four of our characters are meeting up. There’s Otis, Eddie, Melvin, and Paul. Otis and Melvin are played by HBO’s The Wire serious regulars Clarke Peters and Isaiah Whitlock Jr. Then there’s Paul, who is the unofficial lead of this movie, despite it clearly being an ensemble film. Paul is played by Delroy Lindo, who has worked with Lee in the past (Clockers,) but not for some time. This is a cast of talented actors who, for the most part, haven’t become big movie stars, but know how to hold their own.

After their arrival at the hotel, where Eddie offers to pay for everyone, (and we learn that the guys consider him to be a little too rich, and reject his offer,) they head out for the night. We get a scene of them at a Vietnamese bar, meeting the man who will be their chaperone for part of the adventure. And the interactions they have with other characters at the bar are fantastic. First there’s the one-legged Vietnamese man on crutches who comes to their table asking for money. Paul has a reaction to this man, where he just wants the guy away as fast as possible. And then there are the two elderly uncles who buy are guys a round of drinks. Paul again has a problem with this. He notices that the men have been staring at them for some time and is about to freak out when he learns that these are the guys who just bought them a round. Even then, Paul is hesitant to raise a glass to say Thank You, like the other members of his group do.

The night ends with Otis going off to see an old flame, and us learning a little more about his backstory. That’s the one we get answers to right away. The one we have to wait on is Paul. His story is explored gradually throughout the film, as we put the pieces together of why he has so many issues with Vietnamese people, and is so on edge being back here. The next day the men go to meet a businessman who offers to help them get the money (gold bars, also similar to Three Kings,) out of Vietnam. This man is played by Jean Reno, an actor who was so prominent in the nineties with memorable turns in movies like the Professional and Mission Impossible, yet has been absent from the silver screen ever since.

After being joined by an unexpected member of the group, the four men, (now five, matching up with the title of the movie nicely,) head out on a boat and arrive at a town just outside of the location where they will be heading into the jungle. Even before getting here, just on the boat ride, Paul has another conflict, and this one is more of a meltdown than the others, when a Vietnamese man tries to sell him a chicken and refuses to take no for an answer. All of this is great. Paul, as a psychological character dealing with all kinds of issues, is incredibly interesting to watch. And putting the pieces together of how he got this way is also very involving for the audience. Pretty soon after this, the men are off on their jungle quest, and the second half of the movie, the mission half begins.

Things only pickup from here. Like most great movies about a small group of characters in isolation from the world, or trapped in a location together, these men end up turning on each other at different times. One of these involves finding out that one character has taken pills with him, and another one involves finding out that one character brought a gun along. Pretty soon, the men are facing conflict where they have to work together and stop turning on each other. That first comes when one of them steps on a land mine. And both the level of conflict and tension continue to build from there. We get double crosses, character twists, and unexpected reveals. All of it works.

Da Five Bloods is a movie that uses the guise of a simple story (five character buried gold when they in Vietnam decades ago, and have no come back to retrieve it,) to present what is actually an incredibly deep and complex one. It’s not that this movie is confusing in any way, but just that is has many layers or levels. We continue to learn things about the characters as the movie goes on, and even by the end are still learning new things about a number of these characters. It all makes for a pretty amazing story and entertaining movie experience. This one is dramatic at times and brutally suspenseful at others. Seeing Boseman in one of his last roles is pretty great, especially since it is such a memorable and important character is such a great film, (his other movie, Ma Rainey’s Black Bottom, was also pretty fantastic.) For Spike Lee as a filmmaker, this one is definitely an achievement.