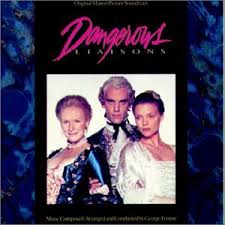 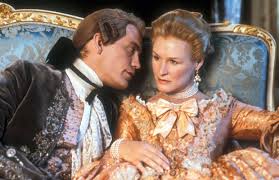 A cross between Shakespere and Cruel Intentions, this movie has some sharp wit and evil intensity, but it definitely starts to drag on in its second half.

A pretty interesting film, this one tells the story of upper class French society during the time before the French revolution, when aristocrats often chose to be single and have affairs in order to prove just how much conquest they were capable of. Such is the case for the two stars of the film, Marquis Merteuil (Glenn Close,) and Vicomte Valmont (John Malkovich.) These two conspire together about who they can toy with and what strings they can pull, challenging each other to take on relationships with others, just to see what the other one is capable of. The story here is the same one used for Cruel Intentions, and while both films follow the same path, the outcomes are quite different. That is completely based on the setting and atmosphere. Both films work on their own, although in the case of Dangerous Liasions, the movie does start to slow down before its end, and it loses some of the momentum that it had in the earlier scenes.

Dangerous Liaisons is the 18th century (1780s) version of Cruel Intentions. Both movies are written from the same original story, and while Cruel Intentions is very loosely adapted to fit into the modern world, Dangerous Liaisons is much closer to the depiction in the novel. It’s a movie about upper class single life and the people who would use their good looks and wealthy social status to manipulate others in the ways of romance. This is the kind of movie that might not be written by Shakespere, but certainly feels very Shakesperian, with its notion of courting others, royalty, family ties, and betrayal. There’s definitely a good story here, involving multiple characters and plot twists. In many ways this story is better suited for a historical European setting than it is for an upper class New York setting, as it was used for in Cruel Intentions.

The story is about people who are so wealthy that they have become bored with life. If you think of the story The Most Dangerous game, or even Hostel, about people who have become uninterested with the activites of common folk, and now just want to know what their money can buy, and how far they can go, then this movie falls right alongside those others. They want to push the limits, and in some cases want to buy the right to kill people. Dangerous Liaisons never goes that far, but it is certainly made in a similar vein. Here, these people aren’t flat out murderers, but they are definitely of the kind who like to see just how evil they can really be, and still get away with it. Here, their game is heartache and the pain that they can cause others. I’m reminded of the movie In The Company of Men, another film about causing intentional heartache. When asked why he did it, one character’s  answer in that film was simply, “because I could.”

The opening of Dangerous Liaisons quickly established the aristocracy and wealth of our main characters. This movie is about people of royalty living in Paris right before the French Revolution. They had all of the wealth, whereas everyone around them had none. The revolution, (and this is right at the time of Marie Antoinette and her “let them eat cake,” quote,) was about commoners rising up against people like these. The start of the movie introduces us to Marquis Merteuil (Glen Close,) and Vicomte Valmont (John Malkovich.) Each of them is waking up in bed to a room full of servants who pamper them in every way imaginable. Examples include being handed cups of tea while still lying flat in bed, having servants dress them, and in the case of Valmont, wearing a face mask while his servings spray his hair.

Merteuil sits in her parlor with another woman, Madame de Volanges (Swoosie Kurtz,) sipping tea and chatting about life. Volanges has a daughter, named Cecile, (Uma Thurman,) who Volanges wants to see wed to a nice young man. Especially while the girl is still a virgin. Valmont arrives and is announced. The ladies receive him (a fancy word for welcome him,) and Valmont sits down with them. Before long, Volanges is gone and now Valmont and Merteuil can really talk. She wants him to ravage Cecil. Apparently Cecil is to be wed to a man who broke up with Merteuil and embarrassed her. This man is under the impression that he is about to marry a virgin bride. Merteuil wants her to be deflowered long before she ever becomes this man’s wife, so that when he does marry her, he becomes a laughing stock of the country.

Valmont rejects the challenge. It all seems too easy for him. Cecile is a young thing who is so innocent and naive in the ways of love that this would hardly take any effort on his part at all. On top of that, he already has another conquest which he is currently pursuing. Valmont is trying to win over a woman who is staying with his aunt, named Madame De Tourvel, (Michele Pfeiffer.) Tourvel is also somewhat innocent, and is also promised to another. Valmont considers her to be a far greater challenge, since she is not nearly as young or naive about the world. What Valmont really wants, however, is Merteuil, herself. He lets her know this and she makes a deal with him. If he can win over Tourvel and get written proof of this, then Merteuil will give herself to him as a reward.

And so, Valmont gets to work. He starts pursuing Madame Torvelle. She wants nothing to do with him. That’s the front she puts on, anyway. Only Valmonts finds out that she has a spy following him each day and reporting on his actions to her. So she is curious about him, but he does not know how far this curiosity goes. Madame Tourvel tells Valmont that she has been warned to stay away from him by a friend, and he suddenly needs to desperately know just who this friend is who would speak ill of him. Valmont sets up an elaborate trap to find out. The man who is his head servant is sleeping with one of the servants of Torvelle, who sees to her mail. Valmont plans it out so that he will burst in on a moment where his head servant is in bed with this woman. He even asks his servant about specific times, making sure that the time he has planned is good for this man. Then he goes through with it, bursting in on them, catching them in the act, and blackmailing the girl into bringing him all letters of Torvelle. This includes both letters she already received, letters she is about to receive, and letters she is trying to send out.

What Valmont finds out from all of this is that Cecil’s mother, Madame Volanges, is the one sending letters to Torvelle, badmouthing him. Now, he suddenly wants his revenge. And so he accepts Merteuil’s original challenge, after all, and sets out to bed Cecil and ruin the reputation of her mother. This turns out to be an elaborate situation as well, involving the stealing of a key from the mothers mantle, which unlocks Cecil’s bedroom door. Valmont does all of this by actually getting Cecil’s help. There is a young man who she has been seeing, Le Chevalier Danceny, (Keanu Reeves,) and Valmont tells Cecil he will help her get the key to this man. Of course what he really does is keep the key for himself, and then sneaks into Cecil’s bedroom one night to convince her to sleep with him instead, (this all borders very closely on rape, with her telling him no, and him refusing to accept her demand.)

Meanwhile, Valmont also decides that it is time to make his final play for Madame Torvelle. This means telling her once and for all that he is in love with her and that if he can’t have her, then he would rather be dead. This fake attempt at self-sacrfice does win her over, and suddenly she lets her guard down and falls for him. The two of them seem very happy together for a little while, until Valmont goes and speaks with Merteuil. She tells him the story of a man who settled into love only to find out that his reputation was being ruined by the woman he chose as a partner. At this point the man broke up with her, repeating the same words, over and over again…”it’s out of my control.” After hearing this story, Valmont goes to see Torvelle and uses the same tactic. He repeats those same words to her, again and again, and this causes her to experience major heartache.

This is around the part where the movie starts to drag. It’s the final fourth of the film, and the time when it should be building up to its highest point. Unfortunately, the characters and storyline has grown tired, and now we are starting to reach that feeling of having had enough. Maybe it’s the way that Valmont finally won Torvelle over, only to quickly pull the rug out from under her. Considering they just recently got together, one has to wonder if maybe his breaking up with her would really have such a strong impact over her. Most likely she would just shrug it off and move on. Still, the movie has Torvelle become very ill over her broken heart and find herself bedridden as servants and doctors comes to wait on her.

Meanwhile, there is a climax that involves Valmont, Mereuil, and also Danceny, (the Reeves character, who was barely in the movie.) Suddenly his role becomes very important, as he finds himself in a deadly duel with Valmont. The ending of this movie is another version of the Cruel Intentions ending that is just not handled as well. While most of this story works better than it did in that film, the final act is the one area where this film absolutely falls short of the other. The duel is less than impressive, and the deadly stakes of it are not made clear enough. Similarly, the ending involving Merteuil seems a bit rushed. The movie was pretty good, but it definitely lost some momentum in the final act. In fact, the very best scene in the film was the first one, with Valmont and Merteuil discussing their evil plans and ideas. Considering that the best scene was the first one, and that the movie got pretty uninteresting by its end, this film definitely had a downward trajectory and got worse as it went on. It was an overall good movie, but it sure did run out of steam before reaching the ending.