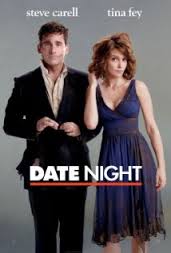 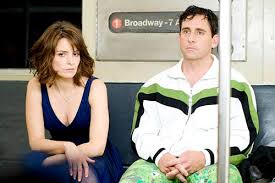 An often funny take on the couple on the run story that starts to get tiresome as it goes on and replaces humor for action.

Date Night is an enjoyable comedy that might be fun while you’re watching it, but leaves you with nothing really creative or new when it’s over. The movie was made as an excuse to get Steve Carrel and Tina Fey together in something that wasn’t just a simple guy meets girl romantic comedy. So instead they took on the formula of an all night in the city, crazy adventure movie, which is a pretty tired formula in itself (After Hours, Adventures in Babysitting, Nick and Norah’s Infinite Playlist.) All of this sounds pretty negative and the truth is the movie is fun while it lasts. You leave it satisfied and thinking it was pretty good.

But after the smallest amount of time has past, from a day to a week to more, you start to realize that there really wasn’t anything memorable about this movie at all. The plot is very simple. Carrel and Fey steal a reservation at a restaurant and pretend to be a couple they’re not and it turns out the couple they are impersonating did some bad things and crossed a lot of serious people. So now there are two hit men after them who work for a mob boss who is connected to a corrupt politician. And the couple is on the run, not knowing where to turn. None of this is new at all.

What is new is seeing Fey and Carrel on the screen together. They play a married couple, Phil and Claire Foster, and they balance each other out pretty well. These two are both extremely funny. Fey is not only a star performer, but also a writer, and Carrel knows all about timing and handling anything from slapstick to black comedy. He’s a natural at this and almost makes it look easy. The combination of the two of them is magnificent.

So for example, it’s not enough that Phil joins his wife in an all women’s book club, but the book happens to be about a young girl getting her first period while in the desert. And so the women are sitting around in the group talking about their periods with Phil wanting to chime in and the women turning their anger on him. The movie could have used a little more of that kind of thing later on.

But it’s much more interested in a plot that will provide for excitement and action, at least on the surface level. I like that it doesn’t rush us off to the restaurant with the hit men too quickly, and at least gives itself time to develop. We get to see them on a date night before this, going to a local restaurant, and also get to spend some time with them in their home lives. We see them at work and around the house and in bed together and by the time they go out for their big night on the town, we feel like we know them a little bit already.

But once the action starts, the movie actually does begin to sink downhill. For example, a detour scene into central park goes nowhere other than to give us the quick gag of them stealing a motorboat that barely moves. And their visits to Holbrooke (Mark Wahlberg) are also a little too one-noted. We get it that Holbrooke doesn’t wear a shirt and that Phil is intimidated by that, but is it worth two different visits to his place for that one joke?

The problem is that the movie runs out of ideas because it is built on such a thin premise. There are certainly funny moments and ideas, like when they pretend to be elite socialites and go back to the restaurant they were in earlier and get the hostess to walk away from her computer so they can check the screen. Their snotty attitudes and over the top gestures are very amusing. In fact, the whole reason this movie works at all is because of the way each one it is uniquely witty and clever with comedy.

Unfortunately, they are the only ones doing anything for this movie. They have no supporting cast with any comedic ability, which is a real shame because a lot of name actors make appearances in this film, such as common, Taraj P Henson, Ray Liotta, Wahlberg, and William Fichtner. But if there is anything to be gained from other cast members or appearances from other actors, it’s by actors who only appear briefly for quick cameos. Like James Franco in his one, quick scene.

As far as the action, the chases, and all that, the movie is just a routine version of the same old film. There is a car chases that’s a lot of fun as two cars get stuck together, but even that is easily forgettable after the movie is over. I like these actors a lot and I do think they deliver in this movie, but the problem is it’s just not enough. There isn’t a plot here that supports them being themselves or improvising at free will and finding what works just through their natural humorous abilities. When we do give them time to find that kind of rhythm, like in the beginning of the movie, things work out well, but more often than not, this movie is just rushing them off from point a to point b so that it can follow a lousy story outline.

And that’s the problem. It’s an action comedy when really these actors would have done better work if it were just a straightforward comedy. The action scenes are in no way great, and so they really just get in the way. There’s no reason to make this a mystery and a corrupt cops, corrupt politicians, scandal movie. If it wants to be the same as every other movie, than that’s the way to go. But considering it’s got these two all stars here together in the same film, the screenwriters really should have trusted them and given them a script that would enable them to improvise more. Instead, we get foot chases, car chases, gun chases, and occasionally some bits of comedy. Those occasional bits are the best thing about the movie.