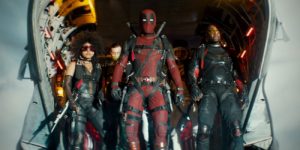 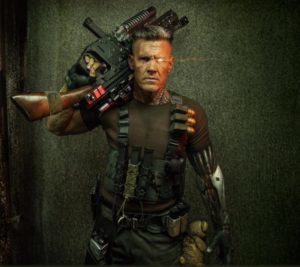 More R rated jokes about superheroes, a team up of action characters, and a fine story make this film pretty worthwhile.

It’s not better then the first movie, but Deadpool 2 is stilll pretty good. Here a film that takes a character and movie that was incredibly original and fresh, and then finds new ways to take it in unique directions. This one works for all sorts of reasons. The humor is fantastic. There are references here to every superhero movie and pop culture idea you could ever want. The action and villain blow those of the first movie away. And the storyline keeps unfolding, giving us more villains and new angles to approach them from. There are a few missteps every now and again, but most of the time this thing is hitting it out of the park. Here’s a movie where nearly every line is a joke, and every other one of those is really funny. And that’s not to mention the great action. The combination makes for a very fun film.

Deadpool 2 is a pretty great movie. It might not be better then the first film, but it has more jokes in some ways, better action. What it doesn’t have is the same level of originality, in the sense that the original Deadpool was the first time we were really seeing that character done right. It was the first R rated superhero movie, (since Blade, which proceeded the Marvel movies, the X-Men movies, and even the Tobey Maguire Spider Man movies.) So the first Deadpool movie was completely fresh and original, and also it had a better love story. Factor all those things together, and it’s basically a love story versus better comedy and action. The better comedy and action has to win.

If the first Deadpool movie went all out with jokes and an R rating, than Deadpool 2 shows us that the first one actually didn’t go nearly as far as we thought it did. Sure the action and blood were pushed to the limit, and so was the cursing, but what was missing were the no holds barred references to other superhero movies and what has been going on in this genre. Deadpool the movie had to prove itself first, before getting access to make fun of whatever it wanted to in the superhero world. That’s why there were no references to any property that wasn’t owned by Fox, in that first movie. With the second movie, anything is game. That includes tons of jokes about the Marvel Cinematic Universe, as well as the DC Extended Universe.

Another example of something that Deadpool 2 improves upon is the villain. In the first movie, the villain was pretty weak. The movie was made on a shoe string budget, and so there was no money for any character who was superhuman at all, (in a villain role.) Instead, they decided to pour all of their money for CGI characters into guys like Colossus (the metal giant X-Men character.) But with the sequel, they know they need a cool villain. And they capture this in a number of ways. First, they give us Cable as the villain of the first half. And then in the second half, we get a villain so cool, that we’ve actually been waiting to see him done right ever since X-Men: The Last Stand. I won’t give away who he is, but let’s just say, this movie uses full CGI to bring the character to life, (which was the mistake made by DC with bringing Steppenwolf to life in Justice League,) but here it turns out to be the right move. This is a character who is larger than life and needs computer effects to get him right.

There’s even a third villain of sorts in the ways of Russell, a kid who has been physically and sexually abused and now has a lot of hate in his heart, (played by the kid who played Ricky Bobby in Hunt For The WIlderpeople.) This is a kid who thinks he’s a badass, even if he’s not. In this case, he’s got mutant powers, where his fists turn to fire, and he can shoot that fire out at enemies. He calls himself Fire Fist. This kid, like Cable, is somewhere in between, in terms of villains, meaning he’s not really good nor bad. At some points our hero, Deadpool, is on the same side as him, and at others, Deadpool opposes him.

And that brings us to another villain… the headmaster. There may not be one big, bad villain whose storyline runs throughout the whole movie, but instead we get four who pop up in different ways throughout the film. It ends up working much better, because what it means is that the story is continuously evolving and bringing us new twists and angles. The last time I remember a villain progression this good was in Batman Begins, (one of the best superhero movies of all time,) with gangster Carmine Falconie leading us to villain Scarecrow, who led us to villain Ra’s Al Ghul. Talk about fixing a mistake from the first film, Deadpool 2 takes the one lousy villain that movie had to offer, and turns it into four pretty interesting villains, with a story that leads us from one of them to the next.

That story begins with Deadpool breaking the fourth wall to talk to the audience, (his trademark routine.) And he does it by hysterically beginning with a music box of Hugh Jackman’s character, Wolverine, spinning around on tree branch that is going through him. This is taken from the end of the last Wolverine movie, Logan. And Deadpool addresses all that, telling us how Logan ripped his movie off, hitching a ride on the coat tails of the first Deadpool movie. First it went for an R rating, just like Deadpool did. And then Logan had the audacity to die in the movie. Deadpool promises us that he’s gonna die too, in this one. And then he goes on to reference other R rated movies, and how Deadpool is the second highest grossing R rated movie in the world, (behind The Passion of the Christ.) This self-aware, meta discussion about box office results is pretty funny, and a great way to open the movie.

And then we see what Deadpool has been up to, in a montage that shows him taking on all sorts of gangsters and hitmen, including warriors in kimonos who fight him at a bath house in Japan. Everything is going great until one of the targets he has gone after now comes and finds him. A gangster and his goons show up at Wade Wilson (Deadpool’s home,) and while Deadpool takes most of them out by carrying around a knife block, and throwing one knife at them after another, there’s one bullet that he can’t stop. It’s from a guy who shows up in the room after Deadpool thinks it’s all over, and he has taken everyone out. The bullet hits and kills his girlfriend from the last movie, Vanessa. And yes, this “fridging the girlfriend,” scene does give Deadpool the typical motivation for seeking vengeance throughout the rest of the movie, but it actually fits this film pretty nicely.

You see, instead of just becoming the story of Deadpool seeking vengeance on the guys who killed his girlfriend, this event really motivates Deadpool to open up his heart and help out a kid. He and Vanessa were talking about having a kid, and now Deadpool has the chance to sort of become an adoptive dad. The kid in question is Russell. Deadpool wants to help this kid out, only Cable shows up to kill the kid before Deadpool really has a chance. Cable (Josh Brolin, having the best year of his life with this movie, Thanos in Avengers, and Sicario 2 later on this year,) breaks into the prison / home where Russell is being held, using his metal arm and futuristic technology. Cable arrives from the future hunting a kid, (just like the villain in Terminator 2,) and yes, references are indeed made to that movie.

After Deadpool loses to Cable in their first brawl, he decides to recruit a team to help him out. On the one hand, Deadpool doesn’t seem like the kind of character who would recruit a team. On the other hand, he did recruit Colossus and Negasonic Teenage Warhead to help him in the first movie, so it’s fine. And the superhero team scenes featuring a handful of misfits as members, are a lot of fun. The team is X-Force, and we watch them during casting call interviews and tryouts all the way to their skydiving debut. And then, not long after this, we are back squaring off against Cable during the convoy action scene, which is fantastic. The best thing about this scene has got to be Domino and all the craziness that goes on around her, without her ever getting hurt.

The action in Deadpool 2 is fantastic and far superior to any action we got in the original Deadpool film. Credit that to director David Leitch, from the first John Wick movie, who clearly has some skill with amazing stunts and action. Here, Leitch absolutely delivers with some very well-choreographed sequences. And then there’s the humor, which is so on the money, that it basically goes after everything, leaving no stone unturned. The Marvel references include cracks about Black Widow, Black Panther, The Winter Soldier, Hawkeye, and Thanos. The DC references include the darkness of the DCEU, and a great crack about finding out another character’s mother’s name is Martha, (a spoof on Batman Vs Supermen.) And then there are tons of references to the X-Men, including a great cameo appearance. And if you think the jokes contained in the movie are funny, just wait until the post credits scene, which takes meta to a whole new level. Sometimes the humor goes a little too far into potty humor, and sometimes the action is overly gory to the point of being a turn off, but most of the time this movie is busy delivering, giving us some great jokes, some cool action, or both at the same time.