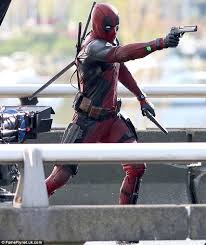 A pretty good superhero movie with a fast pace, and both smart action and humor.

A movie that works on all kinds of levels, most of all, because of how simple and witty it is. The simple part comes from the plot. This movie is trying to show that all the glamor and story twists are unnecessay. It lives and dies on action, humor, and pacing, and proves the point that those things are really all that you need. What the story does do nicely is fracture the narrative in such a way that it keeps diving back onto a single scene, (the highway car attack,) and showing the next part of it, bit by bit. So there are lots of flashbacks here, cutting that scene up, to explain how the movie got to this part. But the best thing about the film is absolutely the humor. The one-liners shoot out at a mile a minute, and a great majority of them actually stick. One of the best things about the film is the relationship between Wade Wilson (Ryan Reynolds,) and his girlfriend, Vanessa. The two of them are perfect together, both smart-asses who share the same sense of humor about life and all of its horrors. The sequence where they meet, then play skee ball, then go on a holdiay marathon of sorts, is fantastic. Just the meeting scene alone, where they trade stories at a rapid speed, is great. These two, together, make up the heart of the movie. Between that, the humor, and the action, (just the right amount of it too,) this movie has got it all. Even the pacing is perfect, making sure to not be overlong and just stick to the points, knowing that audiences today get bored easily. This movie is smart the whole way through.

Deadpool is the runaway superhero smash sensation of a new era. This is the movie that could possibly change the game of the superhero playing field to usher in R rated films in this genre. Now, there have been R rated superhero movies before, but none has ever been made with this level of energy, and none has ever done this well. Let’s just say Deadpool is already the highest grossing X-Men movie, (although many will not actually consider it an X-Men movie, and for good reason. It’s not. It’s a spinoff.) The movie works because it is more than just an action film with some hard R violence. It is also a comedy.

This is the movie that Ryan Reynolds has been trying to get made for over a decade. He is actually the one who hired the writers to pen the script. Reynolds wanted to make this movie long before he took on the role in X-Men Origins: Wolverine. He accepted the role in that film simply because he knew if he didn’t take it, then someone else would, and that if he did take it (even though he knew it was all wrong,) maybe it would one day lead to this. He was right. About five years ago, Reynolds starred in a short film where he played Deadpool for one action scene. It is was made as test footage, just to see if there was a market for this film. It definitely worked.

The movie delivers on its R rating. That means not only cool and bloody violence, but also vulgar humor, language, and sex. This is the real deal. It’s not Basic Instinct or anything, but it’s certainly a lot more hardcore than the Blade films, The Crow, or the Matrix movies ever were. This movie takes full advantage of its R rating and really pushes the boundaries of what it can get away with. When characters get into car accidents, for example, body parts get ripped off. Characters actually die. This is realism, right in your face. It’s not pretty, but it is certainly a lot of fun.

The humor comes from a hero that constantly spews one-liners. They don’t all work, but what’s nice is that there’s so many of them, traveling at a blink and you missed it nanosecond, that there are plenty of jokes there, left unheard, just waiting for a second viewing. The one-liner business works, and despite what you might think, it never really gets tiresome. Maybe that’s because there are so many different characters who Wade Wilson gets to shoot them back and forth with. There’s his bartender friend, played by TJ Miller. There’s the old woman who he shares an apartment with. And best of all, there’s Vanessa (Morena Bacarin.) You would think that TJ Miller would nail the witty and insulting dialogue the best, coming off his role in the show Silicon Valley, where he steals every single episode. Only here, in Deadpool, he’s not playing anything close to the same character as he does there. He’s not the cool guy here. Wilson is. Miller, instead, is kind of low key and quiet. But Vanessa more than makes up for it. Her banter with Wilson is fantastic. The two of them, discussing childhood horror stories upon their first meeting, and putting a humorous spin on them, is fantastic.

Vanessa is not your typical damsel in distress (as she points out.) She’s a stripper who has been through all kinds of sexual and physical abuse.  She is no innocent cookie in need of saving. Sure, she does get kidnapped and need Deadpool to come rescue her, but she also manages to hold her own against the forces that threaten her, much like how Gwen Stacey, as played by Emma Stone in the Andrew Garfield, Amazing Spider Man films, was a very independent woman character who could handle herself and find her own solutions. Baccarrin and Reynolds are fantastic together. They have some really great scenes in the first half of the film, including a sexual holiday montage that is very funny.

Following the series of scenes that feature Vanessa, we move straight into the plot. The movie literally has everything going great, and then Wilson, (speaking to the camera via voice over,) tells us it’s time for something to go wrong. And it does. He gets cancer. Then he meets a villain who will operate on him to alter his cells, turn him into a mutant, and save his life. Only this guy isn’t out to make Wilson into a super hero. He wants to make him a super slave. That’s when Wilson has to escape. Once he does, the villain goes and kidnaps Wilson’s girlfriend. The whole thing is a little too simple, and very much like the story lines of the Wolverine movies with William Stryker. First he turns Wolverine into a weapon, than he shows his true evil side, and then Wolverine has to go after him. For some reason, these heroes are never happy with the villain for making them the way they are. In Deadpool’s case, for example, Wilson was going to die of cancer. And now he’s not. The villain saved him. Sure it involved torturing him and destroying Wilson’s face, but the cancer is gone and his life has been spared. Shouldn’t that be worth something?

The action is pretty strong, and while there aren’t a whole lot of action scenes, there’s really just the right amount. This movie  finds ways to make them each feel longer than they actually are. The film was made on a very moderate budget that was about half of the budget for most X-Men movies. The result was only about three action scenes. Funny enough, this movie was brought to us by the same studio who bombed with the Josh Trank directed Fantastic Four, and that film was also made on a very limited budget with a limited amount of action scenes too. The difference is that while in the Fanstastic Four, the action scenes were basically just thrown together, in Deadpool they are pretty carfeully constructed. Now, this isn’t state of the art choreography like we get on the Netflix show Daredevil, or anything, but it’s still pretty good. The movie is clever about its action scenes, cutting them up into pieces and stretching them out over different lengths of time. That’s what happens with the opening highway action scene, anyway. We see it in slow motion and bullet-time freeze frame during the opening credits. Then we start the movie with the events of the scene, watching the action unfold in realtime. This is followed by a cut and a flashback to how everything started. It isn’t until halfway through the movie that we return to the highway for the rest of this scene.

By doing that, the movie accomplishes a number of goals. First, it stretches out a single action scene to feel like a number of different scenes, when really it is all the same one. Nice and clever use of a limited budget. Secondly, it fractures the narrative in such a way that most films only use for bookends, at the beginning and end. We’ve seen movies that open with a shot of the climax, before going back in time to start at the beginning of the story, again and again. This is not one of those films. It doesn’t show us the climax. We don’t have to wait until the end of the movie to return to the highway scene. That happens about halfway through.

This fracturing of the narrative works out really well. We keep diving back to the same scene, on the highway, and it’s like a focal point, where we know exactly where we are and what we are doing there. But the flashbacks just keep informing us even more, and they help. The result of all this is that this one highway scene ends up feeling like three different action scenes. Smart way of saving money and getting the most out of it. What’s also nice is that this movie is exactly the right length. It knows that today’s audiences get bored easily and that everything needs to have a purpose and be to the point. So instead of getting long action scenes, where the viewer might check out after a while, we get quick montages, (like one including a zamboni machine.) It’s a nice touch.

Deadpool works for all sorts of reasons. There’s the pacing, the action, and most of all the humor. Having an R rating really goes a long way here. It completley changes the landscape of the film in terms of how far the humor can be pushed, and also the overall content of the jokes. All of a sudden we have a movie with the freedom to go as far as it wants. This is the Superbad of action movies. The storyline is smart and to the point. There are no elaborate twists here, or psychological dramatic scenes, and the movie is almost out to make the point that those sorts of moments are unnecessary. This film is about being fun, and really nothing more. With that as its goal, the film is a definite success.