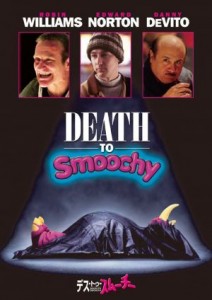 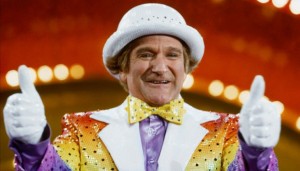 Occasionally funny, this movie is dark and somewhat interesting, but it’s also exactly what you’d expect, with very little surprise.

This movie is okay. it is dark and colorful at the same time, much like a tim burton film. that is to say the tone is dark and the things that happen are dark, but the look of the film is always colorful and the contrast of those two things creates a strange look. the storyline is somewhat interesting, as a former children’s television show host plots revenge against the new kid in town who has taken over his gig. the problem is that most of the time the movie is not very funny. some jokes work, but a majority of them fall flat. on top of that, the film is also very predictable. the premise is cool, and there are a number of catchy scenes here, but at the same time, a lot of this movie just does not work.

Death To Smoochy is a weird movie. that’s not especially surprising considering that it was directed by danny devito. this guy hasn’t made many movies as a director, but some of the few that he has are definitely memorable. war of the roses and throw momma from a train are both startlingly odd. they are both incredibly dark and bizarre. Death To Smoochy might be the third movie devito made that is pretty decent, but it definitely doesn’t make it to the same category as those other films. this one straddles the line between good and bad, throughout it’s duration, and never quite makes it over to either side.

the movie is dark, just like all of devito’s films. but this one is dark in a colorful way, which is very strange. it feels kind of like a tim burton movie in that way. dark tone, but bright colors. the humor is pretty average. some of the jokes work, but most don’t. that’s because robin williams isn’t quite right for his part, and he certainly isn’t very funny here.

the movie is about a children’s television show host who takes bribes to put kids on his show. this is rainbow randolph, played by williams. when his scheme is discovered by the public, he is swiftly fired from his gig, and the network looks to quickly replace him. john stewart and catherine keener are the executives handling this, and they find edward norton, sheldon mopes. he goes to hospitals to visit drug users and sing in a purple rhino outfit about how great life is.

the drug using material is pretty funny in this movie. i love how important it is to mopes to stop junkies and try to help them. he ends up talking to kids about it, broadcasting about it on his children’s tv show, and always mentioning it in conversation when a charity event comes up. the idea that this guy never realizes the topic is innappropriate or too grown-up for kids, is quite hilarious.

mopes replaces randolph on the kids tv network and gets his own show immediately. his tv show persona is smoochy, a big, purple elephant. everything seems to be going great for mopes, who refuses to sell out and do advertisements of any kind just for money. that’s when randolph resurfaces to enact vengeance.

robin williams is the main character in this movie, but he’s also the villain. it’s one of those films where the hero is a down and out guy who does awful things and we support him because he is funny and relatable. bad santa and bad teachers are other quick examples of this. it’s the anti-hero. the guy who is the exact opposite of the golden boy superhero, there to save the day. williams plays the part fine, but the humor in it is just not there.

the movie features a number of schemes that randolph pulls in order to get smoochy fired. first, he fixes a bowl of cookies that sheldon is about to pass out to kids, with cookies in the shape of a penis. when he takes one of these cookies out on leave tv, and everyone sees it and gasps, smoochy has to quickly come up with some justification of what it is. he turns the cookie into a rocket ship.

another funny moment has randolph set shelton up by anonymously asking the rhino to go to a charity event, then showing up disguised as the limo driver, ready to bring shelton there. the flood lights are so bright, once shelton gets on stage, that he can’t see anything. once those lights go off, however, shelton sees who his audience is, and it’s enough to get him into a whole lot of trouble.

while these quick gags are somewhat funny, the movie has a whole ton of jokes that don’t work at all. there’s a lot about mafia bosses and hitmen and gangs here, all working behind the scenes, and most of it is pretty dopey. there;s a woman gang boss who has an adult son that she wants featured on the show. the problem is, this guy is practically brain-dead. robin williams is okay as the protagonist, and ed norton as the innocent dreamer shelton, is actually pretty good.

it’s the story about the corruption at the studio that doesn’t really work. everyone wants shelton to sell out and do things for money, and when he refuses, he becomes a target. it’s an okay movie with a decent enough plot (although the ending is incredibly predictable,) but there aren’t too many memorable or special scenes worthy of complimenting. instead, this movie is just okay, and never really goes for it, delving into the dark place, as much as it should.