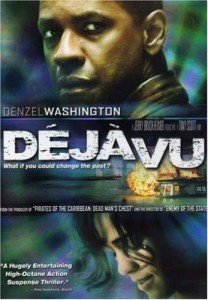 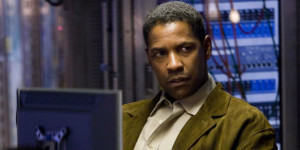 It’s Frequency meets Enemy of the State, and the ideas of both of those films are massively taken to the next level with this high concept futuristic mystery.

For most of this movie, things are pretty cool. The first third of the film sets up a mystery and a whole ton of questions and clues. It gives us ideas to make us wonder and feed our curiosity about the strange circumstances surrounding a ferry bombing. The second third gets even better. Here’s where some really cool state of the art technology gets put into play where we can view the past while it is happening, exactly three days after it happened, (a little confusing, huh?) Let’s just say, the  movie takes the time to explain how this works, and gets us believing in it. And then the movie breaks its own rules. That’s the final third. It breaks the rules and goes for a cop-out ending on multiple levels. So two thirds are fantastic and the last third is not. Still a cool movie, but the final act isn’t up to the same caliber as the rest of the film.

Denzel Washington and director Tony Scott have both been dabbing in futuristic technology-based thrillers for sometime now. With Denzel, it was Virtuosity, back in the nineties, that got him started.  With Scott, it was Enemy of the State. Together they ended up making this project, Deja Vu, and it’s definitely better than those other films, mainly because it expands on the movies and ideas that came before, and takes them to a much more interesting level.

There are so many connections and spheres of influence at play here that even the guy who plays the villain in Deja Vu, Jim Caviezel, was the star of a pretty good, futuristic technology-based thriller, himself…Frequency. And for Washington and Scott, it marks the fifth time these two have worked together. With Crimson Tide, Man on Fire, The Taking of Pelham 1,2,3,  and Unstoppable, the films that these two made together started out great and got progressively worse. Deja Vu came right before Pelham, which is to say right when Scott’s films were at the point of no longer being great, but also, not yet lousy. And Deja Vu is exactly that. It’s good, but not great, and certainly nowhere near the caliber of a Crimson Tide (not to mention Scott’s earlier work, like Top Gun, True Romance, and The Last Boyscout.)

With Deja Vu, what we are served up is a time-bending thriller. You better believe this movie shows us the usual example of putting two holes in a piece of paper and then folding it together, so that the holes line up. Twice. It’s the same example we’ve seen in Event Horizon and countless other films, only Deja Vu might be the first movie to really and fully explain it. This film talks about parallel timelines and what happens to the other timeline once you change things in the first. The answer is that the other timeline disappears or ceases to exist (according to this movie.) It’s pretty cool stuff, and this movie definitely gets into it, holding nothing back.

And that might also be part of the problem. The first two thirds of the film are fantastic, but the final third goes too far and commits a cardinal sin of storytelling…it breaks its own rules. We can suspend believability to go with the rules the movie tells us, but once it tells us things and then breaks them, it’s going too far. That’s where the time travel element comes in. Long before that, however, the movie is about a ferry bombing in New Orleans. Doug Carlin (Washington,) an ATF agent, (Alcohol,  Tobacco, and Firearms,) is the one running the investigation. Forget the obvious question about what an ATF agent has to do with this investigation and why it’s not the FBI running the show (although the movie disguises that by having Bruce Greenwood step up to the plate as the FBI big boss who only pops up when it’s convenient to be checking up on Carlin.) This movie doesn’t have time for technicalities like that. It’s got the world of the future to play with and to manipulate at free will.

Carlin spends his time searching the site and aftermath of the ferry bomb. He finds the body of a beautiful woman named Claire (Paula Patton,) washed up on the shore, covered in burns. The body is also missing its fingers. On top of that, Carlin also receives a message on his answering machine, from Claire, that was left for him earlier that morning. And there’s more. Carlin’ partner, Larry Minetti, was supposed to be away on vacation, but instead, his car turns up on the ferry, meaning that he was on the ferry when it blew up. So the clues of a mystery are definitely set into place.

Carlin goes to Claire’s house. He finds bloody tissues in the garbage, a phone message where Claire picks up the phone and asks her friend if this call is a joke (all while it is bring recorded,) and a spelled out message on the refrigerator that says “U can save her.” So the clues that there is a mystery at hand are definitely set in place. And one by one, throughout the course of the film, each one of them will get explained and answered.

After we get all the clues and are made fully aware of what we should be looking for and trying to find answers about, we are brought into the world of the technology. This is where the movie starts to get cool. There’s a new unit working with the FBI that has the ability to look back in time anywhere, exactly three days ago. The technology works by satellite cameras and can go through walls and inside buildings. It can show the technicians watching it conversations that happened during that time. There’s just one catch. The technicians have no control of it. They can’t pause it and they can’t rewind it. It’s like a live steaming situation, always moving forward.

The idea here, is that they can find the killer by watching Claire in the three days before the killer attacked. They are looking for who the killer is, when he contacted her, and what he was up to. The watching of Claire gets kind of creepy and stalker-ish at times, especially when she’s taking a shower. But then something interesting happens. Carlin aims a laser pointer at the screen and Claire reacts to it. This means the technicians aren’t just watching a replay of the past, but something that is going on right now in an alternate timeline. It leads them to experiment by sending something back in time. A note. And this is really neat. But it’s also as far as the rule-breaking should have ever gone.

I understand that a movie needs to up the ante as it goes on, and raise the stakes, the tension and suspense, but then it should never have established certain rules. The technicians make it clear, in the first half of the film, that time travel is impossible for a living thing, and then in the final third if the film it throws those rules out the window. The reason why this is such a problem is because throughout most of the movie we’re sitting there wondering how Carlin is going to save the day. How is he going to get a message back to his former self and get his former self to change the future? And then to learn that he simply jumps back through time leaves us feeling cheated.

When the movie featured the sending of a note back through time, it was the right idea. Using actual time travel makes this the same as every other movie, but the note idea gave it something unique. And then, of course, that was all thrown away. Maybe they should have tried a phone message or something.  Thr note turned out to have a single purpose, about Carlin’s partner and nothing more. And that was another mistake. We are meant to only care about Carlin saving Claire, by the end of the movie, and not bat an eyelash about what happens to his partner. It’s kind of a mess. The mission was always just to investigate the bombing and to catch the guy who did it,  and then suddenly it’s all about going back in time to save one of the victims. All of these rule changes and mission changes cost the film deeply. What we have here is two thirds of a great film and then a final third that drops the ball.