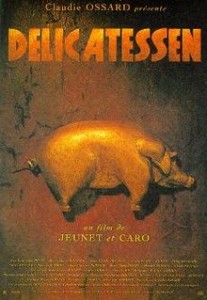 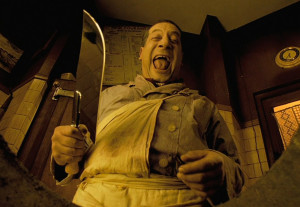 A very intriguing premise turns into an interesting, yet somewhat slow-paced film

Delicatessen is a pretty fascinating movie. especially in it’s premise. the movie is about a small deli / butcher shop where the butcher actually kills people and serves them up to his customers. the idea here is that times are bad and this is the only way that the butcher can make money. the meat that he is serving is basically free from him to get. he just has to wait in his building until someone who lives there sneaks out at night and then he pounces on them. the butcher lives and works in the same building. it’s an apartment building on top of the butcher shop, and all of the people who live there know about what this man does to his victims.

the people who live in the apartment don’t dare come out at night. that’s the only time the butcher strikes because the shop is closed and the streets are empty. and since the people of the apartment know better than to put themselves at risk, the butcher has to hire assistants to come and work for him, unaware of what will happen to them if they try to go out at night. this is the premise for the movie. it’s certainly creative, but it also could have easily been the storyline to a short. is there really enough here for a feature length movie? not quite. but this movie certainly tries to make it work, and in many ways it succeeds.

for one thing, the movie opens up with a fantastic introduction that shows the butcher killing his latest victim. the first shot of the film is of the delicatessen sign, swinging back and forth with the wind, as it hangs over the door. we move past it, pushing into the entranceway of the shop and get in close to the sharpening of butcher knives, never seeing the face of the person sharpening them. then we start hearing noises and the camera takes us right into a pipe, where the butcher can hear what is going on in the apartments above him. he knows that somebody is going out.

a man dressed in a strange costume, all wrapped around him and taped up, tries to escape the building. he hides in a garbage can right outside, and we get to see his point of view as he lifts his head out of the can and looks around. then the lid is lifted off him and the butcher is right there throwing knives into the can. that’s how the introduction ends. it’s a hell of a sequence, including some fantastic zoom-ins and carefully structured shots. and it leads us into the rest of the movie, having established what this deli is all about and what goes on here at night.

the real movie begins after this introduction. we meet louison, a young man who comes to work for the butcher, named clapet. louison is a former stage performer who used to have an act with a monkey, that he performed while dressed as a clown. now, he just wants to live in peace, away from the attention. he quickly develops feelings for clapet’s daughter, julie, and she seems to like him as well. that’s where the problems begin.

clapet notices right away that there is something going on between louison and julie, and he does not like it. apparently julie has had feelings for other men that have worked for her father in the past, and they have all ended up dead at her father’s hands. she does not want this to happen to louison and tells him that he must quit the job and leave the apartment. he doesn’t know why she is trying to get rid of him, since she appears to like him, and so he laughingly refuses to go anywhere.

this is basically the story of the three main characters. she wants him to go, but refuses to tell him the reason why. he won’t leave because he doesn’t see a reason to go anywhere. and clapet eagerly waits for an opportunity to strike. for over three quarters of the movie, this is all that happens to the three of them. now there are other things happening with other characters, which thankfully helps keep our attention.

there is one couple that lives in the apartment, where the woman wants to kill herself. instead of simply going ahead, she devices clever ways, like booby-traps. one object has to start moving in order for the next to move, and eventually it will lead to her being killed. there’s one, for example, where she sits in a bathtub waiting for an iron to fall in. the iron is resting on a piece of cloth. the cloth will be pulled once a sewing machine starts. and the sewing machine will start once the doorbell is rung. this stuff is pretty clever. the movie is a comedy, and this is the sort of scene that makes us laugh. especially with how it ends.

another funny scene plays with sound, as clapet makes love to his wife on a squeaky mattress with springboards that are so loud the entire apartment can hear them. and so everyone in the building does some kind of action to the same rhythm as the mattress. julie, for example, plays the cello. another woman bangs a sheet to get the dust out. louison rolls paint onto the ceiling, moving back and forth off of a ladder that he is attached to. it’s like a charlie chaplin routine, only with sound, as opposed to just physical action.

the movie has a lot of fun things going on like that. between the storyline about the butcher trying to make a kill, and the romance going on between louison and his daughter, we have an entertaining initial story. and then there are all of those extra fun scenes thrown in there, that might not push the story forward, but do make us laugh. there’s a cool knife here called “the australian,” which pretty much works like a boomerang, and also an organization of underground workers that are called in to stop clapet and end up being more helpless than the characters who called them. with all this going on, there are still moments in this movie that feel slow, but ultimately it is a pretty unique and catchy film.