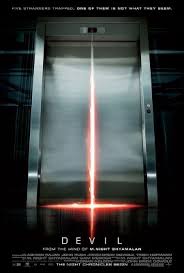 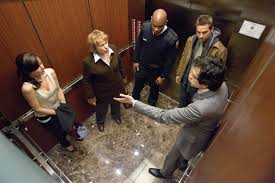 A much cooler movie than expected, with the mystery being who these people are, and which one of them might be a killer.

M. Night Shamalan didn’t direct this movie, he only produced it, and yet it’s by far the best thing he’s even been associated with since he made unbreakable, his follow-up to the sixth sense. Finally, this guy comes in contact with something that is semi-plausible. There are no aliens or plants killing people, or whatever the hell were going on the village, or giant fairy tale beasts out to kill mermaids. This is a movie about real people in a sort of horror movie / thriller situation, and it executes its formula almost perfectly.

The premise is intentionally kept very simple. At least on the surface. A man commits suicide by jumping off a building. While the police are outside investigating, five strangers get into an elevator together. The elevator gets stuck. And then the fun begins.

Every time the lights go out, something happens. The first time, the attractive woman in the elevator thinks one of the guys grabbed her ass. The next time, that same woman gets cut badly and one of the men has blood on him. As it continues, some of the people in the elevator start dying.

All of this moving around the building helps us to not feel too claustrophobic, like we would if the whole movie took place with inside the elevator with those people. We’d end up feeling like we were the ones in there and it would be pretty torturous. But instead, the movie makes the building the focus, giving us a rainy afternoon and then night outside. The best one-day or one night, trapped inside a building movies always have it raining outside. Clue is my favorite of the bunch, but they probably go all the way back to Akira Kurosawa’s Rashomon. And it always works like a charm to create the feeling that we are stuck here, inside this place, secure from the rain. And rain, thunder, lightning, and all that always add to the creepy atmosphere.

As the movie goes on, we learn a good amount about the characters involved. The detective has the most back-story, and we learn before he even gets to the building about how his wife and son were killed some years ago by a hit and run driver. Later on, we learn about the lousy note the driver left. And now, the detective investigates these people, trying to find out whom he’s watching in the elevator.

As it turns out, each person in the elevator has a story and each story is somewhat of a mystery that would lead one to think that he or she is quite possibly a killer. There are all kinds of strange things happening with those people who are in the elevator and what they did before they got in there. The detective goes through security tapes of the lobby of the building to try to make sense of whatever he can. And there are a whole bunch of red herrings, each one filled with edge of your seat tension that this person is the killer.

The movie also does a nice job of letting us know that this all has something to do with the Devil. That angle could have been tricky; because a movie about a bunch of people trapped in an elevator with them dying one by one could easily just be a sort of serial killer movie. But this movie finds clever ways to convince us that it is something more than that. It opens, for example, with shots around the streets of Philadelphia. Only the shots aren’t really of the streets. They’re of the buildings, upside down, with the sky on the bottom of the screen and bridges and skyscrapers on the top. It’s pretty surreal and makes you feel like some force, like the Devil is the one watching the world in this way.

And then there’s the voice over of one of the security guards telling stories about the Devil. He basically narrates the movie and tells of the legends he heard from his mother when he was a boy. He tells of how it always starts and the different rules of what happens when he is near. He even tells how it will end, but that doesn’t really matter. There are so many twists and surprises here that even knowing one or two barely makes a difference. I knew a major one going in, about which one of the characters in the elevator was, and it still made no difference at all. The movie just had too many thrills going on for a single one of them to take something away from it.

The trapped in a building with rain pounding down outside premise along with the stuck in an elevator where every time the lights go out, someone else dies, ideas were all very cool. And the movie did a really nice job with using music to create tension. This was basically a modern spin on Agatha Christie’s “And Then There Were None,” with a supernatural twist, and it worked really well. What didn’t work so great was the ending. It just felt too forced and too neatly packaged together. But for ninety percent of this movie, things were pretty intense. Who would have thought a movie with such a simple premise on the surface would turn out to be so much fun?