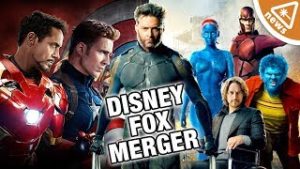 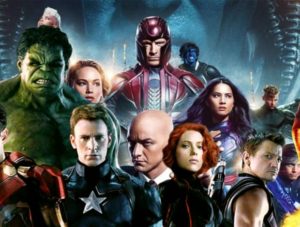 It happened. Disney has bought Fox. All Fox properties (X-Men, Die Hard, Aliens, Avatar,) are now Disney properties.  Whereas there were once five major movie studios (Warner Brothers, Paramount, Universal, Disney, Fox,) now there are only four. It’s not a monopoly, but it sure feels like one when it comes to the superhero game.

Here’s why…Disney is the studio that has the Marvel Cinematic Universe (The MCU.) Fox has the X-Men and Fantastic Four. Sony has Spider Man. Now, a few years ago, Sony and Marvel made a deal to start connecting Spider Man with the Marvel films. So far we’ve gotten two movies that merged these worlds together… Captain America: Civil War and Spider Man: Homecoming. If you’re keeping track, that means the only Marvel comic book characters not connected to the MCU were the ones owned by Fox (X Men, Fantastic Four.) And now they are.

So, what does this mean? It means the floodgates are opened and the possibilities are endless. It means we could actually see the X-Men and the Avengers in the same movie. It means Deadpool can make fun of this merger, and how many different Spider Mans or Hulks there have been, or how Tony Stark is supposed to be an alcoholic, but it’s Disney, and so we will never get to see that.

Let’s take the possibilities and start looking at them one at a time. First up, what is to be done with the X-Men, aka Fox’s most successful superhero franchise…

Crossing the X-Men into the MCU is going to be the biggest challenge of all. These are the characters that everyone knows and loves. The way to do it is with a post credits scene at the end of the Avengers 4. Something with Magnetos helmet, or Cerebro, or maybe the Avengers hearing about a school in Westchester where mutants are being trained.

Let this be the first time we hear the word “mutants,” uttered in the MCU too. Yeah, that’s a thing. A single word that was actually banned from MCU movies until now. Boy did things get petty, (just wait until we start talking about Fantastic Four comics.) Regarding the post credits scene, you can’t really have an actor cameo here, because when the X-Men do come to the MCU, it’s got to be a reboot, (so all new actors.)

Think of it in terms of what Marvel did with Spider Man. They rebooted it with a new actor, and instead of a solo movie first, threw him in with other already established characters.  And even when they made a solo Spider Man movie, Robert Downey Jrs Iron Man, (the most iconic character in the MCU,) was along for the ride.

And that’s what they should do with X-Men. Have another characters movie that starts bringing the X Men in. If Captain America: Civil War introduced us to two new characters, (Black Panther and Spider Man,) then why can’t another hero’s movie, (like Doctor Strange 2,  for example,) introduce us to two X Men? Like Charles Xavier and Jean Grey.

And after that, the floodgates are opened and it’s time to make another X Men movie. Only this time, have Wolverine barely in it. Put some time in between Hugh Jackman and whoever will play the new Wolverine. The more time, the more the buildup. But that’s how you get X Men going. And yes, one day there should be an X Men Vs The Avengers movie. But not for a long, long time.

Here are the comic book characters that movies just couldn’t get right. And boy did they try. The first real attempt featured a goofy, campy, colorful crew. Think Batman and Robin without all the lame one-liners. Still, it was pretty bad, and the humor was awful.

There were two films with that cast. A Fantastic Four movie and then it’s sequel. After that, the Fantastic Four went away for about ten years, and then we got the lousy Josh Trank take on the franchise which was so dark, and so clouded in stories of Trank’s on set meltdowns, that there was no surviving it. This wasn’t the worst movie in the world, (it might be slightly better than the first two versions,) but it certainly got treated like it was. With no humor, no color, and a ton cut out, this movie really fell short of the mark.

But now, Marvel has the chance to bring The Fantastic Four back. And it might take a while (the Marvel movie calendar is already covered for the next three years or so,) but we’ll see the Marvel version at some point. Just like we did with Spider Man. And they didn’t wait all that long after the Andrew Garfield versions to bring in their much younger take on the character.

To do Fantastic Four right, maybe they should try setting it in the sixties (when the. comic was published,) just like X Men First Class. Or not. Another idea is to have Peter Parker be a student of Reed Richards (Mr. Fantastic,) in Spider Man Homecoming 2, or whatever the sequel movie is titled. If they do it in the sixties, then maybe show Captain America in the background, (on TV in an ad,) to ground this in a time that connects to the MCU. Worry about how to get them into the present day later (maybe they don’t age because of their powers. It certainly worked for X-Men (Professor X, Mystique, Magneto, and Beast are all in the nineties movie looking the same as they did in the sixties movie,, minus the Professor’s hair..)

After that, the next idea is to bring in The Silver Surfer and Galactus. They might actually want to try doing this before rebooting the Fantastic Four. Maybe even X Men too. You see, The Silver Surfer and Galactus have untapped potential, whereas the general public is familiar with the other versions at the movies. But these two are ready to go, and pretty amazing characters too. Galactus is the ultimate villain (even more than Thanos.) Let’s put it this way… Thanos can throw a planet, but Galactus… he eats planets for breakfast. Literally.

And then finally, one day, maybe we get an X-Men Vs The Avengers. It would sure be putting all their eggs into one basket, but isn’t that what Marvel did with the Avengers, (bringing in all of their characters,) and then with Avengers Infinity War (merging their older characters with their newer characters, like the Guardians of the Galaxy.) It will happen one day. But not for a long while.