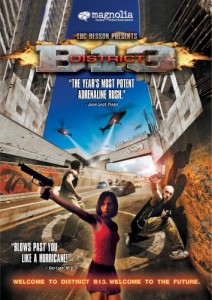 It’s Run Lola Run meets Ong Bak, with the best qualities of each of them mixed into one. that makes for one hell of an exciting combination.

District B13 is a movie that is not about plot or character. it’s a movie that is about style. Just like run lola run. it’s about technique. the director, Piere Morel was just getting started when he made this movie. this was his breakthrough before he came to america to make the outstanding Liam Neeson thriller Taken. And it is District B 13 that got him to make taken by showing off exactly what he could do.

the movie has a very standard plot, the likes of which we’ve seen a thousand times before. the crime situation has gotten so bad in the future, that an area of city block has been quarantined and surrounded by a gate, where all the worst criminals now live. it’s escape from new york to the 100th degree. there have been so many examples of this storyline in the past, such as no escape, that it’s almost difficult to come up with anything new in the genre. but this movie somehow does.

that’s because it’s not about the plot. it’s about the action. the idea is that there are two men who have to go into the district and find a bomb that is being held by the biggest drug lord. then they have to diffuse it. all standard stuff. but what makes this movie special is the way it takes this generic plot and approaches it. the movie does not start out with the mission, and in fact does not even mention the bomb until nearly halfway through.

instead, the film begins with some of the drug lord’s men coming to an apartment building to kill a man Leito, a man who has stolen a ton of product from them. the leader of this pack, a heavy man named k2, has to first outsmart and outmaneuver the two armed guards who stand watch outside the building. i like how all of this takes time and how the director takes his time, allowing the tension to build instead of rushing into the action. we know these two guards are dead, but the way k12 builds up to killing them keeps us riveted and on the edge of seats.

k2’s crew shows up and charges the building and we get an intense chase through the city street with them pursuing leito. he jumps off of and threw things using parkour about as well as casino royale used it for the opening chase around the construction sight. it’s pretty amazing here, just like it was there. but unlike that movie, which only featured these astonishing moves for it’s opening action scene, district b13 features them throughout the entire film.

We deal with leito and his sister and the drug lord, Taha, captures her and brings her in to use against leito. we watch as leito fires back, bringing taha to the police, only to be locked up himself. and all of this is just an introduction to the character. a nice, lengthy, action-packed introduction.

next we meet a cop, damien, played by one of the twins from the jet li movie kiss of the dragon. here, he is undercover and ends up taking down the boss he is working for and all of his men. it’s another exciting action scene that ends in a shootout and being pulled up out of a small room by a helicopter. like leito’s story, this scene serves as an introduction to the damien character.

and then we are finally ready to start the real movie, about the bomb, damien is the cop who is asked to go into district b13 and diffuse it. leito is the prisoner of the police who they are willing to let go so that he can show damien around the city. only leito can’t know that he’s working with a cop, and so damien has to pose as a prisoner, escape, and then help leito escape as well.

that brings the two of them into district b13 together for the second half of the film. from here on in, one might expect the plot to be straightforward. two guys going up against a crime boss and his men, trying to get a bomb from them and diffuse it. only there are still plenty of twists to come, starting with them announcing to the crime boss that they are there and that one of them is a cop.

the movie never takes it’s plot for granted or gets lazy knowing that it doesn’t have to feature a clever plot to still be a cool movie. instead, it strives to get everything right, and that’s why what would otherwise be a standard plot ends up being loaded with little twists here. but still, the action and filmmaking technique, massive zoom ins and computerized moves around the streets at crazy speeds, are the main attractions. the action is so intense and hard core that it really does rival something like ong bak. thirty years ago they might have been pioneering great action in hong kong, but in the last five years or so it has been taken to a whole new level. this movie shows that. the action is off the charts and it is surrounded by a fun, somewhat campy plot to help drive it in the right direction.